MINNEAPOLIS, Minn.—For all of the talk about Villanova’s vaunted guard play, the deathblow to Boston College’s season was delivered by a forward.

A goaltended layup by Will Sheridan with three seconds remaining in overtime gave the top-seeded Wildcats the final margin in a 60-59 win over BC at the Hubert H. Humphrey Metrodome on Friday night, as the ACC’s newest ambassador became the final member of the conference to be sent packing in this postseason.

Playing his last game in maroon, senior forward Craig Smith had 14 points and 14 rebounds, while junior forward Jared Dudley chipped in 14 points of his own. Villanova senior guard Randy Foye, the Big East Player of the Year, did them one better, notching 29.

Nostalgic Big East lovers were treated to a low-scoring physical battle throughout, with plenty of contact and foul calls. BC could not take advantage, however, shooting just 8-of-17 at the charity stripe. The Eagles were also done in by 21 turnovers, caused mainly by Villanova’s pressuring the ball on defense.

“They did what they had to do,” said BC head coach Al Skinner after the game. “We accomplished what we needed to do, and that’s why the game ended up as it did.”

BC dominated the opening several minutes, as the hot shooting of junior guard Sean Marshall and steady defensive play staked the Eagles to a 9-0 lead. Marshall tallied BC’s first seven points—as many points as he logged in the Eagles’ first two tournament games.

Villanova head coach Jay Wright soon inserted one of his reserve big men to balance his four-guard lineup against the Eagles’ on-court quintet.

“We were having a tough time speeding them up,” said Wright.

The offensive momentum was slow for both teams throughout the opening half, as Villanova’s trademark perimeter game did not get going. The Wildcats did not hit any of their nine three-point attempts in the first half. BC opened up a 25-9 lead on threes from Louis Hinnant and Marshall on successive trips with just under five minutes to play in the half.

But Villanova launched a run of its own to climb back into the game. Still not hitting from beyond the arc, Foye instead knocked down some two-pointers to pull his team back within single digits.

The Eagles’ offense went cold in the final minutes and Villanova closed the half on a 15-3 run, during which BC’s only points came via Tyrese Rice free throws, to pull within 28-24 at the intermission.

Foye hit the Wildcats’ first three-ball of the night early in the second half to tie the game for the first time at 28 apiece. The half began sloppily for the Eagles with a slew of turnovers, but Villanova could not take advantage in the opening minutes.

BC began another run with an inside bucket by Smith with 14:55 to go—which moved him past Dana Barros and into second place on the school’s career scoring list.

Minutes later, the Eagles had a nine point lead again. Marshall found a cutting Sean Williams, who slammed it home despite being fouled. His free throw made it 43-34 in favor of BC with 9:37 to go.

But Villanova was far from done. Allan Ray (nine points) soon connected on his first three of the night. The Wildcats had pulled within one at 46-45 in the final four minutes, when Smith attempted a reverse layup. It wouldn’t go, but Williams was there for the put-back and the foul. His free throw was no good, but BC’s lead was out to three with just 3:07 remaining.

Showing the mark of the caliber of team it is, the Wildcats fought back ferociously. After trimming the BC lead to one, Foye was fouled on the ensuing possession, and hit both free throws, giving his team its first lead of the game at 49-48 with just 2:18 to play.

Foye got a running two to fall with 44 seconds remaining, pushing the lead out to 51-48. After a BC timeout, a Louis Hinnant three to tie the game would not fall, but the ensuing scramble for the rebound ended in a held ball with the possession arrow favoring BC.

Off the inbound pass, Dudley found enough space from the left wing to shoot a three. It found the bottom, tying the game at 51.

Given a chance at the last shot, Foye penetrated to the inside, only to find an open Kyle Lowry on the left wing. He got the shot off, but did not, however, account for the incoming Williams. No. 51 ‘s block sent the game into overtime tied at 51.

Villanova picked up in overtime where it had left off late in regulation. A three by Foye put the Wildcats up five, two minutes into the overtime. BC fought back, with buckets by Dudley and Smith, who could not convert a three-point play that would have tied the game with 2:02 to go.

Foye hit a runner to put his team up three again. Dudley responded with a quick two. Lowry went to the line for a one-and-one with 26 seconds left, and missed the front end, giving BC a chance for the lead.

Smith took it to the rack and got his shot to fall for what would be the final two of his 2,349 career points as an Eagle. BC moved ahead again, leading 59-58 with just 12.2 seconds showing on the clock.

Foye’s drive in the final seconds was blocked out of bounds by Williams with just 3.5 seconds left. But on the ensuing inbounds pass, Sheridan found himself open under the basket. Williams got his hands on another shot, but this time was whistled for goaltending, putting Villanova ahead for good with exactly three seconds to play.

Hinnant’s last attempt from well beyond the arc came up short, as the clock ran out on BC’s season and the top-seeded Wildcats moved on to the regional final. 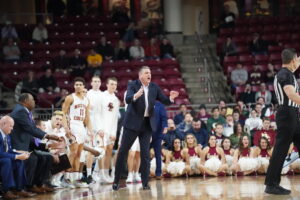 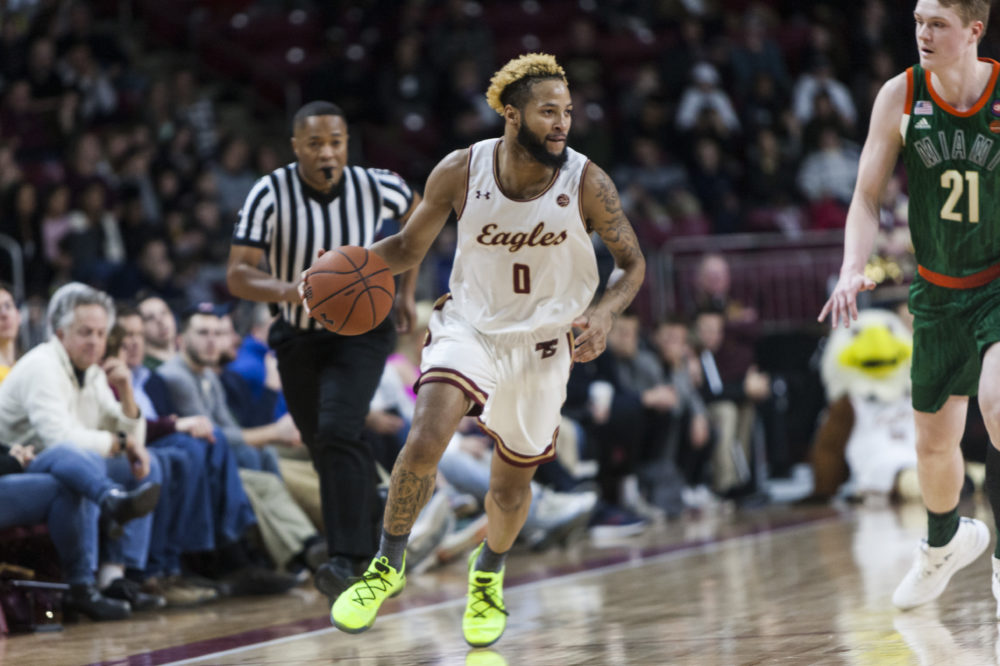