Administrators and the UGBC joined forces to review the rising trends of alcohol-related health dangers associated with campus concerts, and students responded with outrage.

On Oct. 5, the UGBC hosted a forum for students and administrators to come together to discuss the future of concerts at Boston College. The student population in attendance was largely composed of upperclassmen, who, having gone to concerts in past years, wished to express their frustration about the void they feel has been created this year in the absence of the Fall Concert.

Paul Chebator, interim dean of student development, emphasized that “this is a moratorium, not a ban.” The concert and all future concerts on campus are currently being examined due to an increase in the number of transports to local hospitals over the past couple of years. The review process was proposed in May and is expected to be completed by mid October, during which time, concerts have been placed on hold.

“It’s a relatively new phenomenon – this concept of pre-gaming, where people are drinking intensely before going to an event and are virtually legless by the time they get to the event,” Miceli said.

Patrick Rombalski, vice president of student affairs, made the argument that if it were any other issue, like food poisoning for example, that were causing 25 students to be sent to the hospital, students would be extremely concerned.

Members of the student body raised the question of how extensive the procedure is for determining whether or not an individual needs to be transported to the hospital, noting that there appear to be cases where students are transported who would probably be fine if they were left alone.

In response to this question, Chris Faherty, president of Eagle EMS and A&S ’13, spoke about the legal obligations regarding intoxicated individuals who are under the legal drinking age. It is a law that any individual who is under the age of 21 and has alcohol in his/her system is impaired, meaning that the individual is legally unable to make decisions. This places Eagle EMS in a particularly difficult position, Faherty said, because they do not want to send students to the hospital if it is not necessary, but they can also be held accountable for releasing students who are legally impaired.

If an individual is vomiting, Eagle EMS is not permitted to release the individual, even if his/her condition appears to improve. In recent years, Eagle EMS has been able to act as a student advocate, releasing intoxicated students who they determine are not in need of medical attention to a sober party rather than sending them to emergency rooms.

Overall, Faherty said, “Some students are not as intoxicated as others, but you’d be surprised how many pass out in the triage area.” It is ultimately at their discretion to determine who needs to be transported, and he said it is not common for students who do not need medical care to be transported to emergency rooms.

Another student concern was why concerts in particular are being targeted when there is evidence of excessive drinking associated with other events, especially football games. The administrators responded that the general scale of alcohol-related transports is much lower for football games. Chebator said that on a football weekend they may see as many as 12 transports, which is significantly lower than the average of 25 seen at last year’s concerts. The make-up of football games is also much more varied, and the medical attention required at football games ranges. The administration also actively tries to limit drinking before the games. “There’s an army of security at the Mods [on gamedays],” Chebator said.

Student suggestions for mitigating alcohol-related concerns included increasing alcohol education for all students and imposing tougher punishments on those who do not follow policy. Administrators said that these methods are typically not effective, however, and proposed instead their own goal to create a better weekend environment. They argued that much of the drive to drink comes from the environment in which students are placed.

The UGBC pointed out one effort that they have made to reduce pre-gaming for concerts was the barbeque hosted before the fall concert last year. Mike Kitlas, president of the UGBC and A&S ’12, discussed UGBC’s emphasis on “the event before the event.” He discussed efforts on the part of the UGBC to have smaller events immediately preceding large events like concerts, including speakers and barbeques.

Students did not just criticize the administration’s handling of the situation. Some were looking for ways in which they could become involved.Kitlas advised that the way for students to individually play a role in the return of the concert would be to encourage healthier habits among their friends. “Stand up for each other and voice your opinion,” he said. Kitlas suggested encouraging friends not to take that extra shot before leaving, for example, and that it is possible for all students to play a role in this way. ♦ 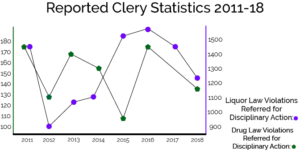