On March 13, 2013, Cardinal Jorge Mario Bergolio, S.J., became the first Jesuit to be elected as head of the Roman Catholic Church. While Boston College has rightly celebrated this joyful event, the University is now faced with the challenge of substantively acting on the ecological message of the new pontiff and the Catholic Church’s authentic teachings on climate change.

On March 13, 2013, Cardinal Jorge Mario Bergolio, S.J., became the first Jesuit to be elected as head of the Roman Catholic Church. While Boston College has rightly celebrated this joyful event, the University is now faced with the challenge of substantively acting on the ecological message of the new pontiff and the Catholic Church’s authentic teachings on climate change.

Shortly after his election, Pope Francis explained that he chose his papal name to honor St. Francis of Assisi, the patron saint of those who promote ecology, because Francis “loves and guards creation,” and humanity currently has “a relationship with creation that is not very good.” Days later, Pope Francis then reiterated the importance of creation care six times in his homily at his papal installation Mass. In one of the most pointed remarks, the Holy Father said, “Please, I would like to ask all those who have positions of responsibility in economic, political, and social life, and all men and women of goodwill: let us be ‘protectors’ of creation, protectors of God’s plan inscribed in nature, protectors of one another and of the environment.”

Given the status of BC as a premier Catholic, Jesuit institution, the University is in a unique “position of responsibility” to integrate Christian creation care into the life of the University. Although this responsibility must be lived out in a multitude of ways, one of the most important is through the management of the University’s endowment portfolio. This is particularly true in view of the Church’s authentic teaching on climate change and the role that fossil fuel corporations play in its proliferation.

The Catholic Church has explicitly and repeatedly identified climate change as a moral issue due to the fact that the consequences of climate change-which include food and water stresses, increased drought, higher disease rates, and more frequent severe weather events-are compromising key commitments of the Christian, Catholic faith (http://catholicclimatecovenant.org). In particular, Blessed Pope John Paul II, Pope Emeritus Benedict XVI, the U.S. Conference of Catholic Bishops, and the Society of Jesus recognize that the effects of climate change are compromising the Catholic commitments to protect and defend human life and dignity, exercise a fundamental option for the poor and vulnerable, and care for God’s good gift of creation. Based on this, the Catholic Church has called on people of faith and goodwill to meaningfully address climate change.

In order to avoid runaway global climate change, the majority of scientists agree that the average surface temperature of the planet must not rise more than two degrees celsius above pre-industrial levels. In order [to] achieve this, scientists further maintain that humanity can only emit 565 additional gigatons of carbon dioxide by the middle of the 21st century. Despite this, fossil fuel corporations currently possess 2,796 gigatons of carbon dioxide in their reserves-and plan [to] burn it all in the myopic pursuit of economic profit.

Given this situation, the University has an unequivocal “responsibility” to divest from the 200 publicly-traded fossil fuel companies in order to remain faithful to its stated Catholic, Jesuit mission. Divestment from fossil fuel corporations is clearly and wholly consistent with the stated Ethical Guidelines that purportedly guide the BC Trustee Investment and Endowment Committee, and the UGBC Senate recently passed R13.12.13, A Resolution to Call on the President and Board of Trustees of Boston College to Divest the University’s Endowment from Publicly-Traded Fossil Fuel Companies. Given this, University President Rev. William P. Leahy, S.J. and the BC Board of Trustees have both the precedent and obligation to pursue total and expedient divestment of the University’s endowment from fossil fuel corporations in order to fully live the school’s Catholic, Jesuit mission. 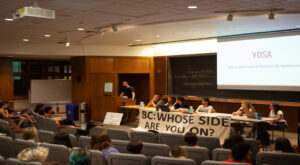