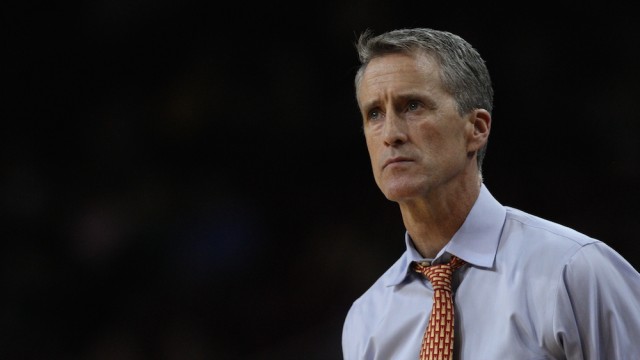 rad Bates wasn’t going to say it directly—as is the case with most of the nation’s athletic directors, especially those in major conferences, details and specifics can be somewhat of a rarity—but the number that concerned him most on Tuesday was eight. There were talks of matrices and weighted variables indicating the trajectory of Boston College’s men’s basketball program. Nothing mattered more when Bates informed former head coach Steve Donahue that he’d been fired, though, than the Eagles’ 8-24 record this season.

This BC team failed. A total of eight wins was simply unacceptable. When the season ended last Wednesday, it was up to Bates to determine how much of that failure was the responsibility of Donahue, and how much confidence he had that Donahue could turn things around. He decided that he didn’t have enough, so Donahue was shown the door.

Although he’s often referred to as a “great Xs and Os” guy—and he is—there were very tangible failures on the court this year for which Donahue was responsible, and they all contributed to one of the worst seasons in program history.

Here is how the wheels fell off, and where they haphazardly landed.

Unprepared from the start

t may seem like ages ago that this was a hot conversation topic, but college basketball underwent some significant changes in rule enforcement heading into the 2013-14 season. Hand-checks were finally going to be enforced, and Donahue’s team failed to adjust.

After the season-opening overtime loss at Providence, Donahue said that when the Eagles tried out their new defensive strategy—which will be addressed shortly—during preseason scrimmages with officials, everything went fine. The excessive hand-check calls didn’t come, BC’s defense played well, and the adjustment was promising. BC didn’t even get into the bonus. Other coaches called Donahue saying how much trouble they were having with defense under the new rule enforcement, and he didn’t understand.

So BC went down to Providence unprepared for what would be one of the ugliest games of the college basketball season. Six players fouled out, 55 fouls were called, and the teams combined for 60 free throws. When the Eagles needed to stop Bryce Cotton from scoring down the stretch, Donahue left sophomore guard Joe Rahon on an island only to get blown by time and time again, with Cotton either sinking a shot or heading to the line by driving straight past Rahon or a switching BC big in the pick-and-roll.

The Eagles, already a slow-moving and unsure train wreck on defense, were playing catch-up with the rest of the country, and they were doing it under the wrong scheme. Working off a perception of his team’s serious depth and versatility throughout the preseason, Donahue installed a switch-everything defense that also included formation shifts between trapping presses and zones. For the first two years with this squad, BC struggled to guard in its half-court man defense, so Donahue tried something new.

It went horribly wrong. Lonnie Jackson got hurt, Dennis Clifford wasn’t playing, Patrick Heckmann and Garland Owens were set on short leashes, and suddenly Ryan Anderson and Eddie Odio were stuck switching onto guards and attempting to box out much more athletic big men for 30-plus minutes, and they got gassed. Each loss early in the year was the result of allowing too many second-chance points, too many free throws, too many open paths to the rim, or a combination of all three.

“It’s been a hard transition for us,” Donahue said after a loss to Toledo in the third game of the season, “and way harder than I saw coming, because I didn’t see it in the first four scrimmages.”

So BC wasn’t ready to play when the season started, and the schedule became an unforgiving gauntlet from there. Hardly any legitimate adjustments were made during a home stand against Toledo and Florida Atlantic, with a loss in the first game and a narrow win in the second, and when the changes happened they were too late. There was a promising win against Washington at Madison Square Garden that hinted at the offense’s potential to make up for a porous defense with each player contributing, but that faded quickly.

The Eagles eventually stopped switching screens defensively, but they had to learn the new system on the fly against tough non-conference play and then their ACC opponents. It was practically a lost cause.

he one hope for BC, despite the atrocious defense and rebounding, was that maybe star guard Olivier Hanlan could help provide enough offense to make up for those shortfalls. It didn’t happen.

Hanlan mentioned repeatedly during the preseason that he was focusing more on his playmaking ability heading into the year. It’s something that NBA scouts had pointed out—everyone saw that Hanlan could score, but could he distribute?

“Last year I scored the ball a lot, but my assists per game were kind of low,” Hanlan said before the season. “I was really just working on that. Just coming off ball screens and making it easy for my teammates to get open shots and everything. Going and being at the Chris Paul camp and talking to Chris Paul—he’s the best in the league at finding his guys and picking his spots.”

Except the Eagles didn’t need Paul running the point, they needed Derrick Rose. Hanlan continually held off his aggressive scoring ability until the second half of games, choosing instead to dish the ball off his drives or coming off screens. He averaged more than 18 points per game, but there was potential for more. With other players struggling to score, it put BC at a disadvantage going into halftime. The Eagles either trailed unnecessarily or they didn’t lead by as much as they should have. There was a four-game stretch during the middle of the season in which the Eagles posted first-half point totals of 24 against Auburn, 17 against VCU, 25 against Harvard, and 17 against Clemson.

Donahue was asked about Hanlan’s mental shift to being more of a playmaker a few days before the season began, and he paused before answering. Sitting hunched over a chair in his office, he rubbed his hand across his face and talked slowly, with some concern.

“Yeah, I’d like to see him get more people involved, but he has a unique skill that we can’t overlook,” Donahue said. “He scores in different ways against almost anybody. He’s maybe our best standstill shooter as well. I don’t want to overdo it with trying to get everybody involved, because his natural instinct is to go by somebody and score. And if it’s the right decision, which a lot of times it is, there’s no reason for him to kick it to somebody else if he in turn has a high percentage shot.”

But Hanlan did kick it out, repeatedly, and Donahue was unable to change that.

he Eagles lost 10 games this season by five points or fewer. Although the team got off to a crippling start, things weren’t unsalvageable. Donahue didn’t do himself many favors with some of his decisions from the sideline, though.

The lineup of Rahon, Hanlan, Heckmann, Anderson, and K.C. Caudill played about a quarter of BC’s minutes during the last five games of the season, according to KenPom.com, but Heckmann and Caudill saw varying minutes all season. Despite plugging in just two new players into the rotation—freshmen Owens and Will Magarity—Donahue couldn’t settle on a reliable substitution pattern until late in the year. Heckmann and Owens especially, despite strong play at times, consistently had their minutes jerked around. Donahue planned on working with plenty of depth heading into the year, but when the actual games started BC rarely went further than seven-deep, with head-scratching combinations or rotations.

There was also, of course, the constant whistling. Rather than letting the BC offense flow off the instincts of his now veteran players, Donahue couldn’t stop himself from micromanaging possessions from his post on the sideline. His players couldn’t go long into a possession without checking the bench for his inevitable instruction—even offensive threats like Hanlan and Anderson.

The help defense also never saw significant improvement. BC allowed opponents to shoot 38 percent from beyond the arc, which ranked 317th in the country, according to KenPom.com, mainly because of horrendous rotations and a lack of communication. Opposing teams, on average, shot better than BC 3-point specialist Jackson, who had a tremendous year from long-range. BC’s current players were never going to become lockdown defenders in a man defense—except maybe Owens, who was rarely used to shut down opponents’ best scorers—but that doesn’t mean the help defense should have been as dreadful as it was. Even at the end of the year, a few swings of the ball could jumble the BC defense into a frenzy.

ight is the number that mattered most. Right behind that was 54-76, Donahue’s career record in Chestnut Hill. The firing wasn’t just about those numbers, though. This team failed, and it didn’t just fail because it didn’t win. It didn’t fail because of recruiting or attendance. It failed because its coach failed, repeatedly, to properly put his team in a position to win.