The Scene highlights 14 of the dance, music, theater, and other events taking place at BC this weekend for the 16th annual festival.

‘The Drowsy Chaperone’
Wednesday 4/23 to Saturday 4/26, 7:30 p.m., and Sunday 4/27, 2 p.m.
The Boston College theatre department will be presenting its spring show this weekend in Robsham, directed by professor Stuart J. Hecht. The story of The Drowsy Chaperone begins with a musical theater fan who plays his favorite musical record on a turntable, and the musical proceeds to come to life in his living room, telling the love story of a Broadway star. Tickets are $10 with a BC ID and are available at www.bc.edu/robsham or by calling 617-552-4002.

Inside The BC Studio: Anne Garefino
Thursday 4/24, 3:30 p.m.
Anne Garefino, the award-winning executive producer of South Park and the Broadway musical The Book of Mormon, is the recipient of the 2014 Arts Council Alumni Award for Artistic Achievement. Garefino, who graduated from Boston College in 1981 from the Carroll School of Management, will be making several appearances this weekend, the first being a live interview with professor Kerry Cronin this afternoon. The interview will take place in the Stokes Art Tent.

Student Gallery: Opening Reception
Thursday 4/24, 5 p.m.
Student artists will have their work on display this weekend in the Stokes Art Tent, including paintings, drawings, sculptures, and photographs. There will be an opening reception on Thursday, featuring Artists Talk, in which BC students will discuss their artistic experiences. In addition, the fourth floor of Devlin will be displaying even more student work with Inside the Studios: Work by Student Artists.

BC’s Best
Thursday 4/24, 8 p.m.
Student artists will showcase their musical talents on Thursday evening in O’Neill Plaza at BC’s Best, an event co-sponsored by Nights on the Heights, UGBC, and the Music Guild. The night will feature a Singer/Songwriter Competition, followed by Battle of the Bands at 9 p.m. Bobnoxious, Seaver’s Express, and Juice will be competing for the chance to open for Hoodie Allen at Modstock next Thursday.

Dance Showcase (Critic’s Choice)
Friday 4/25, 2 p.m.
The Arts Council collaborated with local professionals in the months leading up to this year’s Arts Fest to offer professional training to student dance groups, and their top choices will be featured in the Critic’s Choice showcase on Friday in O’Neill Plaza. Students will also have the opportunity to see performances of various dance groups in showcases scattered throughout the weekend.

Student Documentary Screenings
Friday 4/25, 7:30 p.m.
Emily Mervosh and Katyln Prentice, both A&S ’14, will be presenting their films, Genesis and Mile 21, respectively, in conjunction with the film studies department. The screenings, followed by a Q&A, will take place in Devlin 008.

BC Underground
Friday 4/25, 9 p.m.
The second annual BC Underground will take over O’Neill Plaza on Friday night. Students can see some of BC’s hidden talent in a lively and interactive setting. Electronic musicians, DJs, rappers, spoken word poets, break-dancers, and hip-hop dancers are among the acts that will be performing.

After Hours Theatre
Friday 4/25, 11 p.m.
Friday’s events will conclude with a series of 10-minute plays that are written, directed, and performed by BC students, taking place in O’Neill Plaza.

Voices of Imani Gospel Choir
Saturday 2/46, 12 p.m.
The gospel and praise-singing group Voices of Imani will be performing a number of its popular songs in the main tent in O’Neill Plaza on Saturday at noon.

A Cappella Showcase (Critic’s Choice)
Saturday 4/26, 2:45 p.m.
All eight of BC’s a cappella groups-The Acoustics, Against the Current, BC Shaan, B.E.A.T.S., the Bostonians, the Dynamics, the Heightsmen, and the Sharps-will perform throughout this weekend for Arts Fest 2014.

‘The Laughing Medusa’ Presents
Saturday 4/26, 5:30 p.m.
BC’s all-female literary magazine, The Laughing Medusa, is celebrating the release of its Spring 2014 issue on Saturday evening in the Fulton Honors Library. The free event will feature student poetry readings and displayed artwork.

Dancing With bOp!
Saturday 4/26, 8 p.m.
The BC bOp! jazz ensemble will be performing alongside various dance groups on Saturday, including Dance Ensemble, the Dance Organization of Boston College, Golden Eagles Dance Team, Fuego del Corazon, BC Irish Dance, Phaymus, UPrising, MASTI, and Full Swing. The event, which will take place on O’Neill Plaza, is free to BC students with an ID and is $15 at the door for the general public. 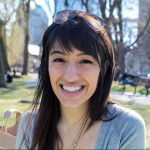 Ariana Igneri was the Associate Arts & Review editor at The Heights in 2014, where she enjoyed writing about boy bands, ballet, and other finer things. Follow her on Twitter at @arianaigneri.