In no particular order, here are some of the ups and downs of BC sports from 2013-14.

Johnny Gaudreau, Bill Arnold, and Kevin Hayes combined for 134 points as the most dangerous line in college hockey this season. All three were top-five scorers in NCAA DI hockey, with Gaudreau and Hayes coming in first and second. The same went for assists, with Gaudreau in first, Arnold tied for second, and Hayes in fourth.

Isaac Normesinu slalomed through Notre Dame’s defense to open the scoring with a stunning individual effort from more than 18 yards out. While Harrison Shipp, who now plies his trade for the Chicago Fire, struck back seconds later, Ed Kelly’s team held on to tie the then-No. 2 team and eventual College Cup winners, 1-1.

No. 1 Syracuse was 25-0 coming into its matchup with an Eagles team grieving the loss of Dick Kelley that had lost five straight games. While Boston College had fallen to the Orange one month earlier, the Eagles came back after being down in the second half. The win was a bright spot for a squad that won just eight games.

Under Steve Donahue, the men’s basketball team lost 24 games in 2013-14, the largest single-season loss total in program history. With the teams’ season concluding after a crushing overtime loss at the hands of Georgia Tech, the athletic department made the decision to fire Donahue less than one week after the defeat.

McKenzie Meehan hit teams for 20 goals in 23 games for the BC women’s soccer team, before netting six goals at the CONCACAF Women’s Under-20 Championships. BC was helped to the NCAA Tournament’s Elite Eight by the play of the sophomore striker, while the Americans won the gold medal and qualified for The World Cup.

The Eagles, who were 14-27 going into a three-game series with Maryland, took all three games from the Terps for their first series sweep since 2012. Led by Chris Shaw, who was six for 11 at the plate, and Andrew Chin, John Gorman, and Jeff Burke on the mound, the Eagles outscored the Terps 17-7, finishing the series with the Wounded Warrior game.

Andre Williams started all 13 games for Boston College, grinding out 2,177 yards on 355 carries, the fifth most single-season rushing yards in NCAA history. He recorded a game-high, conference-record 339 yards against NC State, won the Doak Walker Award for the nation’s best running back, and finished in fourth as a Heisman finalist.

The Eagles, after beating UMass Lowell in the Northeast Regional, advanced to Philadelphia and the Frozen Four only to be stopped in their tracks by eventual champion Union. The 5-4 loss was a fight to the finish, with three goals scored in the last two minutes of play, but the Eagles were unable to complete their comeback.

Tory Speer has led the softball team in its first winning season since 2008 through her play in the batter’s box and behind the plate. The senior captain set a new program record for career home runs, when she tallied her 38th in the team’s first sweep of the season against Virginia. Speer’s captaincy has spurred BC to a 29-19 mark so far.

After becoming bowl eligible to end a two-year absence from postseason play, the football team traveled to the Advocare V100 Independence Bowl. Pitted up against Ka’Deem Carey and the Arizona Wildcats, the Eagles struggled to get anything going offensively. Steve Addazio’s first season in charge ended in a 42-19 loss with a 7-6 record. 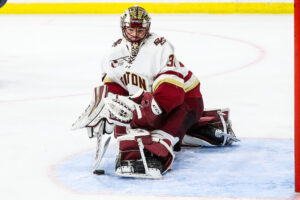 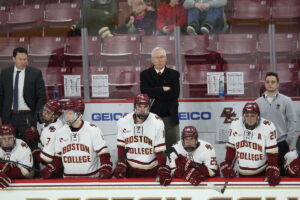