Home » BC Dining Serves Up The Changes Students Want 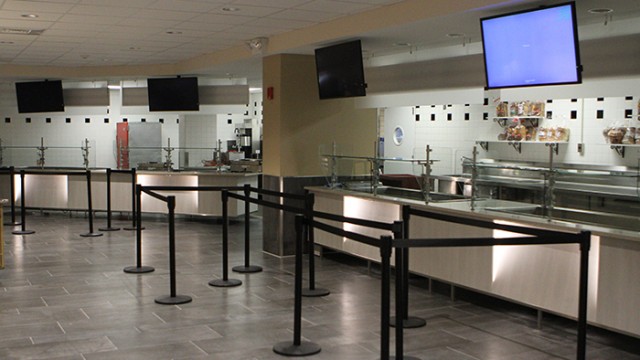 BC Dining Serves Up The Changes Students Want

Students returning to Chestnut Hill this week after months away no doubt encountered many changes: they moved into new dorms, perhaps met new roommates, and bought new books for new courses. In addition to these anticipated changes, however, were a few surprises, several of which can be attributed to BC Dining.

Perhaps the most dramatic difference is the renovated Eagles Nest, which no longer has massive islands containing the cash registers and soda machines and instead features a great deal more open space, along with TV screen menus and updated dining options, including iced coffee. Addie’s has also received a facelift, and the perplexing and traffic-inducing line arrangement has been redone to promote efficiency and dispel confusion. Addie’s, too, has updated its coffee options, now offering specialty drinks, which can be purchased with regular meal plan money.

Arguably the most widely appreciated change, however, is the replacement of Dean’s Beans coffee with Equal Exchange, which was previously used only in Hillside, in both McElroy and Corcoran Commons.

While students may celebrate these updates, they should also remember who is responsible—BC Dining, a University institution that has long paid remarkable attention to the student experience and done its best to improve when possible. BC Dining and its employees take great care to identify those things about the dining experience at BC that students love, as well as the less popular elements. Switching the coffee in the main dining halls to Equal Exchange is not a pleasant coincidence, but rather a deliberate response to countless student complaints. Few other organizations on campus impact students’ lives so frequently, and BC Dining acknowledges this by seeking out and responding to feedback with impressive regularity and efficiency.