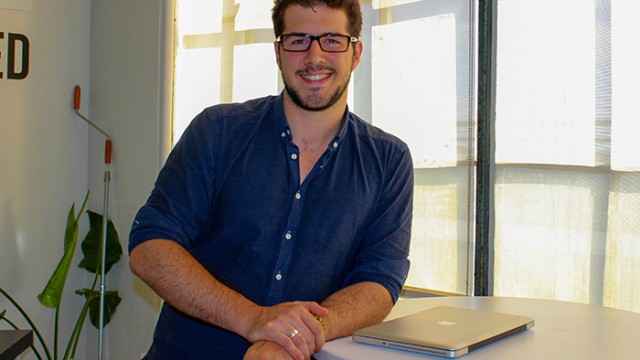 Walking down Newbury St., shoppers are bombarded by countless ads for various high-end boutiques, many of which do not apply to each shopper. Now, however, there is a technology that could identify certain characteristics of an individual shopper and display a personalized ad based off of those characteristics.

Real Life Analytics, a Boston-based startup, has created a demographic detection software that will allow retail stores to accurately collect data on the age, sex, and gender of customers entering the store and create a more targeted advertising campaign.

“We wanted to create an ad network that would personalize brands,” said Robert DeFilippi, co-founder and COO of Real Life Analytics. “Something that would enable retailers to really connect with their perceived consumer instead of throwing some stuff out there and hoping something sticks.”

DeFilippi said that ads offline are still sold the exact same way they have been since advertising first started. Instead, the founders of Real Life Analytics wanted to create an offline ad network that would make ads responsive and in real time, much like Google’s AdWords. By using the demographic detecting software, retailers would be able to figure out the demographic that visited their stores and could then adjust their ads and billboards accordingly.

When DiFillipi was in London, England, he and his friends were walking down Regent Street and they saw an ad written in Chinese selling apartments. Although he realized there might be some number of people in London who spoke Mandarin, he knew that there could be a much better placement for such an ad.

“We got to talking, and we thought, ‘Why can’t we advertise on these billboards like Google does online?’” he said, referencing the personalized ads Google sells through AdWords.

Simply put, retailers would have a vast amount of data about the type of people that visited their stores, and could possibly even tell what the demographic would be like spread out over the different seasons, or days of the week. If the data showed that mostly men visited the stores on the weekends while women were the primary customers during the week, the store would know to place ads on the weekend that would target men, and use ads during the week that would target women.

DiFilippi stressed that their system doesn’t invade a shopper’s privacy in any way, despite any fears that consumers might have. Real Life Analytics isn’t in the business to collect names from customers, since that information is already volunteered when a credit card is swiped.

“We simply don’t store any information,” says DeFilippi. “We don’t process any images. We also comply with all the privacy laws in the U.S.—we aren’t in the business of trying to find people’s names or anything like that. We just want to know that demographic so we can give them ads based on that.”

Real Life Analytics is part of MassChallenge, a massive startup incubator that culls through thousands of startups, eventually bringing together 128 finalists who compete for a million dollars in cash prizes. MassChallenge sets up meetings for the startups with different mentors and financial backers, and in the process creates an atmosphere that really encourages collaboration. DeFilippi stressed the importance of the inspiration that being at MassChallenge provides, as opposed to the networking opportunities that are set up.

People at MassChallenge are certainly smart, qualified, and driven, and come from all over, DeFilippi said. He said it’s really a blessing to be there, because one can see people from all over the world working hard and trying to accomplish something bigger than themselves.

“You can network anywhere, but you don’t get to see this kind of talent anywhere else,” DeFilippi said.

Real Life Analytics, like many Boston based startups, has built its initial employee base from interns, primarily college students. Paul Howard, CSOM ’17, started working at Real Life Analytics at the end of July, and said that working as a BC student has been a great experience.

“A lot of the startups in Boston are looking for anyone with a background in marketing, economics, or computer science,” Howard said.  “I came on as a marketing intern, did social media and stuff like that, but since then it’s expanded a little more to learning more about the company.”

For Howard, the biggest allure of interning for a startup is the fact that he has a much bigger responsibility. Even as a college student with a limited amount of experience, he is expected to go beyond his marketing responsibilities and work with social media, do research, and attend meetings. Working for a startup is an excellent way for students to have a larger role in a company, he said.

“Unless you’re the CEO you don’t really get a lot of say in anything, but he [DeFillipi] had us as interns and says, ‘Hey, I want you to look into this and see where it can go,’ and we get to go do all the research and talk to people and see where it could go,” Howard said. “It’s really cool because I can do a bit of everything.”

startups
Tim McGraw’s ‘Overrated,’ And More Singles This Week
Programming Board Looks To Mix Best Of The Past With Something New