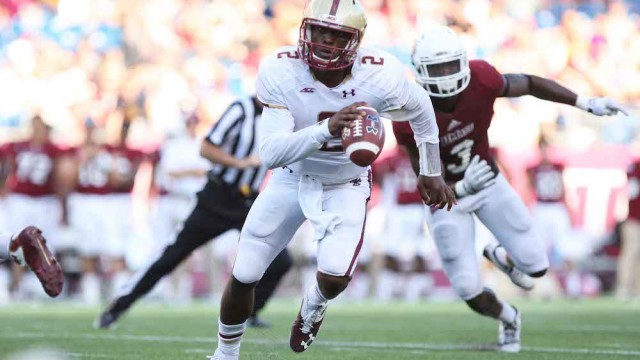 f you’ve followed Boston College football for the past, decade, you were probably caught off guard when, on his second snap as quarterback, Tyler Murphy ran for 13 yards. By the end of the game, he ran 12 more times for 118 yards and a touchdown. Of course, the hype for Murphy was already there. Even though everyone knows his pedigree, it was still strange to see a BC signal caller get out of the pocket and look comfortable.

The Eagles have not had a quarterback that can air it out and gain yardage on the turf since Dominique Davis in 2008. Murphy went to Florida for four years, but was redshirted as a freshman and is now a graduate student at BC with one year of eligibility remaining. Head coach Steve Addazio recruited the Wethersfield High School football star when he was the offensive coordinator for the Gators. To build a relationship with his offensive line, he baked them cookies and played video games. He saw the field at Florida last year, but his season ended due to a shoulder injury. During the spring, he established himself as the starting quarterback—but here’s something you don’t know about his past.

In the 8th grade, Murphy’s Pop Warner team played in the national championship for American Youth Football, which was held at the University of Arizona. His team lost to Dale City, Va. by three points.

If he were less humble, he would pin the loss on a lack of preparation, because in middle school, there’s very little tape. The looks Dale City threw his way may have confused him.

At the collegiate level though, Murphy has a bit more access to film. Even as a backup at Florida for three seasons, he would watch tape of the opposition.

“Enough to the point where I was comfortable, and usually, I would always be paranoid until warmups,” Murphy said. “There’d be nerves, jitters, I’d be anxious, but to give you a time limit—I’d be a liar no matter what I say.”

The Wethersfield, Conn. native watches at least an hour of film each day to get a grasp on what the opposition does on each down. Playing against UMass meant little tape was available for him to study. The Minutemen changed coaching staffs, and while Murphy watched tape of their spring game, little could be taken from it.

A non-conference matchup is an opportunity to prepare for ACC competition, though, and for Murphy, a better way to get acquainted with his offense. While the offense seemed to click against the Minutemen’s defense, it was never that simple.

In the spring game, Murphy traded time with quarterbacks Darius Wade and James Walsh, who has since left the football program. Murphy was the best of the bunch. Smooth in the pocket and at ease when forced to roll out, his footwork and vision down field gave Addazio no choice but to name him the starter.

Over the summer, he has been perfecting the playbook and watching himself on film to account for the details.

He gave the ESPN camera crew at Gillette Stadium on Saturday a tough time, faking them out on multiple occasions. Murphy’s versatility lends Addazio’s offense another dimension. What was a handoff to Andre Williams or pass to Alex Amidon game plan has turned into a multi-pronged and unpredictable assault going forward—which defined Murphy’s role at Wethersfield High School.

s a quarterback, running back, and kick returner in high school, not to mention a school-record holder in the triple jump, he leaned on the athleticism that he developed at 6:30 a.m. workouts to own opposing defenses. He was an all-state return man, who once scored six touchdowns in a game, which included taking back a kick and a punt for a score. His high school head coach, John Campanello, let Murphy do his thing in high school, though that had to change in college.

“I kind of became a run-first quarterback, throw second,” Murphy said. “When I got down to Florida, that’s when things had to switch up, because everybody’s just as fast as you, if not faster.”

Murphy had adapted to pocket passing. Over the summer, he picked up the tendencies of some of the professional quarterbacks he emulates from watching film of Tom Brady, Russell Wilson, and Drew Brees.

“Tom Brady’s so smooth in the pocket,” Murphy said. “He doesn’t panic if there’s a rusher coming at him. He’ll just step out of the way and let his line pick them up. His delivery—he always has his shoulders level. He’s always using his hips to help with his throwing, he doesn’t really throw with his arm much. He uses his body, which allows for prettier balls and more accurate balls.”

Murphy admires Russell Wilson’s knack for extending plays and throwing on the run, because as good as Murphy’s legs are, there is a lot of emphasis on playing within the pocket. In practice, one drill sticks Murphy in between four cones with a coach in front, who points in different directions, so that he can become a great passer. So much work on that makes it easy to forget that he has his legs to scramble. There are times that Addazio has to remind Murphy about the extra piece of his game.

Tips and reminders like that are free flowing among BC’s offense, especially with the quarterbacks. The trio of signal callers study the playbook together to make sure everyone is on the same page. Murphy’s football IQ and experience helps him teach his freshmen how to be leaders—something Murphy is still learning.

eadership is complex, though. There are those who approach situations with a flamboyant confidence, like Jameis Winston, and those who use character,hard work, and a win-first mentality to get things done, like Tom Brady. The best leaders do it all, but most importantly, if they tell someone to do something, they will do it.

“I’m not one of those big rah-rah guys, and coach Addazio’s gotten onto me about that,” Murphy said. “When it’s time to be a rah-rah guy, I have to step up and do that.”

As a field general, Murphy must deliver instructions to teammates and motivate those around him. Murphy did not meet the criteria of an official team captain, which required players to be in the program for at least a season, but he’ll have to act like one. Even though sophomores like Myles Willis and Tyler Rouse have been at BC longer than he has, Murphy has been a student-athlete in a major football conference longer than they have.

The above pertains to the aforementioned Wade and Flutie. While Murphy did not have the experience of training his successor in high school, who was a slot receiver, he did have to compete with Wade in the spring, and he now mentors both in a two-way relationship.

“Anytime, they’re willing to say something, I’m definitely open to listen, and evaluate, and watch the film, and really just take it as if they were Coach Day telling me something,” Murphy said.

There is little time left for learning, though, and Murphy will be the first to tell you that the season goes by in a flash. For a young team with dreams of Charlotte, N.C., it will need a quarterback, who has running backs behind him that have been on Chestnut Hill longer, to step up regardless of a squad status. Murphy not only has to run the offense, but control it. When necessary, he’ll have to crack down on teammates to get them in the right position. At BC, the all-state returner will lead a young offense, and with a bit more preparation available to him, perhaps he won’t come up three points short in his next championship game.

Alex Fairchild was the Online Manager of The Heights in 2015 and Assistant Sports Editor in 2014. He optioned his Football Manager life for a real job with the Boston College men's soccer team, which takes him away from his family and friends even more. You can follow him on Twitter @alexsfairchild.