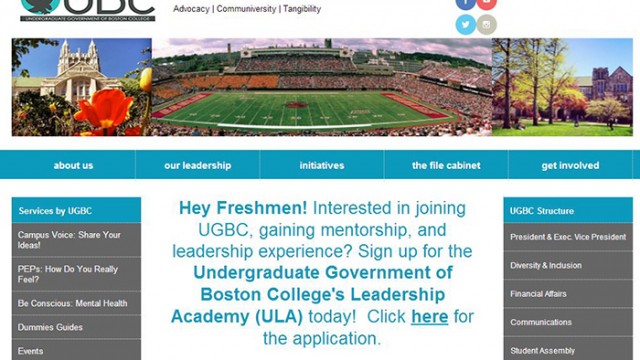 In an effort to open up the Undergraduate Government of Boston College (UGBC) to the students it represents and to fulfill a primary campaign promise, the organization’s new administration revamped its main website over the summer to give students a one-stop shop for UGBC services and campus resources.

The new site features two columns on the homepage—one that lists links to general information about UGBC and its structure, and another that includes links to UGBC services, campus resources, and other sites that the organization maintains.

The redesign is the latest in a number of steps UGBC has taken in the past few years to increase its web presence to better serve students.

Over the summer, the organization created ‘Dummies’ Guides’ to explain University policies to students in simple terms. These are accessible via the site’s homepage, as are links to academic and GLBTQ resources and a new mental health blog, ‘Be Conscious.’

The BC Textbook Exchange and Campus Voice, both new services offered by UGBC this year, are accessible via the main site. BC Textbook Exchange, one of the first initiatives completed by the new administration, allows students to buy and sell books among themselves or compare prices from a variety of third party sites, such as Amazon, Chegg, and Valore.

On Campus Voice, launched in the spring, students can post ideas or suggestions and vote on others’. Once a post receives at least 50 votes, the Student Assembly (SA) will respond to the suggestion.

In another push toward responsiveness, contact information for each of the 50 senators is listed on the new main website under the committee on which that senator serves. The site’s homepage also features a standard contact form, should students not know where to direct general questions.

In their February campaign to lead UGBC, President Nanci Fiore-Chettiar and Executive Vice President Chris Marchese, both A&S ’15, critiqued the now-former administration on its failure to make available to students information about the organization and its financial and legislative operations. Information about SA proceedings, for instance, was buried or non-existent and contact information for student senators could not be found.

Unlike in past years, this administration hopes to constantly update the site with information about ongoing initiatives, UGBC events, and SA proceedings. An event calendar will soon be filled with various UGBC programs.

“The biggest thing we want this site to do it to convey what UGBC is doing on a weekly basis,” Marchese said. “As a result it needs to be updated on a weekly basis, which is something that’s really new for UGBC. In the past the website usually was updated in August and then stay[ed] that way through the following year. We are looking to change that.”

Most important for Marchese’s goal of increased transparency are two new features: the “To Do List” and what the organization calls “The File Cabinet,” a subpage that houses all of UGBC’s public documents.

Attendance records from every Sunday night SA meeting will be made available online for students’ viewing. This year, roll call will be taken twice—at the beginning and end of meetings—to ensure that senators remain present for the meeting’s duration. Last year, a large number of senators often failed to attend SA meetings or would leave shortly after attendance was taken, prompting this administration to take steps to prevent a similar situation.

In addition, the “File Cabinet” will include monthly financial documents, breaking down how much and on what the organization spent its budget in a given month. The UGBC constitution, SA Standing Rules, and voting records of senators can also be found there.

The “To Do List” will show progress updates on UGBC’s main initiatives. During their spring campaign Marchese and Fiore-Chettiar outlined a substantial platform that organized initiatives into tiers, based on the time required to achieve each. As pledged during election season, their administration has rehashed that entire platform on the website, with updates on the status of each initiative.

“We hope to show that Nanci and I are really trying to deliver on our campaign promises, so all of our campaign platform points are up [there] and we show you where we’re at with [each],” Marchese said.

To deliver on those promises, Marchese acknowledged a high level of coordination between UGBC departments is required. A process for updating the site with correspondence from the executive departments has been created. The organization is currently searching for a new webmaster to maintain the site at least once a weekly basis and whenever else necessary.

The organization plans to drive student traffic to the site during the first few weeks of the semester. All UGBC t-shirts and other printed materials will include the website address this year, which, according to Marchese, has not been done in the past. In the coming weeks his administration plans to publicize the new site and attract visitors via a social media blitz and by handing out fliers to students in the dining halls and across campus.

UGBC
BC Dining Serves Up The Changes Students Want
Maroon 5 May Be On The Map, But Will Fans Follow?