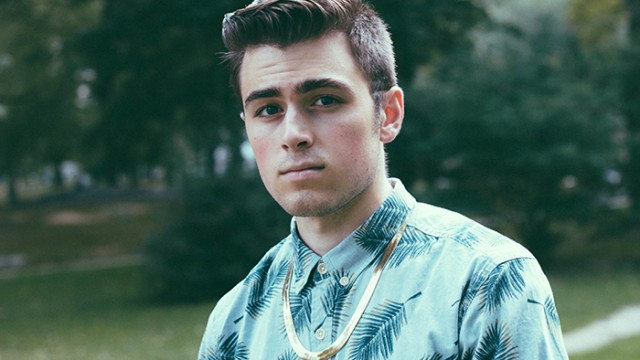 While William Bolton, CSOM ’16, probably won’t ever reveal where he buys his bright, uniquely patterned button downs, the Boston College artist is always eager to talk about his music, including his newly released record, Summer Breeze—which just happens to be as colorful as his wardrobe.

Bolton quickly created a name for himself during his first two years on campus. He was a business student double majoring in Perspectives, showing an extraordinary propensity for camo print pants, and as it would happen, music. He came to BC from Detroit, and he brought his Motown roots with him to Boston. Initially recording under the moniker Times New Roman, Bolton offered a fresh take on the neo-soul genre. He installed a recording studio in the closet of his eight-man in Vanderslice Hall and started performing concerts on campus wherever he found the space (including two performances in the Mods last semester, which raised a few eyebrows at the Office of Residential Life when The Heights ran a review of one). Bolton was a disruptor, and he had big plans to shake up the University’s independent music scene.

Bolton didn’t fall in love with playing music until he was 11. His two instrumentally inclined brothers did expose him to piano, drums, and guitar at a young age, but he didn’t care for the theory behind it all—he wasn’t interested in reading notes.

His mother, however, wasn’t ready to let him give up. Bolton recalls how she persuaded him to take one guitar lesson, promising that if he didn’t like it, he wouldn’t have to go back—but he did go back, again and again, building a connection with his teacher, Eric Gustavson, as well as with his electric guitar. “It sounded so cool,” Bolton said. “I’d come home, sit in my basement, and play for hours.”

Bolton became obsessed with the guitar, to the point where he wrote research papers about it and even tried his hand at building a couple with his grandpa. He also started to write songs and record beats using software and equipment that one of his siblings left behind after leaving for college.

Inspired by Radiohead—whose CDs his brother would play in the car on their way to school—and by Mayer Hawthorne, a hip-hop-soul singer with an old but distinctly modern feel, Bolton defined his characteristic style before coming to BC. He developed an ear for retro, classic music, sampling jazz and funk on his songs, but blending it with more contemporary elements like R&B beats and rap.

Bolton considers Summer Breeze, released at the end of August, to be an undiluted representation of this sound that he spent the past few years honing. While last fall’s Satisfaction EP was musically consistent in the end, his approach wasn’t very refined. He recorded 20 songs, only four of which complemented each other. “I focused a lot more on one sound for this project, rather than making a bunch of stuff and picking and choosing,” Bolton said of his latest record. “It’s a very cohesive and timeless work.”

Like its tracks, the visual aesthetic to Bolton’s album is both fresh and vintage. Billy Foshay, CSOM ’16—the photographer behind the project’s artwork and promotional footage and one of the founders of Exposure Productions—had full creative leeway when it came to the pictures. “He really had a sense of what I wanted,” Bolton said.

Aptly named Summer Breeze, Bolton’s album is sunny and upbeat, flowing from one song to the next as effortlessly as warm days long gone. He wanted to make something that harkened to the past, but that was also relatable and happy.

He recorded Summer Breeze to have the feel of a daydream. The concept for the record came to Bolton while sick in class last semester. He struggled with his health, and he frequently found himself staring off in class. After more than one bad day, Bolton turned to music as a remedy. “I would make these beats in my room just to feel better,” he said. “So really, the album isn’t about what my life was or is like—it’s what I wish it was like.”

From start to finish, Summer Breeze took Bolton six months to complete. Although he had some beats lying around from the winter, the bulk of the album was recorded over the summer while Bolton was interning in New York City with producer Ryan Leslie. “He was the coolest guy ever—a huge mentor to me,” Bolton said. He met Leslie through mutual friend Shalin Mehta, CSOM ’16.

Together, Bolton and Leslie developed an app called DMM, which allows artists to connect to their fans by collecting listener data. Bolton, who currently uses the app to connect with his own fans, said that he’s had about 2,000 people download Summer Breeze from his website, and he can see, on a map, where each of his supporters is from. He can even thank them via text, phone call, or email for backing his work.

Cultivating a strong base of devotees is a goal for Bolton. He has his phone number posted on his SoundCloud page as well as at the end of his music videos, giving his followers something personal to latch on to. “That’s what’s going to keep me being able to do this for a really long time,” he said.

Bolton’s popularity is swiftly growing both here in the U.S. and internationally. His first single from the album, “Let’s Stay Together”—which took no more than an hour to finish—made it to the top of the charts at egoFM, a new indie radio station catering to five cities in Germany, suggesting that European hipsters don’t just like beer—they like Bolton, too.

Although his plans aren’t definite yet, the positive global response to “Let’s Stay Together” has Bolton hoping to study abroad in England before graduating from BC, taking some time to tour and perform in London. He’s kept in touch with various record labels there and knows a manager who’s well connected in Britain.

For now, Bolton’s keeping to some immediate plans: another CD and a video blog featuring live performances, behind-the-scenes material, and possibly explanations to what inspires his tracks. The commercial success has been nice, but Bolton says he’s just proud to be creating songs—songs that he can jump around to in his room or dance to with his friends. The music has evolved over the past couple years, but the motives, according to Bolton, have hardly changed.

“I make music so I can be really happy,” Bolton said. “All I want is to have a good time.”