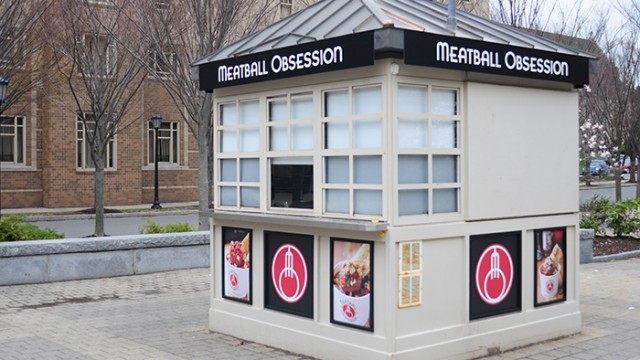 The Scary Truth About Meatball Obsession

The following epistle was found in a bush outside of Corcoran Commons.

I don’t have much time. Their agents are watching everywhere. There’s a chance that by the time anyone reads this I’ll have been turned into one of those things. But people must see the truth. There’s something going on with Meatball Obsession.

It began quietly … almost too quietly. When Meatball Obsession first opened, it raised a collective eyebrow of confusion. “Meatballs?” everyone seemed to ask. It’s not even that it wasn’t the best use of that space, far from it. The creation of Meatball Obsession (pause for emphasis—“MEATBALL” “OBSESSION”) defies any reasonable explanation. How many hundreds of more logical ideas must have been deemed unusable for the powers-that-be to settle on something so positively loony? It was a rhetorical question that lacked anything close to a believable answer. So, Meatball Obsession then faded from public consciousness about as swiftly as it had entered it, jokingly visited as a small shrine to the University’s caricaturesque out-of-touch-ness. No one pays it much mind, and certainly no one is leading a charge to replace it with something better.

In this, the administration got exactly what it wanted. The school banked on the fact that you, the student body, have come to accept wholly your lot in life that your school’s space is not for you to use. Yet, I doubt Meatball Obsession was intended as a stunt for the school to see just how ludicrous a turnkey it could get away with. There had to be some significance to its decision. A meatball stand? Why would they narcotize an entire student body into accepting the conversion of a prime Boston College location into something as genuinely surrealist as a store with a pathological fixation on a random food product? How could administrative authorities justify it even to themselves?

Sometimes the bitterest pills come wrapped in the most peculiarly disarming balls of meat. Just ask your dog. There had to be more to the story. And so, I grew obsessed with Meatball Obsession. I watched it day and night. I watched all the future students and their parents buying meatballs in droves. I tracked the movement of the workers. And a few days in, something struck me. Not once did any of the employees leave the kiosk to get more meatballs. They seemed to have an endless supply of meatballs. But where were they coming from? One night I broke in to Meatball Obsession to see the mysterious source of all of these meatballs. Sure enough, the kiosk revealed a small door in the ground that led me into a dark cave.

A grizzly clue awaited me as I descended into the cave. I saw the remains of a struggle, and a tattered piece of a jacket. It read “The No- Fa-” and was smeared with dried marinara. From the looks of the marinara trail, someone had tried to escape. As I followed the trail, I heard grinding. Rounding a corner, I saw the machine. It was an industrial-size meat grinder chopping up what looked like BC students. Yet, these were not BC students anymore. Their bodies had atrophied into what looked like steak—their blood was chunky and smelled like an Italian restaurant. Still, I recognized some of these unfortunate souls. I had seen them as early as freshman year, full of optimism, many with vibrant and unique personalities that had been desiccated and ground down over the years. And here they were, being ground down into ground beef. This visceral literal-ization of their plight turned my stomach, and I raced for the exit. Stumbling through the dark passageways, I found myself running up a long conveyor belt. I wondered with horror what the source of this conveyor belt would be. At the conveyor belt’s starting point, I climbed through a trap door only to realize that I stood on the field of Alumni Stadium. Next to me was the stage, which only days before had been used for graduation. This trap door was located just at the right of the stage, directly in the path of graduates collecting their diplomas.

This sinister plot has been in motion for years. The student body has been directed and coerced toward a catatonic state where questions are a thing of the past. The first two phases are complete. After years of questions gone unanswered, the school set about convincing the student body that questions were not worth asking. Yet, the only way the administration can achieve total control is through the third phase—eliminate the capacity for questioning within us. So, they will feed us ourselves in the form of homogenized meatball until we all become the meatball inside and out. Then, it’s off to the conveyor belt and down into the cave for harvesting.

We have become a snake that eats its own tail. We were turned away from the apple of knowledge because this school prefers to feed on itself, the narcissistic sustenance of total sameness and homogeneity. The student body is drawn into a consumptive circle until no shred of the original creature is visible—it remains only an auto-digested ball of flesh and red ooze. All the administration has to do is scoop that ball into a cup and sic it onto unsuspecting future students and parents alike. The snake will then continue to have more of itself to digest, perpetuating this navel-gazing gluttony of the self for the rest of time. This is the University’s utopia, and we are lucky enough to be food for it. Authorities will say I saw only what I wanted to see, that I bent the truth to fit the conveniences of my narrative. But I know what I saw. The snake is still down there, grinding, rolling, and cooking away.

The rest is unreadable, smeared with dried marinara.