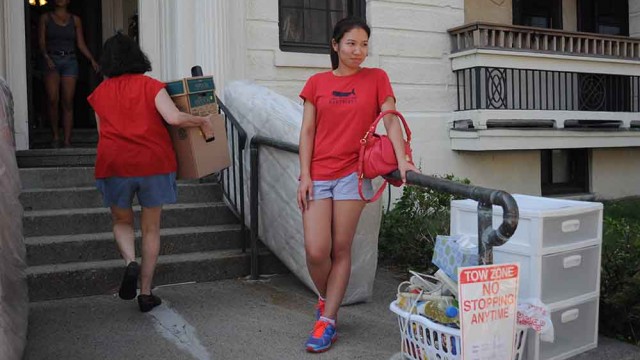 Anyone who has ever had a younger sibling knows the trick:

When the glass of milk hits the kitchen floor and Mom or Dad comes to check it out, point the finger at the kid across the table.

As controversies regarding off-campus student housing continue to mount—following a Boston Globe series that exposed rampant overcrowding and safety violations in neighborhoods like Brighton and Allston—it seems that there may be yet another opportunity for city residents to point the finger at the area’s younger college students, saying that if those kids weren’t here, those neighborhoods wouldn’t be having trouble, Allston Christmas would be a thing of the past, and everyone would be able to enjoy the pristine streets of an area formerly overrun by college kids.

But anyone who read the Globe series knows that the newspaper’s investigators captured the real picture: College students are victims of a flawed system, in which their own numbers, the carelessness of landlords, and high rents are working against them.

College students are victims of this system just as much as the family who lives down the street from them, if not more so. Boston’s students are invited by colleges across the region to call this city home, only to find when they get here that there is nowhere to reasonably put them, as colleges generally do not have anywhere close to the on-campus residential space required to house these massive populations.

Meanwhile, as the Globe series found, landlords throughout Boston consistently ignore a city rule that bans more than four full-time undergraduates from sharing a house or apartment.

College students themselves have no incentive to obey the rule. In fact, they have an incentive to disobey it—only by shirking the regulation can they possibly hope to afford exorbitant rents.

Should the rule suddenly be more strictly enforced, it is hard to imagine where college students would be forced to scatter—a change that could have consequences both for their proximity to their respective schools and for their bank accounts.

Certainly, there is plenty for which city residents can blame college students. They are noisy, often drunk, and frequently disrespectful of private property. Non-college residents of Boston, however, should strive to remember all of the good that students bring to this city—inventions, startups, and philanthropic work.

At Boston College alone, members of volunteer organizations like 4Boston take large amounts of time out of their weeks to assist those in need, students launch fast-rising startups like Jebbit, and undergraduates contribute to stimulating academic research that will reside in Boston for years to come.

To further improve their communities, college students should strive to take pride in where they live—just as they take pride in their achievements. No one should blame them for disobeying a city rule that they generally cannot afford to obey, but they should be expected to treat their neighborhoods with respect and care.

It often seems to be the case that college students leave homes and apartments worse than when they found them—but I invite them to reimagine their role in their immediate neighborhoods, to keep the streets clean, to extend generosity to their neighbors, and to partake in community improvement as if it were their permanent home.

This way, should anyone point the finger at college students for being the root problem in a flawed system, they can pull out another trick from childhood:

When an older sibling blames the younger one for spilling the milk, the latter diverts parental rage by immediately grabbing a paper towel and doing something to clean up the mess. Then maybe the parents will get the picture—that no one person is to blame.

It’s time to work together to clean up the mess.