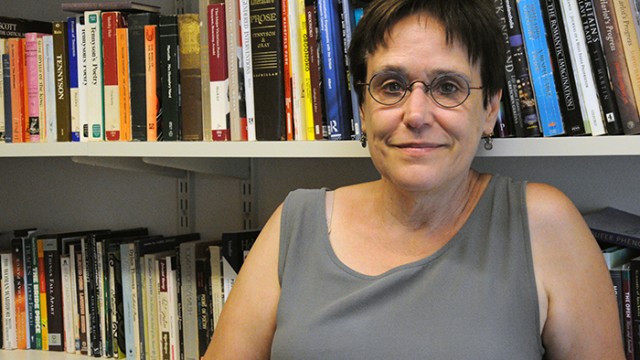 Within the Boston College English department, Victorian scholarly specialization is quite prevalent—after all, an entire section of full-time faculty is devoted to British 19th Century Studies on the BC website. While she also researches and instructs British literature and culture, Elizabeth Kowaleski Wallace, a professor within the department, instead focuses on and argues for the greater allure of the 18th century. “British writers during the 1700s are not nearly as uptight as the Victorians,” Kowaleski Wallace said.

Born and raised in Middletown, Conn.—home of both Wesleyan University and Middlesex Community College—Kowaleski Wallace could not escape the robust and engaging world of academia. Following high school, she attended Trinity College in Hartford for her undergraduate degree. Initially, however, she was reluctant to pursue English and even dabbled in drama and theater studies.

“I always thought I wouldn’t do English—it came too easily to me—but I kept getting pulled back into it … I enjoyed it too much,” Kowaleski Wallace said. Therefore, she double-majored in English and French—traveling to Paris for study abroad—and headed straight to Columbia University thereafter for her doctorate.

Kowaleski Wallace obtained her Ph.D. in 1981, having written her doctoral dissertation on the 19th century female writer. It was after authoring this paper, however, that she recognized her profound interest in the 1700s, rather than the 1800s. “I was figuring everything out, in terms of academic pursuits, and the 18th century—the Consumer Revolution—included such rich literature regarding gender, the body, and social space,” she said. Thus, Kowaleski Wallace became increasingly fascinated with and switched her focus to literature and culture of the 1700s, alongside feminist and cultural theory.

Kowaleski Wallace commented on how often, given the popularity of the Victorian era, people underestimate the significance of the century prior. “I have to persuade people about the 1700s,” she said. “Many consider it really dry, stoic, and unresponsive to women. But, I think that there is a very strong case to be made for the 18th century as the most important era for the literary canon.”

More specifically, she noted the accessible commentary that the 18th century contributes in terms of popular culture of the time. British It-Narratives of the mid- to late-1700s—a brand of prose fiction in which objects and animals assume the central role of narration—addressed issues of the age in the increasingly commercial society by storytelling through the circulation of day-to-day objects. Further, literary works of this century provide insight surrounding the British slave trade and public recollection of it—previously, society largely dispelled the activity as one of other nations, neglecting the prominent role England had also played during this period of great economic expansion. Kowaleski Wallace analyzes the slave trade’s representation in popular imagination in her book, The British Slave Trade and Public Memory, published in 2006.

“I have a really strong passion for pop culture,” Kowaleski Wallace said, “and scholarly understanding is coming to understand the 18th century as a more dynamic, vibrant era full of it.” She then went on to explain that more and more, the 1700s are attracting collegial scholars in light of this descant on British society that its literature presents.
An indication of her interest in popular culture and its manifestation in the arts, most recently, Kowaleski Wallace wrote on the representation of race in Mad Men. Additionally, she has published works on female writers and consumer culture of the 18th century, and she served as the editor-in-chief for the Encyclopedia of Feminist Literary Theory.

Currently, Kowaleski Wallace is working on a project surrounding women and things of the 18th century—an analysis of the objectification of females in the 18th century and the parallels between language used to describe women and vocabulary commonly associated with “things.”

Before coming to BC in 1993, Kowaleski Wallace taught at Brandeis University, Tufts University, and Simmons College. Given that she was already living and teaching in the greater Boston area, and after James Wallace, her husband—whom she met in grad school—became a professor within the English department at BC, Kowaleski Wallace, too, began to teach on the Heights.

Here, she instructs Studies in Poetry and Contemporary Literary and Cultural Theory, a graduate course on Post-structuralism, Marxism, narratology, New Historicism, and feminism. Additionally, she leads a dissertation workshop at MIT’s Graduate Consortium in Women’s Studies. Next semester, she will be offering a class on Jane Austen.

“I genuinely like BC the best,” Kowaleski Wallace said of the places she has taught. “The commitment to social justice is always there, and students are always willing to talk about their experiences, which moves me so much. The extraordinary sense of openness and curiosity at BC is phenomenal, and I have fabulous colleagues in this department.”

professor profile kowaleski wallace english department
The Hater’s Guide To BC Sports And Literally Surviving The School Year
Storm At City Hall: A Weekend Of Surprises At Boston Calling