Home » Shot Over 12 Years, ‘Boyhood’ Makes An Epic Of Growing Up 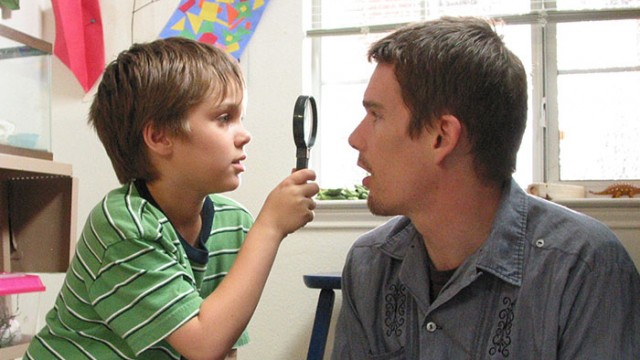 Shot Over 12 Years, ‘Boyhood’ Makes An Epic Of Growing Up

Richard Linklater’s Boyhood offers something of a paradox: a movie built on ordinary, everyday moments, which in its cumulative effect becomes an epic. The movie has garnered much praise for the sheer ambition of its making—filmed annually over the course of 12 years, Boyhood follows its protagonist as he ages from six to 18, growing up before our very eyes. The scope of the project is undeniably impressive, but the key to the film’s success lies in the way it remains constantly anchored in the moment, concerned with the everyday details of one boy’s life.

The place is Texas, and the boy is Mason Jr. (Ellar Coltrane), whom we first see as a wide-eyed 6-year-old, gazing at the sky to the tune of Coldplay’s “Yellow.” That is the first of many popular songs throughout Boyhood, songs that serve in part as fleeting pop culture anchors in a film where time moves inexorably forward. Coldplay gives way to Arcade Fire, just as Bush gives way to Obama and Mason’s adolescence gives way to adulthood.

Boyhood is enveloped in the pop culture milieu of the last decade in a way that will inevitably stir memories in its younger audience, who like Mason went to midnight releases of Harry Potter and enthused about The Dark Knight. But such references aren’t applied to the film extraneously, in a superficial attempt to capture a zeitgeist or provoke nostalgia. Instead, they emerge organically, as real details of Mason’s suburban Texan life.

Indeed, nearly everything about Boyhood feels lived-in. The movie is keenly attentive to the passage of time, and to the ways that life seems to move ahead without clear continuity. Friends from one year are gone the next, and Mason’s mother Olivia (a superb Patricia Arquette) cycles through several husbands, homes, and jobs in a quest for stability.

Mason Sr. (Ethan Hawke) drops in and out of the story, eventually evolving from a deadbeat dad to a more responsible presence in his son’s life. Linklater’s script doesn’t privilege obvious turning points or show-stopping dramatic moments, though. There is some compelling domestic drama in Boyhood—notably in the film’s harrowing middle section, when Olivia’s new husband reveals himself to be a violent drunk—but for the most part, the movie is content to traffic in the business of everyday life. Its sensitive attention to the minutia of ordinary lives makes its few lapses into contrived sentimentality—especially the coincidental return of a minor character toward the end of the film—seem all the more misplaced.

On a moment-to-moment basis, though, Boyhood is authentic to the core. Linklater has a gift for crafting lengthy dialogue scenes that feel naturalistic even though they are scripted and choreographed to the last word. He is more than matched by his cast, who are as comfortable expressing character through body language as through dialogue. Just look at the way that Hawke and Arquette play their first scene together, as Hawke tentatively tries to put on a show of familial unity for the kids, while Arquette keeps her distance and rebuffs him with a resentful glare. The parents’ relationship mellows believably over time, but the emotional scars of their divorce are written into their every movement and line reading.

The child actors are no less impressive. Coltrane has a subdued, thoughtful presence throughout. He doesn’t mug for the camera or demand to be liked—rather, he draws us in with his quiet, contemplative nature. Linklater likewise gets a believable performance out of his daughter Lorelei, who plays Mason’s sister, Sam. When these characters speak, they do so with the cadences and phrasing of real teenagers. They are sometimes eloquent, sometimes inane, and sometimes banal. But they are never less than real.

Boyhood feels so effortlessly natural that it risks overshadowing the work of its director. In a way, that is a fitting tribute to Linklater, who has clearly made Boyhood a movie to be felt first and analyzed second. Aside from some lengthy walk-and-talk tracking shots, the movie rarely draws attention to itself. But its style is not unsophisticated, and the intensity of feeling it conveys is a direct result of Linklater’s smart directorial choices. Many of these go unnoticed, like the fact that he shot the entire movie on 35mm film stock to maintain a consistent visual look, even as digital technology overtook the film industry over the course of the 12-year production.

Other choices are more evident, like the movie’s editing patterns, courtesy of longtime Linklater collaborator Sandra Adair. Rather than cuing the audience with date and title cards, the movie seamlessly elides easy distinctions between years. As the movie goes on, we know that the end must be approaching, but we never know quite how long we will spend in one period of Mason’s life, or where a year’s passage of time will find him. A lot of the movie’s power comes from that tension between inevitability and unpredictability, a tension that is at the heart of how life is lived and remembered.

By the time the credits roll, we have spent two hours and 45 minutes with Mason—a tiny fraction of any human life, but a long time in movie terms. Boyhood earns every minute of that run time. At the end of the film, as Mason goes off to college, his mother sobs that she wishes there was more. You may find yourself feeling that way, too—wanting to see more of Mason, and more movies as intelligent, compelling, and humane as this one.