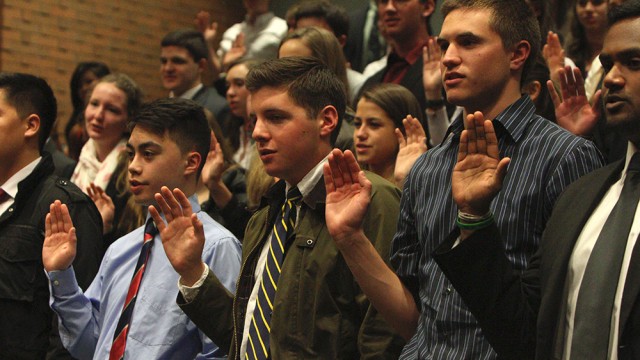 Boston College students seeking more control over and interaction with their campus have the option of communicating directly with UGBC’s Campus Voice website—an online idea-submission platform launched last spring. Although the website has been active since March, the Policy Development Committee within UGBC is working to draw more awareness to the website among students.

Campus Voice uses a voting system to determine which issues are most relevant to students. A student can post a suggestion for change on campus and other students can then vote for it up to three times. Once a suggestion reaches 50 votes, UGBC has pledged to make it a priority, said Matt Hugo, UGBC senator and A&S ’16.

“It’s a way for students to be able to have a say in the agenda setting process for UGBC,” he said. “After all, the government is there to represent their needs. It helps us figure out what their needs are, and based on the amount of votes that proposals get we can determine the amount of student support for different initiatives.”

The website began after the Policy Development Committee realized that it was very difficult to set an agenda without any direct input from the student body. The site had initially slow start, though, due to lack of publicity, Hugo noted.

“We had a little bit slower of a start than we would have liked to last year, but that’s directly related to the fact that we didn’t put as much effort into publicizing it as we probably should have had,” he said.

This year, Hugo, who serves as the chair of the committee, has set up meetings to implement the new publicity plan, which will include meeting with administrators to discuss the most voted-for suggestions. There will also be an upcoming video to explain the details of Campus Voice. The committee will also be speaking with club presidents and relying on social media and word-of-mouth.
Hugo said the committee plans to focus extensively on freshmen. In doing so, the committee will distribute shirts and pens, and organize bulletin boards for RAs to put in hallways.

“We’re going to focus mostly on freshmen because we do want it to be a long-lasting institution,” he said. “If we can appeal to the next generation of people, it will stick best.”

Campus Voice makes it easy for UGBC to prioritize initiatives because the voting system displays which suggestions students care most about. UGBC executive vice president Chris Marchese, A&S ’15, said Campus Voice is one of the best methods BC’s student government has as a means to gathering feedback from the student body.

“It’s easy to use and online, which means it isn’t burdensome like surveys,” Marchese said. “Moreover, it’s interactive and allows students to up-vote suggestions. This helps us prioritize initiatives. And lastly, we can comment and directly communicate with students about their ideas. Overall, I think Campus Voice will prove to be a great means for us to do work that is meaningful to students and affects their daily lives.”

Several of the initiatives suggested via Campus Voice have already been successfully completed, according to Hugo. For example, there were 86 votes to allow chicken fingers to be placed in wraps in the dining hall.

In a more financially impactful effort, UGBC has implemented a textbook-swap program through which students can exchange and sell textbooks for no additional fees. UGBC is also currently working to reorder the shuttle system to get a shuttle to the Chestnut Hill Mall—a suggestion that received 82 Campus Voice votes.

Although these initiatives were successful, putting Hillside Cafe back on the meal plan was not, despite the idea receiving 52 votes on Campus Voice.

“There are some things that are not feasible, unfortunately, but we will find out if it’s not feasible through meeting an administrator and putting actual effort in,” he said. “If it’s not possible I still want to try. I want to hear ‘no’ from an [administrator] before I say ‘no’ to a student.”

Once the publicity campaign for the website begins, Hugo estimates there will be about 10 suggestions each month. Certain suggestions will naturally gain traction as students vote for what they most care about and the responsible poster lobbies for votes. Although UGBC can technically veto suggestions and not make them a priority, Hugo plans to take all suggestions seriously, he said.

“I want it to be really the most direct way for someone to get into contact with UGBC,” he said. “I want this to continue to be the easiest way for people to make change on campus. We’re here to represent students and Campus Voice is just giving us the opportunity to know how to do it best.”