Home » Coakley, Baker Will Face Off In General Election 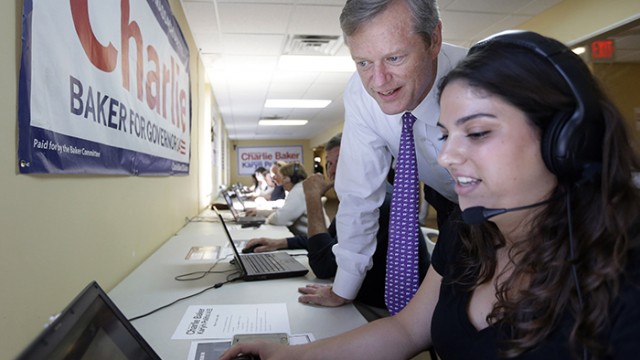 Coakley, Baker Will Face Off In General Election

The Massachusetts primary elections brought the last push from candidates vying for nominations from their respective parties—in positions ranging from state representative to governor. The votes from all 2,173 Massachusetts precincts have been tallied, and the results bring some surprises, including the upset of a nine-term congressman by an Iraq War veteran, but also some generally expected results, including the nominations of gubernatorial frontrunners, Democrat Martha Coakley and Republican Charlie Baker.

It will be a tough race between Coakley and Baker, as Coakley seeks to erase any doubts about her abilities after a disastrous 2010 Senate campaign. The slim margin of victory over Grossman will undoubtedly leave members of the Democratic Party and various activists and fundraisers questioning whether Coakley has what it takes to win the general election in November. Coakley is not only seeking redemption for her failed 2010 campaign but is also now one election away from being the first female governor of Massachusetts.

Coakley and Baker will now look to swing the votes of the independents and the moderate Democrats who are often the deciding factor in Massachusetts elections. Coakley will try to do this by building on her platform, which is centered on improving early-childhood education and equality for women within the workplace. Coakley also plans to use her failed senatorial attempt in 2010 as a stepping-stone into the governor’s seat.

“I’ve been weathered. I’m tough. I come back and fight again another day,” she said at her victory party at the Fairmont Copley Plaza, according to The Boston Globe. “I did that tonight, and I’m going to continue to stand up for people who need a voice here in Massachusetts.”

Baker, on the other hand, is branding himself as an independent who can broker a compromise between the GOP and the liberals in a state government that is dominated by Democrats. Hoping to appeal to urban Democrats, Baker said that he “wants to bring a new, independent brand of bipartisan leadership,” according to The Boston Globe.

Both Coakley and Baker will look to win the support of women in order to have any chance at winning in the general election. Coakley has the advantage of potentially being the first female governor of Massachusetts and has advertised herself as part of the reform of the male-dominated Beacon Hill. Baker will lean on his wife, Lauren, and his running partner, Karyn Polito, in order to avoid losing the female vote, which he lost by 24 points in his 2010 campaign against the current governor, Deval Patrick.

Although Coakley and Baker were both favored to win their primaries, there were plenty of surprises. In what was perhaps the biggest upset of the night, Democrat Seth Moulton surged past nine-term incumbent Democrat John Tierney in the sixth district primary for the House of Representatives, despite Tierney’s support from party insiders, including the state’s two senators. The Iraq War veteran found support from voters who were unhappy with the indecision of congressional leaders, especially in the case of the Department of Veteran Affairs.

The Democratic nominee race for the Attorney General provided another surprise result. A political novice, Maura Healey won a landslide victory over long-time party favorite Warren Tolman, who had received the support of labor leaders as well as Mayor Marty J. Walsh, WCAS ’09, and Patrick. In November, Healey will face the Republican nominee,  John Miller, who won an uncontested primary race.