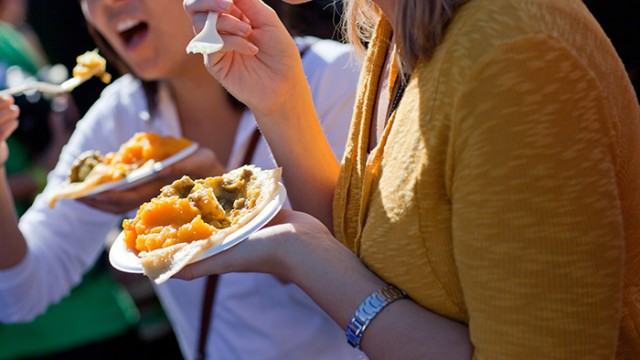 The picturesque Rose Kennedy Greenway will be covered by a green of a different sort this Sunday—“green” and locally sourced food. The Local Food Festival will feature produce and foods from primarily Boston, as well as the surrounding New England area. The Festival boasts the title of New England’s largest one-day farmers’ market and will take place from 11 a.m. to 5 p.m..

The Local Food Festival will feature myriad restaurants, over 100 vendors, and specialty food producers and farmers who use or grow New England produce. A chef demonstration stage will showcase the talents of a number of local chefs who will entertain their audiences and create meals that highlight seasonal and local ingredients. In addition, the festival hops on the DIY train with a “Do-It-Yourself” booth designed to instruct its visitors on how to make their own cheese or tortillas, and even how to get kids excited about vegetables. The Festival hopes to appeal to all ages with a Family Fun Zone and children’s activities.

The centrality of the Rose Kennedy Greenway makes the festival available to many residents throughout Boston and Massachusetts. The festival encourages its visitors to forego driving for alternative methods, such as walking, public transportation, and even biking.

“Choosing the Rose Kennedy Greenway was extremely intentional,” said Nicola Williams, president of the Williams Agency, an event planning organization. Besides its downtown location, the Greenway also boasts its own organically grown food. The Local Food Festival aims to celebrate the idea of healthy food and show how such foods can be accessible to everyone, regardless of their background or socioeconomic status.

Affordability is a particular concern for college students on a limited budget. Williams advises students interested in a cost-effective way to approach healthy eating to “eat seasonally, as it is more affordable and better for the environment as well”. With sample meals using local ingredients priced at $6 or less, “the food festival seeks to show people that local food can be affordable and that there are many reasonably priced options when eating seasonally,” Williams said.

The Local Food Festival brings awareness about local and sustainable businesses where people can purchase New England food, such as that day’s catch of seafood.

According to Williams, buying local food “helps the community’s economy thrive” by supporting the area’s farmers and businesses, creating more trading, and therefore on a local level, keeping money here.

By sourcing and eating locally, “we as a community put less stress on the environment,” since food has to travel a much shorter distance, Williams said.

“The exponential growth in the number of farmer’s markets in the area, even in winter, has created a diversity and vibrancy that is a local treasure,” Williams said.

Another main feature of the Local Food Festival is the launch of “A New England Food Vision,” said Williams.

“Food Solutions New England proposes changes in food production and distribution that will allow New England to supply half of its food needs by 2060,” she said.

The Massachusetts Sustainable Business Network, which puts on the Local Food Festival, is a shining example of environmental sustainability. It encourages the growth of a local, green and fair economy through sustainable businesses and practices.

The festival is a “zero waste event,” meaning it diverts over 91 percent of its waste each year and offsets 100 percent of its energy. The festival discourages the use of paper and encourages interactive activities, which minimize waste and an environmental impact and maximize learning.