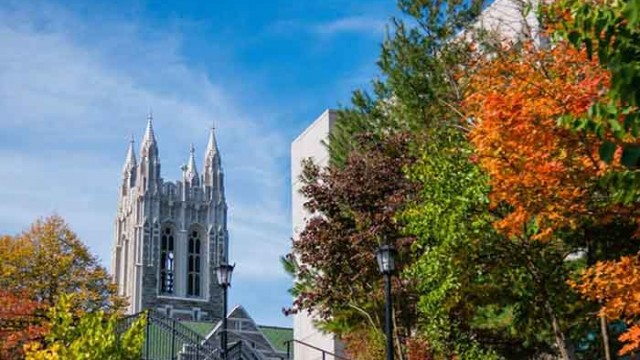 Boston College retained its place as the No. 31 university in the country, according to U.S. News & World Report’s annual listing of top national universities, released on Tuesday.

The news magazine once again ranked Princeton as its top national university, followed by Harvard, Yale, Columbia, and Stanford. Aside from Dartmouth College dropping from tied for 10th to 11th in the rankings, the entire top 10 on the best universities list remained the same from last year.

“It is heartening to see that Boston College has been recognized once again by U.S. News & World Report as one of the nation’s great universities,” Quigley told the Office of News and Public Affairs. “We are committed to providing a transformative education to those young men and women who chose to study at BC, and it is good to see our peers recognizing just how well we are doing.

“I congratulate our talented faculty and all members of the University community for their important contributions that have resulted in our maintaining our position in the top tier of national research universities.”

The two most heavily weighted measures are retention and undergraduate academic reputation, each factoring for 22.5 percent of an institution’s score. Retention includes both freshmen retention rate and six-year graduation rates, while the undergraduate academic reputation is measured through surveys of top administrators at peer institutions and high school college counselors.

Faculty resources are grouped into the next most important factor, weighing 20 percent of the score. This category includes class size, average faculty pay, student-faculty ratio, proportion of faculty who are full time, and the proportion of professors with the highest degrees in their field.

At BC, the student-faculty ratio is 13:1, while 51 percent of classes have fewer than 20 students and only seven percent have 50 or more students.

Ten percent of an institution’s score is based on financial resources, which embodies the average spending per student on “instruction, research, student services, and related educational expenditures,” according to U.S. News.

The final factors are graduation rate performance, which gauges the added value of a school’s policies and programs on its graduation rate, at 7.5 percent of the score, and the alumni giving rate at 5 percent.

In addition to its ranking on the list of national universities, BC was also recognized as the 37th best value school, which takes into account academic quality based on the university’s overall ranking and the net cost of attendance for a student who receives the average level of need-based financial aid.

For the 2013-14 academic year, 37.2 percent of BC students received grants based on financial need, and the average cost of attendance became $28,248 after receiving those grants.