Home » Winterbottom’s ‘Trip To Italy’ Is A Dull, Two-Hour Ride 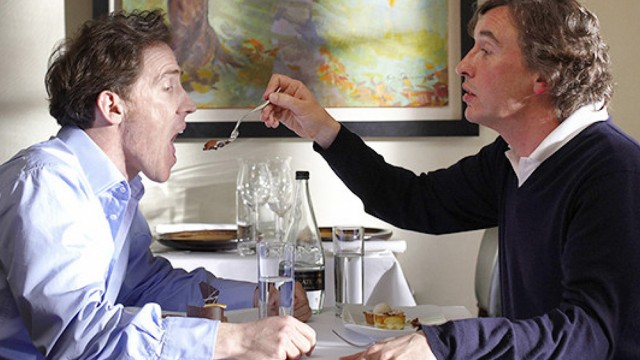 Winterbottom’s ‘Trip To Italy’ Is A Dull, Two-Hour Ride

The Trip to Italy is director Michael Winterbottom’s sequel to his largely extemporized comedy The Trip (2010). In the new film, Steve Coogan and Rob Brydon reunite on a gastronomical road trip through Italy’s premium restaurants to write an article for The Observer. Like its predecessor, The Trip to Italy relies heavily on the interplay between Coogan and Brydon (playing fictionalized versions of themselves) as they ramble on various topics, compete in a wide range of impersonations, and, naturally, exchange jabs. There is also a fair share of interpersonal ruminations as the two characters contemplate their careers, the difficulties of family life, and the inevitable affliction of aging and mortality.

Winterbottom’s cinematography is top-notch, as the camera lovingly gleams over beautiful Italian landscapes and cities as well as culinary masterpieces. While achieving the lavish setting of an ideal vacation, much of the imagery begins to wear thin about halfway through the movie. You can only view so many gorgeous Italian vistas and pastas before they start to amalgamate into a tiresome blur, especially on occasions when they are unnecessarily drawn out. It is possible that Winterbottom underestimated the limitations of film, as watching the character’s magnificent vacation soon becomes as fulfilling and awe-inspiring as browsing a tour guide pamphlet. Some of the smaller settings are well placed and are reflective of the movie’s core themes, but these are few and far between.

Much to their credit, Coogan and Brydon are an excellent pair with truly vibrant chemistry. They play off of each other well and offer a few hilarious moments while exercising their improvisation skills. Their competitive relationship often compels them (quite convincingly) to attempt to outdo each other in their craft. Winterbottom also does a superb job with editing, effectively using selective breaks that render Coogan and Brydon’s banter natural and flowing.

What is likely the biggest flaw of The Trip to Italy, however, is how painfully demanding it can be for a comedy. At times, it becomes a chore simply to fixate one’s full attention on the incessant garrulous ramblings. Aside from the myriad references that are rapidly catapulted in volleys at the audience (a fair portion relating to Romantic poets some audience members may never have even heard of—fans of Byron and Shelley will likely appreciate this film), many of the imitations hardly connect to anything. This results in many scenes that seemingly encompass impersonations for the sake of impersonations while being devoid of any actual jokes. Even when Coogan and Brydon’s mimicry is extremely impressive, it isn’t necessarily always funny. As for the impressions themselves, they range from absolutely spectacular to cringingly inaccurate (most lean toward the former). Coogan and Brydon’s impressions of Michael Caine in particular are absolutely hysterical.

Another issue with the comedic aspect of the film is that is can also become rather agonizing when some of the gags (like the scenery) are carried to the point of exhaustion and are then dragged onward. Nonetheless, there are a few genuinely side-splitting moments, such as when Brydon narrates a two-way conversation between an ancient petrified victim of the Pompeii eruption and himself. In addition, it is fairly interesting how the humor is utilized in many cases as the characters’ method of deflecting their midlife crises and mortality.

In terms of storytelling, The Trip to Italy is ineffective in creating any interesting character developments or conflicts. Coogan deals mainly with having just finished a TV series in Hollywood that is on an indefinite hiatus while trying to connect to his teenage son Joe (Timothy Leech). Brydon feels alienated and neglected by his wife, which is further complicated by his affair with an attractive deckhand (Rosie Fellner). The conflicts and introspection of the characters feel rather generic and hardly endearing. Coogan’s fleeting scenes with his son are simply uninteresting while Brydon’s struggles are difficult to become invested in. Nothing within this area is blatantly terrible so much as underwhelming and all too familiar.

For a more cultivated audience, this film may be a delight, but to the average viewer it can be a laborious two hours. In all likelihood, The Trip to Italy will either be tastefully entertaining or a tedious bore.

movie reviews The Trip to Italy comedy
A Year After Toronto Premiere, ‘Eleanor Rigby’ Reappears On Big Screen
The Wins Keep On Coming