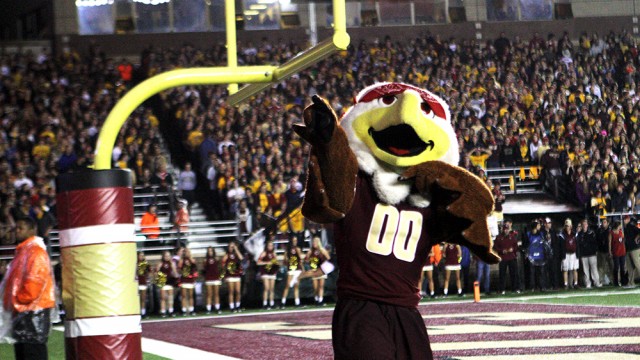 Victory: We woke up yesterday morning, and we were sure that we must have dreamt Saturday night. We asked our friends and started concluding that there was some drug in the air that we all inhaled that night, and we were all suffering from mass amnesia. We checked ESPN and just thought that we were still drunk. We couldn’t wrap our heads around the thought, nay the fact, that the Eagles had broken the Trojans Saturday night. It was incredible. It was unprecedented. It was glorious. The revelry that ensued was well earned.

Storming the Field: It is a rare thing that we get an opportunity to express our pure, unbridled enthusiasm in such a display of team unity and college spirit. As all swarmed onto the field from all angles, we became lost in that great mass of humanity. For that time, there was nothing but the sweet taste of victory on our lips.

Running: It’s really awesome that our quarterback can do this and do it well.

BC Offensive Line: They showed up and held their own on Saturday night. It was an impressive performance, really.

Fire and Ice: You think the two would be good together, but it turns out that it’s just a nightmare. That was a big mistake that we will never make again.

Printer Problems: Have you seen the lines in O’Neill for printers these days? We can’t imagine that there are more people waiting to get into heaven or a Louis C.K. show than there are trying to print in the 10 minutes before every class. The line is so long that it wraps around an enormous part of the stacks on the third floor and reminds us of the game “Snake” that we used to play on our parents’ old Motorola cell phones, only with obstacles spread out on the field.

Rolling the Mods: This is absurd. After what is arguably our biggest upset win since 1989, it is only right that we should have the opportunity to celebrate in the Mods. This business of coming through the Mods shutting things down right after the game ended was ridiculous. Let the boys celebrate!

NeoPets: This caused us a lot of trouble as a kid. We couldn’t figure out how to get neoPoints. On the other hand, one of our friends wrote code that broke the system. We thought it was pretty cool at the time, but now we wonder how we had all that time on our hands.