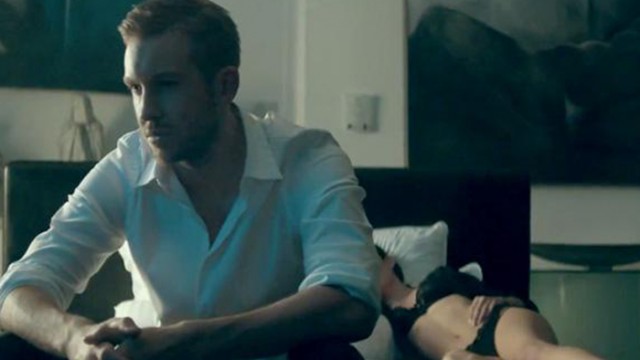 Like all Calvin Harris songs and videos, “Blame” starts off well. It seems to be building toward something. Harris’ rising, curious beat is the soundtrack to a pack of prancing ladies, waiting to enter what is probably the cleanest rave of their lives. The video cuts between shots of Harris and vocalist John Newman languishing next to despondent (hopefully sleeping) models. Newman asks these ladies to “Blame it on the night / Don’t blame it on me”—as if to say, the night is responsible for everything bad about to happen, and we just provide the soundtrack.

The beginning of Harris’ work is always the best. He builds up musical tension better than anybody, and director Emil Nava—who also directed Harris’ “Summer”—is no slouch at building visual tension in the cinematic department. Nava’s visuals are thrilling and majestic. This particular rave is seemingly populated by glamorous replicates of the same model, drawn to the scene by the rhythmic tune, as opposed to real raves, which are little more than a hollering bunch of painted teenagers. Like most of Harris’ videos, no one is having any fun, and none of it makes much sense.

The video climaxes as our lady friends dip into different pools of water, and then emerge together in some spring somewhere in a dark, misty forest. The obvious lesson here is that girls shouldn’t go to raves. They should go to dark forests instead … or, maybe a rave is a dark forest? Nava and Harris give us just enough to make out a hazy image of what might be the point of this video. It doesn’t make sense on first viewing, a little bit more on the second, and then a whole lot less on the third, at which point even Harris’ family and friends are likely to give up on it.