Train Falls Off The Tracks With ‘Bulletproof Picasso’

The title of Train’s newest album, Bulletproof Picasso, signifies the band’s long-running career—20 years and counting—and evidently, its inability to be shot down. Its relevance after all this time certainly says something about the quality of its music and its ever-growing fan base, but does it also hint that its sound might have to be compromised in order for it to stay on our radar?

With this new album, the band has set out to become more mainstream. Like Maroon 5, it has joined in on the trend of trying to make its sound more accessible by boarding the pop culture Train. (Ha.) Train has called its new album its best work yet, but I’m not so sure. Frankly, Bulletproof Picasso leaves one feeling nostalgic for some of Train’s past hits, like “Drops of Jupiter” and “Hey, Soul Sister.” Those insightful lyrics with their soft rock backdrop are what brought Train to fame in the first place.

The album kicks it off with a song called “Cadillac, Cadillac.” Now, if you didn’t already know this was Train, you wouldn’t have believed it. From the very beginning, the song has an unfamiliar sound—not unlike reggae—which seems random coming from the San Francisco rockers. This song definitely sets the tone for a common theme throughout the album—experimentation. Pat Monahan, the band’s lead singer and songwriter, seems to experiment with a variety of different styles—from jazz, to acoustic, to some folk, and then to rock, all the while continuing to put a heavy emphasis on pop.

“Bulletproof Picasso,” the next song and title track, brings back some familiarity with its lyrics. But once again, the beat is foreign to those familiar with Train’s body of work. With lyrics like “Say what you mean / Mean what you say to me,” this inspirational song seems like it would be the perfect culmination to a high school dance playlist. Overall, it’s not great.

Luckily, the next song gets better. “Angel in Blue Jeans” is a song most fans are familiar with by now. Released as a single this past June, it’s been taking the charts by storm, which is no surprise seeing as it sounds like the good old Train many know and love, but then with a more mainstream tempo. It’s a nice mix that still allows the band to do what it does best: storytelling. The music video, starring Danny Trejo and Hannah Simone, has made this story all the more tangible. “Son of a Prison Guard” further demonstrates this storytelling aspect that’s so uniquely Monahan. “There were architects and astronauts / But the only one she loved was a prison guard”—poetic and fun.

“I’m Drinkin’ Tonight” speaks to how the album is perceived as a whole. The lyrics are good, but the song is mediocre. Train’s typically unique and soulful lyrics—“I can’t take any more / I hope the poison’s a cure”—just sounds wrong in this new context. They don’t make sense with the beat. This attempt to gain popularity, to produce catchier songs, takes away from the quality of the lyrics, and this can be seen most clearly in this song.

However, the final song on the album, “Don’t Grow Up So Fast,” reminds fans why they fell in love with Train in the first place. The song’s lyrics, “You can’t drown in the water beyond your years / Just don’t grow up so fast,” are very reflective. So reflective, in fact, that you might just have an existential crisis while listening to it (where did the time go?!). Bravo! Way to bring the fans back, Train.

Overall, it seems as though Train is trying too hard to be relatable in the lyrics, and hence, the lyrics are lacking. The band has replaced poetry with a generality that can appeal to those who don’t know that it has done better. Bulletproof Picasso does have its moments, though, that keep listeners from stepping off the Train. Perhaps that’s why it’s been 20 years and counting. 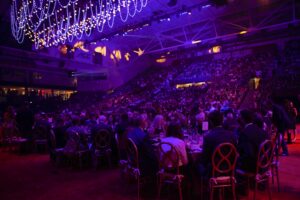