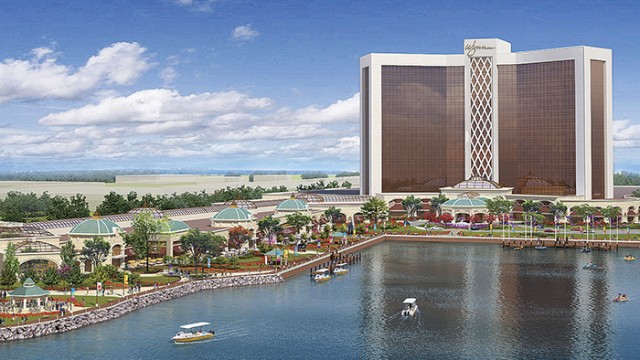 With Wynn Resorts Victory, Racing In Revere Takes A Hit

The state gaming commission on Tuesday approved the proposal in Everett for a $1.6 billion casino to be built north of Boston. It will be one of the largest private developments in Massachusetts state history.

The 3-1 vote awarded the eastern Massachusetts casino license to Wynn Resorts, owned by billionaire developer and resort tycoon Steve Wynn, over Mohegan Sun which intended to build at the Suffolk Downs racetrack in Revere.

Despite concern over the potential repeal of a 2011 state law authorizing three casinos in Massachusetts, the commissioners concluded hearings on Tuesday morning with only acting commission chairman James McHugh preferring the competing proposal by Mohegan Sun.

Though McHugh told The Boston Globe that “both applicants were terrifically qualified,” the commission leaned towards Wynn, believing it would create more jobs as well as stand up better to a competitive market. The casino giant agreed to all requirements that the commission set forth and on Wednesday, expressed the agreements formally both orally and in writing.

In addition to the 4,000 permanent and 3,700 construction jobs that “Wynn in Everett” hopes to bring to the area, a “Note from Steve Wynn” on the project’s website reads that the casino will compensate the city multiple millions of dollars each year through payments to cover the impact of increased real estate taxes as well as to reimburse the services affected by the casino, including police and firemen. Along with the $170 million that accounts for the accepted proposal’s estimated payroll, Wynn notes that the hiring process will provide first preference to Everett residents and their families.

“My company recognizes that our real success depends not only on how well we treat our employees and guests, but how fair we are with our neighbors, as well,” Wynn said in a note on a website dedicated to promoting the casino giant to Everett. “That’s why everyone worked hard to create a Host Community Agreement that will make a profound impact on Everett for generations to come.”

Though both Wynn executives and Everett Mayor Carlo DeMaria are excited about the project, reactions among the city’s residents are mixed. The possibility of increased job opportunities does not negate concerns about increased traffic and congestion in the area, which Everett citizens are already apprehensive about.

Despite the prospect of crowding, DeMaria told The Globe that the decision would bring success to Everett, changing what he termed a “desolate” part of the city

The proposal plans to use a 30-acre site on Mystic River to house its 500 hotel rooms, 3,242 slot machines, and 168 table games. The location, which used to be occupied by a chemical plant, will include a 365-foot glass, five-star hotel tower along with 77,250 square feet of retail space, as well as meeting and convention areas, food and drink options, and a large nightclub.

Though the competing proposal included many of the same amenities, in the wake of the commission’s decision executives from Mohegan Sun as well as Suffolk Downs have already made statements concerning the negative impact that the conclusion will bring to Revere.

“We will be meeting with employees and horsemen over the next several days to talk about how we wind down racing operations as a 79-year legacy of Thoroughbred racing in Massachusetts will be coming to an end,” said the Suffolk Downs Chief Operating Officer Chip Tuttle to The Globe. He also said that the decision would result in “unemployment and uncertainty for many hard-working people.”

Though the disappointed Mohegan Tribal Gaming Authority is out of the running, the gambling commission has one more casino license to award for the state of Massachusetts. According to the commission’s timeline, the license for the third region, which accounts for southern Massachusetts, will be determined in August of 2015.