Home » CNN Hosts U.S. Premier of ‘Whitey’ Documentary at BC 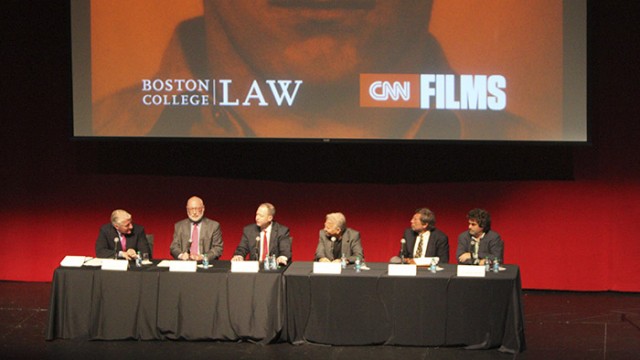 CNN Hosts U.S. Premier of ‘Whitey’ Documentary at BC

About 30 years ago, Rakes and his wife, Julie, had just completed a long-envisioned goal of owning their own liquor store. In a candid interview for the documentary, Rakes emotionally recalled that shortly after opening the shop, Bulger showed up at Rakes’ home, knife in hand, along with two of his henchmen demanding that Rakes immediately forfeit ownership of the store for $67,000 in cash, compared to the $100,000 the Rakes family had invested in it. After an initial refusal, Bulger and the two men threatened the lives of Rakes and his two daughters, claiming, “It’d be a shame to see them grow up without a father.” Rakes relinquished ownership of the liquor mart, and, like many others, would live in fear of Bulger for decades to come.

The documentary weaves together interviews with lawyers, ex-gang members, and victims’ families, police surveillance footage, and media coverage of Bulger’s 2013 racketeering trial—the case that would later seal Bulger’s future behind federal bars per a double life sentence plus five years.

Focusing not only on Bulger and the particular heinousness of his crimes, but also on whether the famed South Boston criminal was an FBI informant, the documentary deeply analyzes whether the FBI covered up his crimes for decades in exchange for Bulger’s services as an informant.

“Why was he allowed to run amok for so many years? Because of corruption,” Kelly said. “He corrupted numerous agents over the years, and it was a toxic stew of his criminality, and the agents who began at first hailing him as an informant—became infatuated with him—he started paying them off, and that’s why [Bulger’s crimes] went on for so long.”

During the panel discussion, the prominent criminal defense attorney, Carney, and the federal prosecutor who spent years seeking justice against Bulger, Kelly, were seated directly next to each other.
“Well, I don’t know the exact facts, because I wasn’t there,” Carney said in response to King’s question on how Bulger was able to operate for years without so much as accruing a parking ticket. “But neither was Brian Kelly.”

“So, what I do is look at the evidence. I start with my client, who was adamant from day one that throughout his career he had never been an informant, and people corroborated that,” Carney said.
The panel lasted about 40 minutes, primarily containing debate on the depth of the FBI’s involvement throughout Bulger’s career, and uncovering the truth in pursuit of justice for the families of dozens murdered by Bulger and his gang.

“I made this film largely for the victims’ families, who have been mistreated by this process. A., in losing their loved ones, and B., later on in civil litigation where they were basically screwed, I think. … What’s the justification for letting a killer on the streets?”

The U.S. premier of the documentary will air tonight on CNN at 9 p.m. Eastern time. Additional content containing footage from Tuesday’s panel event will also be featured on CNN’s website.