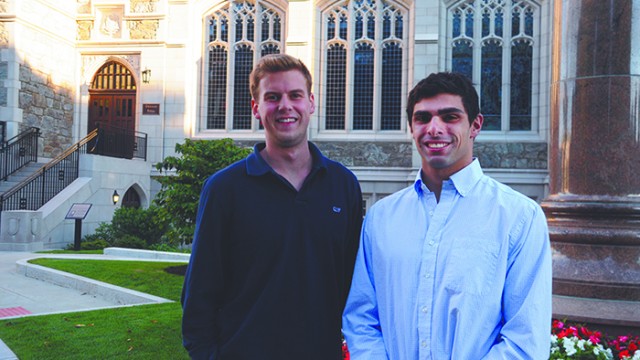 A startup created by a Boston College senior that allows high school students to showcase their extracurricular talents to college admissions officers released a beta version of its website over the summer.

Inspired to make the application process easier for prospective college students, Michael Bryant, CSOM ’15, hatched an idea for an online platform that would bring together students, colleges, and admissions officers. Out of that was born Nxtfour.com—an online platform that aims to revolutionize the college admission process by making it easier for high school students to connect with colleges of their choice.

“Back when I was a senior in high school, I was under a lot of stress, and application deadlines were quickly approaching, and I still had tons of questions,” Bryant said. “So, I was thinking, given all the networking capabilities we have today, why isn’t there something for high school students when they’re applying to college that brings together counselors, colleges, and students to facilitate the whole process.

“Nxtfour is an online platform where high school students can create a multidimensional resume consisting of pictures, videos, audio, where they can connect with other students and showcase their talents and achievements to colleges,” Bryant said.

Along with four other students—two other BC students and two from Harvard—Bryant pitched the idea at the BC Venture Competition’s annual Elevator Pitch Competition last fall, and won first place. The team then entered BCVC’s main competition in the spring.

The main competition required competitors to submit a business plan and pitch their idea to a panel of judges consisting of venture capitalists, entrepreneurs, and executives. Bryant and his team took first place and were awarded $20,000 in April.

After winning, the team members went their separate ways, leaving Bryant with an idea, a viable business plan, and some money to spend.

Bryant recruited Jackson Evans, his freshman roommate and A&S ’15, and Jeff Parsons, A&S ’15, to join him at the accelerator program Soaring Startup Circle (SSC) over the summer. SSC, based in Boston, was started by a group of BC alums, including Tom Coburn, CEO of Jebbit, who left BC in Feb. 2013 to pursue the company full-time; and Dave McLaughlin, founder and CEO of Vsnap and BC ’96.

Through an application process, SSC selected Nxtfour to be part of its summer program, which provided Bryant, Evans, and Parsons with office space, legal advice, and a gave them access to a network of investors.

It was at SSC that the startup team met Patrick O’Quinn, who now provides Nxtfour with legal expertise, and Michael Petronaci, who just joined the company as its chief technology officer. He will develop and maintain the site as it grows and expands.

Nxtfour.com, the initial version of which was released on July 5, is similar to Facebook and LinkedIn, but it’s marketed as a professional, social, and educational network for high school students.

On the site, visitors can create a profile similar to any other social network. Users add their interests, the high school they attend, and a short bio. The most integral feature of the profile is a collage page where users can post videos, photos, audios, and written posts. The goal is for students to showcase parts of their extracurricular life that they can’t include in traditional college applications by including a link to their Nxtfour profile on their applications.

Because the site is in the beta stage—which is essentially a test phase, where the company can gather feedback to improve in areas where users suggest—there are a little over 100 users right now, most of who are test users.

Similar to how Facebook works, once a user creates a profile he or she can search other users by their name, school, or interests, and visit their page.

Users post things like photos of service trips, videos or audio of their instrumental concerts, and blog posts about topics they’re interested in. Evans said Nxtfour will aim to develop a news feed for information related to college admissions. The team also hopes to see the platform become a social arena for high school students, a place where they can “connect” with other students applying to similar colleges, message admissions officers, and interact with the colleges they wish to attend.

Parsons said Nxtfour hopes to secure $250,000 to $500,000 in seed funding in the next nine months to support improvements in the site and to start publicizing the platform. The team is currently relying on high school and college students to market the site to their peers, but Bryant said it is actively searching for new interns.

Nxtfour has been introduced to and received well by a limited number of high schools along the east coast, but once funding increases Parsons said the company plans to expand its reach.

startups
Center For Teaching Excellence To Offer Educational Practices Reform For BC Faculty
CNN Hosts U.S. Premier of ‘Whitey’ Documentary at BC