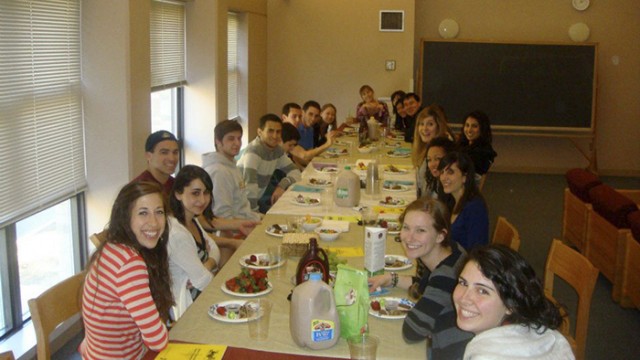 Boston College Hillel is BC’s only Jewish religious club on campus. One of BC Hillel’s main missions is “serving the social, cultural, and religious needs of Jewish students and enriching the campus culture for all,” said Amanda Haltmaier, BC Hillel secretary and A&S ’15.

One activity that BC Hillel is most renowned for is its weekly student-cooked Shabbat (the Jewish Holy Day of rest) dinners every Friday at 6 p.m. in the Gabelli second-floor lounge, which all students, Jewish and non-Jewish, are welcome to attend.
“We have a couple hundred members, our board is around 15 people, and weekly attendance is usually around 50 people for our Shabbat dinners,” Haltmaier said.

This year, BC Hillel has four or five international Jewish exchange students from various countries that attend its events. The club takes informal attendance at each dinner, so students don’t have to sign up beforehand and do not have to have any previous affiliation with the group to attend.

BC Hillel also helps its Jewish students get in touch with local temples if they are interested, but this is not required. “We help link our Jewish students with temples in the surrounding area nearby if they’re interested in going to more services than BC has to offer,” said Mollie Solon, co-president and CSOM ’15.

Other events that BC Hillel hosts include religious services during Jewish holidays in the Multi-Faith Chapel near 66 Comm. Ave.; a yearly Hanukkah party featuring specialty foods such as Latke potato pancakes and Dreidels in December; a large Passover religious service and catered event; and special freshman outreach programing and Shabbat events. They also host “Schmooze with the Jews” meet-and-greet meetings with Jewish faculty and members of BC Hillel, and they organize social and religious events with Hillel clubs at other Boston-area universities such as BU and MIT.

Last year, BC Hillel hosted a meditation and religious service alongside the BC Buddhism Club. “We work to plan events and do things with other faith clubs on campus at BC, such as the Buddhist club, and have plans to keep doing similar things with other religious cultural clubs this year,” Haltmaier said.

The club’s leadership emphasizes that being Jewish is not a requirement for attending any events put on by BC Hillel. “The majority of the people who come to our weekly Shabbat dinners are actually not Jewish, but are interested in getting to know the Jewish community and learning more about what it means to be Jewish and our culture,” Salon said. “For our High Holy Day religious services, such as Yom Kippur and Rosh Hashanah, mainly only Jewish students come to those events in the Multi-Faith Chapel behind 66.”

“It’s not about establishing and defining a Jewish community,” Haltmaier added. “We’re more about enriching the cultural environment of BC as a whole.”

One upcoming event hosted by BC Hillel is for the Jewish holiday Sukkot, which will take place from Oct. 8 to 15. Sukkot is a Jewish holiday in remembrance of times in ancient Israel when Jews would build huts—called sukkahs—for use as temporary shelter during the harvest season. BC Hillel will assemble its own sukkah on Stokes lawn during the Sukkot holiday and will host an event inside of the structure called “Pizza in the Hut” on Wednesday, Oct. 8.

This year, BC Hillel is looking to expand awareness about the organization. “One of our goals includes increasing our presence on campus,” Haltmaier said. “A lot of people don’t know what Hillel is, and we want to work to change that. We are always looking to add new members, and we are always happy to have more people take an active role in Hillel. Students who are interested can just show up to any of our events—we have a sign-in sheet at each event where they can write down their email addresses to stay up to date on our activities.”

Members of BC Hillel have formed a community and have found their own niche within a predominantly Jesuit Catholic university. “All of my [non-Jewish] friends are really supportive and interested in my faith, and they all make a huge effort to attend my events, and they have come to our Passover event every year, which I really appreciate,” Haltmaier said. “What better way to show loving your neighbor than being accepting and curious about other faiths?”