Home » Relationships, Not Classes Or Clubs, Are What Define A College Experience 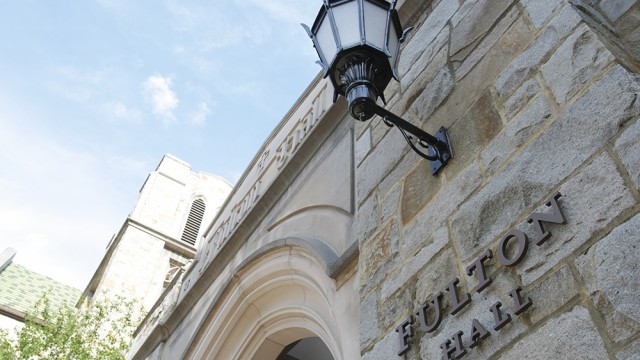 Relationships, Not Classes Or Clubs, Are What Define A College Experience

In the small conference rooms in Fulton where I often seek solace and no one expects me to wear shoes, a question struck me the other day: What have I really learned in college?

Economics? I hope I can say I understand something about my major now. Philosophy? I can sling around heavily paraphrased Aristotle quotes with the best of them. But I will admit that, by this point, some concepts from Intro to Micro are hazy, and I’m probably actually quoting Plato 50 percent of the time I think I’m discussing Aristotle.

I attended a great conference last year in which the keynote speaker’s refrain was “people make people successful.” At the time, that phrase didn’t strike me as profoundly as it does now. I believe that people not only make people successful, but also fulfilled. If I have to boil down my collegiate experience into one lesson, I can pick this one out with surprising ease and clarity.

Don’t fall into the trap of thinking the library has all of the answers. When I first entered Boston College, I thought that if I just locked myself in Bapst and memorized entire textbooks that I would outwork others and be academically successful, and that in the times I released myself from academic captivity I would join a million clubs, become everyone’s friend, and find social success—how silly freshmen can be.

There will come a time when you may want to write a thesis, and you will need to have good relationships with professors in order to find a willing advisor. There will come a time when you want to apply for that Fulbright, or to grad school, and an advisor or letter of recommendation will make all the difference. When you want to score that sweet summer internship, don’t think applying to something on Eaglelink will actually get the job done—you better have your network together. Simply taking classes by crushing textbooks and acing tests isn’t good enough.

Building relationships isn’t all about the favors you can ask, however. More importantly, there are incredibly smart professors here to learn from—not getting to know them beyond their lectures is a shame. Students can learn much more from office hours than they can from the classroom. Intellectual fulfillment doesn’t come from a textbook, but it can come from a great conversation. Most professors are trying to cram as much material as they can into the short number of class hours they are given. They don’t have time to share the awesome insights they have that don’t directly relate to the course material. Some of the best conversations I have had with professors have actually revolved around subjects far from the professor’s field. Part of the beauty of attending a school where most people buy into the liberal arts philosophy of education is that it is possible to have a great conversation about philosophy with an economics professor, and open your mind up to connections previously unseen. Someone who has dedicated his or her life to amassing knowledge naturally has a lot of amazing insights to discuss, but very few of them fit neatly into the syllabus that needs to be covered.

In planning to take over every club at BC, make sure to stop and ask yourself if you are actually happy. Finding social fulfillment isn’t about having an iCal where all the colors of your appointments bleed together endlessly in a rainbow of sadness, but rather developing real relationships with people. If you are constantly running from meeting to meeting and don’t have time to actually talk to anyone, will you really end up with more than just a large number of acquaintances? Social stress should be making sure to write down all of the stupid things your friend did in college to embarrass him at a wedding toast years later, not a beeping phone that dictates your overcommitted life. College is one of the few times in life when you are given enough free time to get to know your fellow students incredibly well over four years. This is a gift meant to give you life-long relationships with people smart enough to attend BC. Someday down the road when you need advice making a critical life decision and need someone to call, your college friends will give you good advice, while your time as president of the underwater basket weaving club probably won’t provide any answers.

From the short experiences I have had in the “real” world over summer internships, the same thinking absolutely applies. Putting your head down and becoming a spreadsheet master doesn’t do any good when promotions come around if your boss doesn’t know your name. Social skills are incredibly important even in just landing a job or internship. A student with a 3.5 GPA who has put in the effort to call everyone in the office and has made a good impression will get an interview over a student with a 4.0 who hasn’t taken the time to speak with anyone any day. I wish I had learned this sooner.

I believe that we are fundamentally social creatures. Most people would agree that in terms of social fulfillment, building strong relationships is needed. If I’ve learning anything at BC, it is that this nature has a crucial impact on academic and professional settings as well. It’s amazing how little a 4.0 will get you if you have no one to vouch for you and have missed out on life-changing conversations. Modern society places so much emphasis on GPAs and SATs as if they are the key to success. If you look back on your college experience and your proudest achievement is your MCAT score, then I think you’ve missed the point entirely.

ONE COMMENT ON THIS POST To “Relationships, Not Classes Or Clubs, Are What Define A College Experience”