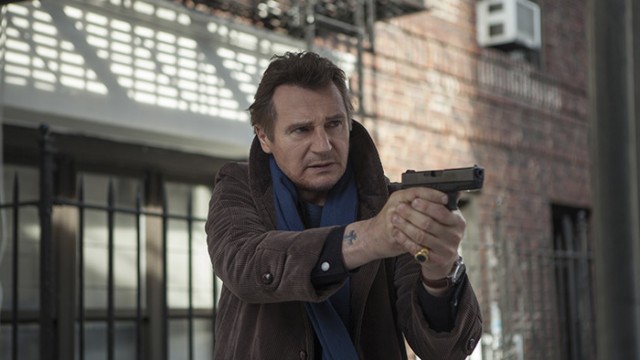 Not Quite ‘Taken’ By Liam Neeson’s ‘Walk Among The Tombstones’

At this point in his career, Liam Neeson is practically a genre unto himself. Since the runaway success of Taken in 2008, the 62-year-old Irishman has reinvented himself as an unlikely action star, regularly appearing on our screens to take on Albanian kidnappers, Alaskan wolves, or airline hijackers. Some of these movies (like Taken and its sequel) are pretty standard-issue shoot-em-ups. Others (like 2011’s stark, existential wilderness drama The Grey) aim to do something a little more ambitious. But they are all anchored by a familiar Neeson persona: the world-weary, hardened hero, quiet and good-natured on the exterior but ready to beat you down with righteous anger at the slightest provocation.

To be fair, that description could apply to a number of action stars, but Neeson brings something unique to his roles, a kind of weighty gravitas that can elevate even the silliest material by his mere presence. Neeson’s latest thriller, A Walk Among the Tombstones, is a somber affair that tries to tap into the brooding melancholy that is at the heart of his appeal. At the same time, though, it seeks to satisfy audience cravings for a violent, Taken-style revenge flick. The film that emerges is thus something of a compromised product—in part an old-fashioned, character-driven detective story, and in part a movie that lives in the shadow of Taken.

Neeson plays Matt Scudder, an alcoholic former cop now working in New York as an unlicensed private detective. Haunted by a job gone horribly wrong eight years ago, Scudder now takes on investigative odd jobs, largely for people who don’t want to involve the police. One such client is Kenny Kristo (Dan Stevens), a big-time drug trafficker whose wife was kidnapped and murdered, even after he paid the ransom. Scudder’s pursuit of her killers leads him to the trail of two serial killers, with a long history of kidnapping, torturing, and murdering women.

Credit where credit is due: for much of its runtime, A Walk Among the Tombstones sets itself apart with its patient pacing and moody tone. This is not a frenetic action film, but instead a more measured affair, driven by the subtleties of Neeson’s performance and the grey, wintry cinematography of Mihai Malaimaire, Jr. Director Scott Frank, who adapted the film from Lawrence Block’s novel, gives A Walk Among the Tombstones a deliberately anachronistic feel—not only is the movie set in 1999, which allows for plenty of Y2K references, it hearkens back to classic detective dramas of the 1970s.

Still, at some point A Walk Among the Tombstones morphs into a different kind of movie. Perhaps it is when the film starts following the serial killers, two utterly evil and thoroughly uninteresting sociopaths who provide just the kind of guilt-free revenge targets that populate the Taken movies. Or perhaps it is when we realize that women in this movie—just as in Taken—exist solely to be subjected, tortured, and killed, helpless victims who can only hope to be rescued. Or perhaps it is the film’s tired final scenes—a graveyard shootout and bloody, dark basement fight—which remind us that we have seen this all before, and which finally push A Walk Among the Tombstones definitively into the realm of cliche.

One senses that Frank and Neeson were striving for more than that. The movie occasionally employs self-conscious artsy touches, as when it overlays a voiceover from Scudder’s AA meeting with the climactic shootout, attempting to connect the mystery’s resolution with Scudder’s personal redemption. Another prominent subplot involves Scudder’s mentoring of a homeless black teen named TJ (Brian “Astro” Bradley). This provides some good character fodder, but also feels rather forced—a screenwriter’s imposition that is disconnected from the main story and designed to make us feel good about our hero for shepherding a lost youth.

A Walk Among the Tombstones consistently makes gestures toward being a serious and interesting movie. With talents like Neeson and Frank onboard, it periodically convinces you that it is indeed that. But the attempt doesn’t quite come off, and in the end, formula wins out, leaving the movie as little more than a darker, grislier update of Taken.