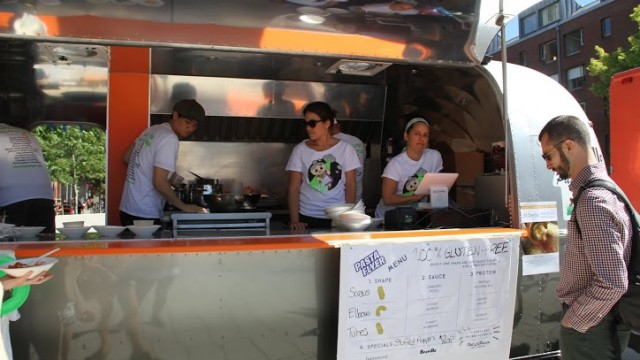 Since Friday afternoon, a large silver vehicle has sat outside Harvard’s Science Center, serving students and locals alike its gluten-free pasta fare. Pasta Flyer is the passion project of Mark Ladner, the executive chef at Mario Batali’s Italian eatery, Del Posto, located in the meatpacking district of New York City. At Del Posto, Ladner has made quite a name for himself in gluten-free circles. Along with its prestigious Michelin-star rating, Del Posto features a gluten-free option as an alternative for each one of its 10 pasta dishes.

Backed by a Kickstarter campaign, Pasta Flyer is Ladner’s response to an ever-growing demand for more accessible gluten-free dining options. While not gluten-free himself, Ladner recognizes the shifting focus toward this trend, and has made it his mission to create a “much more cooperative experience with gluten-free dining,” he said. “The primary challenge of Del Posto right now is dietary restrictions,” according to Ladner, which have mostly surfaced during the past five years.

At his lecture on Monday night as part of Harvard’s Science and Cooking Lecture Series, Ladner spoke on the advantages and disadvantages of making pasta from materials without gluten. For instance, it takes the combination of seven or eight different ingredients to achieve the same binding effect of gluten. On the other hand, Ladner stated that, unlike pasta that contains gluten, gluten-free pasta can be successfully cooked in microwaves.

Utilizing Kickstarter and hopping on the gluten-free train are only a few ways in which Ladner appeals to the younger generation. Wearing trendy glasses and a signature Del Posto baseball cap, Ladner has a laid-back sort of swagger that could convince any one of the students in his audience to enter the food service industry. He also made a few blunt comments atypical of industry representatives, even telling the audience that some of Del Posto’s gluten free offerings are less than stellar—he added, though, that he finds solace in the fact that if people can’t eat gluten, they don’t know what they’re missing.

Ladner insisted that gluten-free dining isn’t simply a trend. “I think 30 percent of gluten-free is a fad,” he said. He blamed the quality of American wheat on the ever-growing dietary intolerance of gluten, and believes that the future of food lies in treating indigenous grains and grasses responsibly. He also noted the need for fresher milling practices, as many American grocery stores are selling flour that is too old for consumption and filled with preservatives to make it last. “Europe would never use a lot of the things we call food here,” he said. “There isn’t enough focus on the importance of safe food [in the U.S.].”

Ladner is able to achieve this focus through Del Posto. In terms of its welcoming nature toward gluten-free, Ladner cited his motto: “Adapt or die.”

“I think more people are paying attention to it, so it’s whatever the public demands,” he said. “At Del Posto, we take all types of dietary restrictions with the same seriousness.”

As gluten-free options become more and more popular with the growing influence of social media, Ladner noted, people can voice criticisms to a much larger audience—since the traditional press is less critical, this supplementary form of critique raises the bar. He also stated that with so many mediums for diners to express their criticisms, “you can’t slip.”

It makes sense that Ladner chose Harvard as one of the sights for his Pasta Flyer college tour—he started his career making pizza at a restaurant in Harvard Square. When asked about the current state of Boston’s food scene, Ladner was positive.

“I love the food scene here,” he said. “Alden and Harlow is great. I recently went to Rialto in the Charles Hotel, which just celebrated its 20th anniversary.”

Pasta Flyer will be on Harvard’s campus until Wednesday night, and then will head to Johnson and Wales University in Rhode Island, as well as Drexel next month. While the flyer mainly focuses on being gluten-free, its menu items also avoid fish, shellfish, seafood, and nuts. On its website, the flyer describes the quick-service fare as a “pasta bowl that marries traditional Italian culture with Japanese ramen efficiency.”

Customers at Pasta Flyer have the option of three different types of noodles, sauces like “garlicky pesto” or tomato marinara, and creative toppings such as a truffled poached egg or gluten-free meatballs. And while the flyer may have an issue with maintaining the heat of the pasta—all three servings tested were a little cold—the effort is unparalleled.

Sitting with Ladner one-on-one is no different than hearing him speak in front of hundreds of people; he seems genuinely passionate about his craft, spending as much time talking to professors and the event organizers as he did to students and parents. It seems, furthermore, that his work is deeply personal—he even brought his mother and a large number of his Del Posto staff to come hear him speak.

Featured Image by Grace Godvin / For the Heights

food harvard university
Not Quite ‘Taken’ By Liam Neeson’s ‘Walk Among The Tombstones’
Rediscovering Chris Herren: The Star BC Lost And The Kid It Forgot