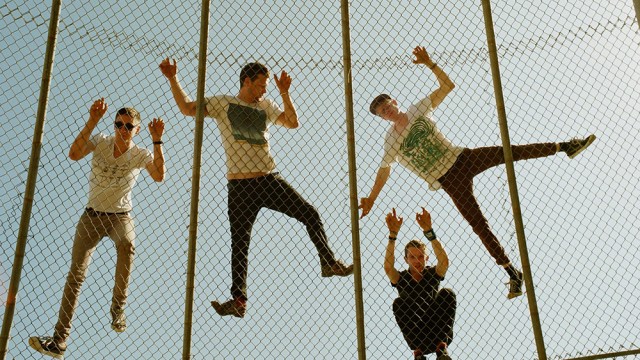 With such a wide range of indie bands currently hitting the charts, there is quite the disarray in sounds coming from the genre. To set themselves apart, many of these alternative artists take on a more experimental sound. Some don’t succeed. Over the last three years, however, Alt-J (also known as ∆) has skyrocketed into popularity. The experimental indie band from England has become one of the most well-known alternative groups not only the United Kingdom, but in the United States as well.

The band’s recently released album This Is All Yours takes many risks, and the payoff is impressive. The album features a darker array of songs, written in minor key, with a heavy mix of sounds. Deviating at times from the band’s usual airy, electronic sound, Alt-J has shown its versatility in This Is All Yours. Often applying tribal rhythms, the record switches smoothly from electric instrumentals to pianos, demonstrating an understanding of many different instrumental platforms.

Following the precedent of Alt-J’s first album An Awesome Wave, this record also begins with an “Intro” track, setting the mood for the project to follow. There’s a noticeable musical narrative running through the record—“Arrival in Nara,” “Nara,” and “Leaving Nara” are all predominantly instrumental pieces. The three songs tell a story, with “Nara” having barely audible words, and a lighter feeling to it, “Arrival in Nara” having a somber and more dramatic instrumental, and finally “Leaving Nara” leaving us off in a mood of redemption.

Another thread running through the album is that few lyrics are included. Alt-J will throw some words into its songs, but it’s mostly just to make quick references. This is evident in tracks like “Bloodflood Pt. II”—which is considerably darker than “Bloodflood,” its predecessor. There is a reference made to the movie Aliens in the song “The Gospel of John Hurt.” Although a good tribute to the movie, it doesn’t quite seem to fit in with the other pieces of the album, which stick with themes of love and loss.

“Hunger of the Pine”—a more electronica-based song—randomly throws in Miley Cyrus’ vocals halfway through the song. It seems to lose its purpose and become a typical pop song, squandering Alt-J’s talent.

Tracks like “Garden of England” and “Let Hand Free” don’t really fit into the album. The former features a more traditional folk song tune, and the latter, more of a commercial sound. These are the big letdowns of the album—they try to show how the band can have more than one sound, but seem to just hurt the project.

The rest of the songs feel closer together in concept. They all seem to link back to the title of the album, which basically suggests the listener is free to make what he or she will of it all. This last block of tracks links back to the idea of the love and loss. Here, songs such as “Pusher” and “Warm Foothills” take on a lighter tone.

Reflecting back on This is All Yours, the album seems to fit together, even with its faults. It was clearly hard for Alt-J to resist the temptation of becoming more “pop,” but the English band seems to have generally pulled it off well. This Is All Yours shows off a wide array of instruments, and it mostly keeps with the same themes throughout the album. Vocally—considering how few words are spoken—Alt-J is able to shine. Hopefully in the band’s next album, it can keep even more closely to its own style. The album’s title might suggests this album is “all yours,” but really, Alt-J could’ve made it more its own.

indie alt-j
This Weekend In Arts: ArtWeek Boston, Pops On The Heights, And More
Imagining Life As A Picture Book