Home » BC Ignites: Breaking Down The Stigma Surrounding Mental Health 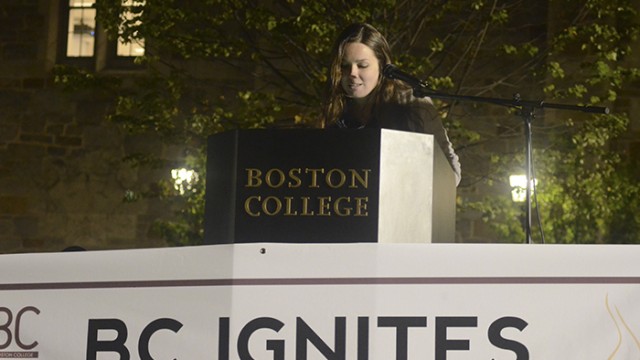 BC Ignites: Breaking Down The Stigma Surrounding Mental Health

Last night at this semester’s installment of BC Ignites, students gathered on O’Neill Plaza to listen to talks about mental illness as part of a growing campus initiative to catalyze conversations about mental health at Boston College.

This year, the Undergraduate Government of Boston College (UGBC) has enacted a Be Conscious campaign to help erase the stigma surrounding mental illness. Part of this campaign was Wednesday night’s BC Ignites. Ignites is a public forum series wherein a keynote speaker and students share their perspectives on an issue. The theme of this semester’s event was mental illness. In addition to Ignites, UGBC recently launched the Mental Health Initiative blog, which takes contributions from BC students regarding their experiences with mental illness.

The current UGBC administration is dedicated to removing the stigma surrounding mental illness on campus. When Nanci Fiore-Chettiar, UGBC president and Chris Marchese, UGBC vice president, both A&S ’15 ran for their positions this past year, they emphasized mental health as part of their platform.

“We thought Ignites would really start the conversation and that would motivate a lot of students to share more stories with us for our blog,” he said.

The website provides a way for students who may be struggling to access information easily. It was launched over the summer, when the Be Conscious team began building content and talking with administrators. UGBC has partnered with The Gavel to reproduce its Authentic Eagles series on the blog. The series is written by students and focuses on problems students have that are not obvious to everyone. It can be difficult for students to come to UGBC, so this blog is a way for UGBC to come to the students, Marchese said.

“What we really like about the Authentic Eagles pieces is that when you are reading them, you are like, ‘I could’ve written this, this could’ve been me’,” he said. “We wanted students to have a resource where they feel like they are not alone.”

In addition to the Authentic Eagles series, pieces on the blog will range from mental health, mental wellbeing, stress, time management, and anxiety. The only requirement of a contributor is that he or she is a BC student. Thomas McGuinness, director of University Counseling Services, will also read submissions to the blog to ensure that they do not contain triggering language or messages, Marchese said.

“We’re aiming to be something that’s very comprehensive,” he said.
Mental health affects everyone, either indirectly or directly. UGBC’s mental health initiative (MHI), or Be Conscious Campaign, hopes to spark the desire for education about mental health and in doing so, make it less of a taboo topic, said Cassidy Gallegos, the coordinator of the Be Conscious team.

The MHI blog takes advantage of social media to publicize everything that the Be Conscious campaign is working on. Gallegos hopes it will become a hub where students can share their stories and find resources.

“It would be great if the website becomes known by all students in the future,” she said. “I’m really hopeful and confident in the BC student body and super inspired by the support and desire students have to partake in this conversation, and to take part in spreading that hope to other students who may need a little bit of it.”

In prior years, UGBC has not made mental health a priority. This year, Marchese hopes the efforts of the Be Conscious campaign will spark a lasting conversation. Students need to talk about mental health every year, he said. BC does a good job of reaching a certain population of students, but not in reaching everyone, he said, adding that mental health is not something that can be touched upon briefly.

“I love one-week events like Love Your Body week, but the issue with one-week events is that that conversation usually stops on Friday,” he said. “Mental health is way too important to stop on Friday.”

In order to further the conversation, the Be Conscious campaign is working on increasing the amount of students who know that University Counseling Services is a resource for them. All of the mental health initiatives this year will focus on connecting students to mental health resources on campus, Fiore-Chettiar said.

“My greatest hope for BC Ignites, Be Conscious, and the student body as a whole, is that we will begin to see a shift in conversations about mental health,” she said. “We want an open and honest dialogue to change the way that we as a student body collectively think about and react to mental health issues.”

Although Be Conscious hopes to connect even more students to mental health resources, a significant number of students do utilize UCS, said Associate Director Craig Burns.
Last year, 1,800 distinct students came into the counseling center, with 11,000 visits in total. In any one year, the center sees about 13 percent of the student body. Across a four-year span, 25 percent of undergraduate students come to UCS at some point, Burns said.

“We here at BC feel very fortunate to be well supported by the administration and pretty well connected throughout the University and also very well utilized by students,” he said. “The last thing we want is someone feeling like they can’t access services that would be helpful.”

This year, UGBC opted to host Ignites in the fall in order to open up the dialogue about mental health as soon as possible. In addition to Ignites, the Be Conscious campaign will be hosting more events this semester, including the What I Be photo campaign, which aims to promote security through highlighting insecurities, and a speaking event with Kevin Breel, a stand-up comedian who struggled with depression.

Mental illness is a prevalent issue on campus, but many students are afraid to reach out, said Elizabeth Farrenkopf, director of Ignites.

“We think it’s a really important issue that affects so many students, but so many students are either afraid to reach out or don’t really know what resources are available,” she said. “We thought this would be a great way to bring awareness to campus.”

McGuinness was the keynote speaker at last night’s Ignites. The college years are developmentally critical because there is so much going on in students’ lives intellectually, socially, spiritually, and physically, he said.

“There are a lot of challenges, great friendships, and you have a lot of fun doing exciting things, but it’s also a time of stress, uncertainty, and self-doubt,” he said. “It’s a time when things can get overwhelming for students.”

There are three main reasons that students come to the counseling center, he said. Students come for developmental issues, like navigating new relationships, situational crises, like illness or death in the family, or ongoing mental health problems, like depression and anxiety, he said.
According to a recent survey, 5 percent of BC undergrads reported having made a suicide attempt at some point in their lives, and 13 percent of BC undergrads reported having seriously considered committing suicide—this means about 450 students have made suicide attempts, and 1,380 seriously considered killing themselves, McGuinness said.

After McGuinness’ keynote speech, seven undergraduate students shared their own stories. Kate Lewis, A&S ’15, spoke on her struggle with depression and anxiety and noted that she was not alone. One-third of college students report feeling so depressed that it is difficult to function—that is two and one-half students in every eight-man, she said.

“At a school where the prevalent lookaway makes it clear that we’re not interested in particularly deep social interactions on a day-to-day basis, it’s easier to say ‘I’m fine, how are you?’ than to get into the details of how sad we’re feeling,” she said. “A little honesty could go a long way. It’s not an easy thing to do, but the first step in breaking down our mental health stigma starts with ourselves—the simple mindfulness of what’s making you unhappy.”