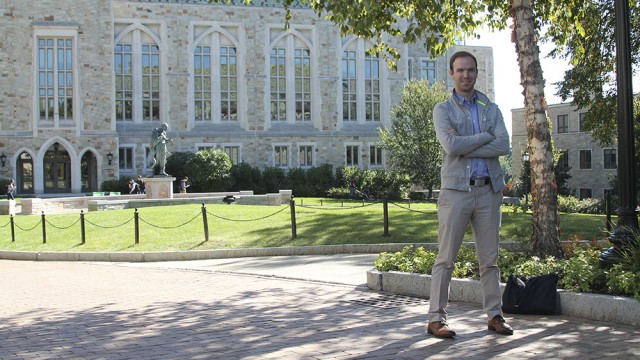 When Boston College debuted the “Happy” video on its YouTube channel last February, it became a viral sensation, emerging in the middle of winter as the perfect antidote to midterm-season gloom. The video, which brought together over 100 BC students, faculty and staff for a lip-sync rendition of the hit Pharrell Williams song, seemed to come out of nowhere, a fully-formed testament to school spirit released just in time for Spring Break.

For Sean Casey, though, “Happy” had a much different origin: it began in his nightmares.

Casey, a native of Los Angeles and a 2012 grad of BC, recalled watching Williams’ original music video to lift his spirits during a particularly harsh Boston winter. One night, though, the two realities mingled in his dreams.

“It was that video—the original Pharrell video, which is all based in Los Angeles—but it was based here in Boston,” Casey recalled. “It was almost hellish, in the sense that the song was playing and there’s, like, someone in a huge parka standing waiting for the T in negative degree weather, being buried under a blizzard.”

The next morning, as he joked about the dream to co-workers at the Office of News and Public Affairs, an idea formed in Casey’s mind: why not make a BC version of the video?

Casey was the idea man for “Happy,” but as the video producer for BC, his role hardly ends there. He conceives, shoots, and edits videos for the Office of News and Public Affairs, overseeing the process from start to finish. Sometimes he works within a very defined, limited format, like the 30-second “Ever to Excel” PSA that debuted earlier this month, or the annual Pops on the Heights video, which is consuming his attention this week. Other times, the rules are unwritten. “Happy” is the prime example of a video that emerged organically, and quickly—after his initial inspiration, Casey recalled scrambling to finish the video in six days, so that its release would coincide with the beginning of Spring Break and the song’s performance at the Oscars. A more recent example is “The First Two Weeks,” a two-minute video highlighting major campus events early this semester, from the Mass of the Holy Spirit to the football team’s upset victory over USC.

When he talks about his work, though, Casey is keen to emphasize the spirit of collaboration that goes into each video. “It takes a village” to make a video, Casey said, and whether brainstorming initial concepts or fine-tuning soundtrack choices, he often turns to his colleagues as a sounding board.

The Office of News and Public Affairs guides his work in more strategic ways, too. Much of the office’s video strategy is driven by detailed analytics and social media data. Casey cited Deputy Director Patricia Delaney and Social Media Manager Melissa Beecher as key partners in distributing the videos and launching them at optimal times. After a video’s release, analytics are scrutinized to examine its penetration into target demographics. Casey talked about these matters with the air of a seasoned professional, stressing that the distribution models are at least as important as content. “You can be Spielberg and create the next Best Picture or the next Citizen Kane,” he said, “but if you don’t have a way to distribute that video, no one will ever see it, no one will ever care.”

Yet the ultimate key to BC’s video operation, Casey suggested, lies in something more intangible than analytics. It’s in the spirit of the campus itself—a spirit of community and family that he believes is unique to BC. Having briefly worked for the video team at Northeastern after graduation, Casey attested that there is something fundamentally different about the attitude at BC—a friendly and participatory atmosphere that makes his job much easier, and which made a video like “Happy” possible in the first place. Indeed, the spirit that produced “Happy” now seems to be spreading on campus. Just this week, students involved in the Church in the 21st Century Center produced a BC version of Taylor Swift’s “Shake it Off” for Agape Latte. Casey watched a rough cut and offered some pointers to the younger filmmakers ahead of the video’s release on Wednesday.

Casey demonstrates real enthusiasm when talking about such student initiatives, perhaps recalling his own time as an undergraduate film student at BC. During those years, Casey helped produce videos for News and Public Affairs, while simultaneously working at 40 Shades Media, an independent media company run by his brother Kevin, BC ’04. He describes the film community at BC as small but tight-knit—they may not have had the kind of equipment that USC film students enjoyed, but such constraints actually contributed to their creativity.

Now he gets to play with slightly more expensive toys, including a recently acquired camera drone, which was used extensively in “The First Two Weeks.” But such technologies are a means to an end, and not an end in themselves. “The only rule of film is, whatever works,” said Casey, who always has his camera set on the story of BC—or rather, the many stories that make up life on this campus.

“That’s the beauty of it, is there’s never a shortage of good things to film, of stories to tell,” he said. “It’s our hope to continue to tell them.”

Correction: This article originally misstated that Sean Casey produces videos for the Office of Marketing Communication.