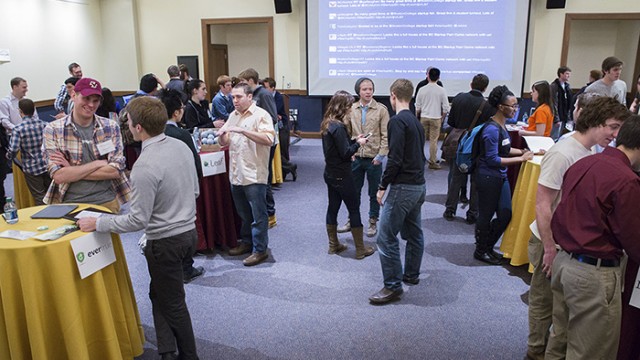 Boston College’s Entrepreneur Society (BCES) is hosting its third annual StartUp Scramble event in hopes of creating an open forum for BC students to exchange their ideas about potential startups and explore the growing entrepreneurial culture on BC’s campus by pitching ideas to real investors and getting teams to work on ideas together.

“We’re the student club that tries to put together community-building events for entrepreneurs,” said Derek Switaj, BCES president and CSOM ’15. “The BC entrepreneur society is kind of like the ground floor.”

The weekend-long event the society is hosting will take place from Friday, Oct. 3 to Sunday, Oct. 5. “This is not a business weekend, this is an entrepreneur weekend— it’s for everybody,” Switaj said.

The StartUp Scramble is a boot-camp designed to get students to think about and express their ideas in terms of what they think they may be able to contribute to the entrepreneurial scene. Workshops include a series on legal issues and venture building and will have students working together in teams to try to develop a functional startup.

“It’s not stuff that you can do in the classrooms, this is something that you can do and actually get your hands on this,” said Cathy Deng, BCES vice president and CSOM ’16.

In past years, students who have taken part in this event have gone onto submit their ideas further to competitions such as BC’s Venture Competition (BCVC), where contestants receive more than $30,000 in awards. Last year’s first and second place winners participated in the StartUp Scramble.

“The goal is to get high-quality feedback and build your personal skill set—there’s no winner, there’s no loser, this is a personal-skill development weekend to give people the skills to eventually move on to starting a company or entering BCVC,” Switaj said.

Anyone across the spectrum of majors and academic interests can come to the Scramble and benefit from myriad skills that students will be able to use in any profession, the organizers said.

“It’s not just a CSOM thing,” Deng said. “For example, I am more interested in math personally, but I really love interacting with people who have these business ideas, and I love working with them and having interest in the economy but also contributing whatever other skills I have. It’s really interesting to incorporate ideas of other areas of academics and then transplant them into a business idea, and that’s something that maybe CSOM kids need from other parts of the school.”

The event seeks to stir up BC’s entrepreneurial scene, as it is very much alive and well, according to Switaj and Deng. The Scramble specifically encourages students to pitch their ideas so they can receive constructive criticism from other students.

“Scramble was really [started] out of the need to get entrepreneurs on campus to just meet and talk with each other,” Switaj said. “There’s this stigma around being in ‘stealth mode’. If I have an idea, I don’t want to tell people my idea because I’m worried about getting bad feedback … or I’m worried about somebody stealing it—and we want to stamp out that idea and show people, ‘Hey, this is a BC community of friends and family here, we want to support you and help your ideas and your personal development grow.”

Just like the students who will be pitching their ideas throughout the weekend, it takes an entire team to organize the structure and activities for the weekend-long event. The club has assigned one e-board member to focus on the mentors, another on PR and outreach, another on the food, and finally another on pitching the event to classrooms and other clubs and organizing on-campus collaborations. Stephen Douglass is the founder of Scramble Systems and the facilitator for the BC StartUp Scramble.

“The skill sets that you learn at something like the Scramble are highly applicable to any lifestyle,” Switaj added. “Especially social justice people—if you want to start a non-profit or an NGO, that has a lot of the same skill sets needed as starting a company that’s for profit, so everybody should be coming to this event if they have any inclination to want to start something.”

Students like Deng and Switaj have also experienced firsthand the benefits that students can reap from becoming more involved in the entrepreneurial scene at BC.

“I’ve interned with a couple of startups, and I really enjoy the culture because you can really expand your role as you walk through it—it’s so flexible,” Deng said about her experience in the entrepreneurial scene.

“Right now, my roommate and I are floating some ideas to start up companies,” Switaj said. “I know as a person, I want to have creative autonomy. I want to start a company because that’s what I love. I love being a macro-level planner. And, I think that’s probably a common thread for a lot of entrepreneurs. Because again, it’s not what major you are, it’s what you do.”