Home » Moms And Pops: Highlights From Pops On The Heights 2014 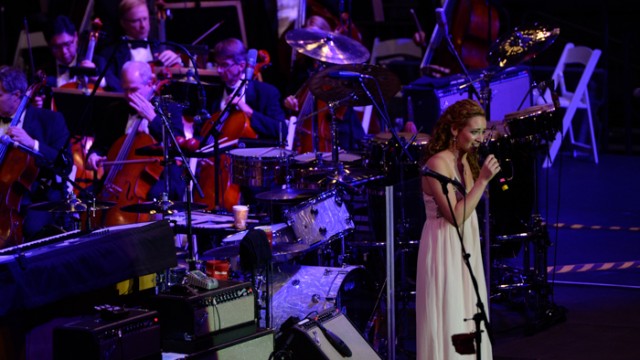 Moms And Pops: Highlights From Pops On The Heights 2014

As thousands of students, parents, and alumni found their seats in a packed Conte Forum on Friday night, they may not have predicted what an exciting evening it would be. Pops on The Heights is a benefit concert designed to raise money to give scholarships to Boston College undergraduates demonstrating financial need, founded in 1993. Friday’s concert featured guest performer Chris Isaak, who performed alongside the Boston Pops orchestra. The event has especially picked up momentum in the last few years, after being around for over 20. Pops on the Heights 2014 raised $5.2 million to fund 210 Pop Scholars at BC. In addition to being a financial success, the concert itself was incredibly entertaining, providing a mixed bag of performers, as well as a few surprises. Here are a few highlights from the night.

1. A welcome from The Screaming Eagles…

If you’ve been to any of the most recent home games, you’ll know that The Screaming Eagles have been performing selections from The Sound of Music this football season, bringing finesse and excitement to some old favorites. The Screaming Eagles again took us to Austria, except due to space restraints, there was none of that choreography that looks so spectacular on the field. Nonetheless, The Screaming Eagles provided a warm and inviting welcome to the thousands of spectators at Conte, putting on quite a show for BC families and students in attendance. Add in a touch of glitter from the Golden Eagles Dance Team, and you’re off with a solid introduction to set the tone for the evening.

Caroline Portu, A&S ’16, performed a stunning cover of the song “For Good” from the popular Broadway musical, Wicked. Lyrically, the song’s sentimental quality struck a chord with the crowd, and Portu herself sold the material with beauty and grace. By the end of the song, the crowd was on its feet—it was a strong reception for the 2013 BC Idol winner.

3. “Most Popular Song Ever Written Ever”

The introduction of “Let It Go” did manage to solicit audible chuckling and whispers from the crowd, but when The Pops and BC’s University Chorale joined together to sing the popular number from Frozen, the rendition of the Disney hit was hardly a joke. The performance, which featured the Chorale’s female members, was a sweet moment, enhanced by The Pops and their incredible orchestration of the song. Near all the audience was familiar with the song, and after having hundreds join in the melody from the bleachers, conductor Keith Lockhart declared it “the most popular song ever written, ever.” While this is a historically murky claim, Friday’s performance could convince you of its veracity.

To usher in the ever popular Beatles Sing-Along portion of the night, Lockhart began with a timeline. The British Invasion occurred 50 years ago, some 30 years before most current BC students were even born. This was a mildly terrifying factoid for some of the parents at the show. Even if the context of the performance did make them feel a bit old, however, it sure did not stop them from dancing. What started off as a humble sway (“Sgt. Pepper’s Lonely Hearts Club Band” led off the medley) slowly progressed to full-on swinging by the third song (“Twist and Shout”). In a mix of legendary songs, one in particular seemed to fit well with the event’s goals. As the audience joined in singing “With a Little Help From My Friends,” it was clear that there was a real sense of community present. Family supporting their students, benefactors supporting Pops Scholars, Eagles supporting fellow Eagles … All in all, this medley served as a fitting reminder of what brought the BC community together that night.

Rocker Chris Isaak took control of the show after intermission. Performing alongside The Pops, as well as his own band, Isaak topped off the night with fair deal of flavor. Interestly, most successful in Isaak’s set were his covers. He performed fabulous renditions of “Pretty Woman” and “Great Balls of Fire,” and encouraged plenty of dancing and singing along from Conte Forum. Isaak referred to himself as a “Sparkly Hillbilly,” which fit considering he glittered on stage—literally—and gave the concert a much-appreciated boost of energy with his silly anctics.

6. Ending with a pop

In a rather patriotic conclusion, The Screaming Eagles rejoined with The Pops to perform the University’s “For Boston” refrain and “Stars and Stripes Forever.” Most impressive about the ending was a flawlessly executed piccolo solo by one of BC’s own Screaming Eagles. Overall, these final moments represented an impressive coalescence of talent—Boston’s finest professional musicians and a strong group of undergraduate performers. Balloons fell from the ceiling at the close of the show, and were gleefully popped by even the most collected looking donors in the arena. 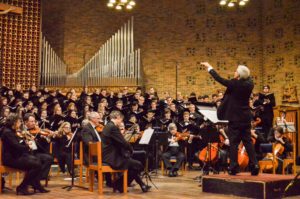