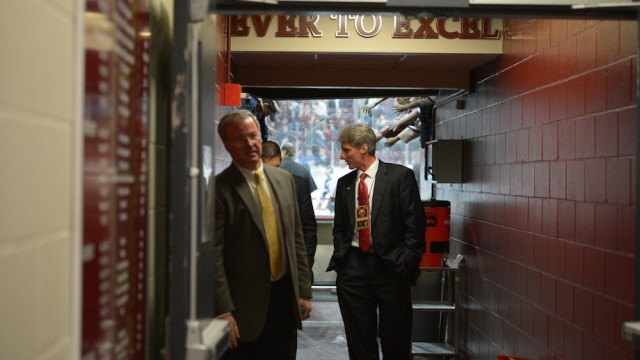 Michigan quarterback Shane Morris took a brutal hit to the head during the fourth quarter of his team’s loss to Minnesota on Saturday. Cameras showed that the sophomore was having trouble keeping his balance after the helmet-to-helmet collision, but, either out of ignorance or incompetence, the coaching staff chose to keep Morris in the game. He threw one more pass before he was finally subbed out. Morris was later carted off the field.

If coaches are too invested in either the process or the results of what happens during play, then there should be a neutral party on-site to step in during these types of situations. The Michigan coaching and training staff failed Morris this weekend, and local City Councilor Josh Zakim is looking to make sure that Boston’s college athletes are not similarly failed.

Zakim filed two ordinances with the City Council in May. One was a College Athlete Head Injury Gameday Safety Protocol, which was approved on Sept. 17 and is now awaiting the signature of Mayor Martin J. Walsh, WCAS ’09. It would require that the host school provide a neurotrauma consultant for any NCAA football, men’s lacrosse, or men’s or women’s ice hockey game taking place in the city, starting on July 1, 2015. The consultant will have full access to the benches and sidelines of both teams and is expected to identify concussion symptoms as well as observe examinations of the head, neck, and spine. Final decisions on an athlete’s status will remain with his or her school’s medical staff, but the recommendations of the consultant will be on the record.

The policies implemented by this ordinance are a good thing, but the fact that they are coming from local government is not. The NCAA settled a major class-action lawsuit after Zakim’s two bills were originally filed in May, and the settlement included the implementation of a head trauma protocol similar to the ordinance passed in Boston. Given the slow-moving nature of the NCAA and its member institutions when it comes to change, it makes sense that the City Council of Boston went ahead with the ordinance—but it’s not ideal for these changes to come through a city government.

The NCAA, its conferences, and its schools should see this as a reason to expedite necessary changes to the rules and policies for players’ health, safety, and benefits. Boston College Director of Athletics Brad Bates said that it makes more sense for these changes to come through college athletics’ governing bodies, and he’s right. Zakim’s other bill, a College Athlete Bill of Rights, would be more problematic for BC and the other schools in the city. While Bates said that BC follows most aspects of the second bill, he saw serious problems with one section, which states that schools are required to pay for lifetime medical coverage of injuries sustained during participation.

In order to avoid battling local governments, athletic departments across the country should implement these requirements on their own, either through their respective conferences or the NCAA. While much of the two bills can be found in the NCAA rulebook as guidelines, they should be altered so that they are requirements. Zakim, for the most part, is pushing for very basic protections for college athletes. Even though the NCAA is fighting multiple legal battles that could delay progress, that should not be an excuse to avoid addressing obvious issues.

Different cities should not have different rules for college athletes, but local officials should not have to feel compelled to interject themselves into universities’ governance because the system is broken. BC follows these basic rules and protects its athletes. The rest of the schools in the city likely do the same, but what happened to Morris shows that some NCAA schools still have a long way to go. It’s up to the NCAA to handle that problem so that local governments don’t have to.