Go Watch The Head Of The Charles

We come upon a warm fall day with a crisp wind—before us is the great Charles River. The sun shines down upon a small cluster of wandering Boston College freshmen that looks like it just stumbled upon the earth’s surface for the first time, as if the train transported it into another dimension rather than a couple miles from its home.

Finally, though, these freshmen find themselves on the banks of the Charles in mid-October—a group of people who, at the time, are only pretending to be the best of friends, bound together by a common interest.

And here, this conglomeration of college kids finds itself before a regatta. “Wow, a regatta!” they say, as they discuss the magnificence of the term. And they remember that it is fancy talk for a boat race.

This is not just any ordinary boat race down any ordinary river on any ordinary day, however. It is the illustrious Head of the Charles, an event that has become one of the largest and most popular regattas in the world, and if you have a friend who rows, you might know this.

But what’s even more important is that this year is the 50th anniversary of the regatta, and that’s a hefty anniversary.

As time passes, the six BC students find themselves lying on a blanket on the banks of the Charles River. It is bright, sunny, and surprisingly, not humid. The remnants of bread bowl chowder sit scattered across the grass surrounding them, and the soup warms their bellies.

Just as the sun dips behind the only cloud in the sky, a single boat cuts through the glassy waters, far beyond the reach of its competitors, and the students on the bank see a hand wave from the back of the boat, and they wave back as their friend’s boat races toward the finish.

The regatta comes to a steady close, and the group finds itself among the usual Sunday crowd in Boston, and it still rests upon the banks of the Charles, forgetting just for a few more hours that tomorrow is the start to another week of papers and midterms—for this moment, they are more than overworked college students.

We depart upon a cool fall evening—before us is a group of students growing closer as friends. It parades down Newbury St. to find a cheap burger restaurant where the college kids can continue on with the conversations that will come to dominate their days.

They talk about people, and football, and school, and then they leave. One of them departs with a victory on the water, but they all leave with the memory of a beautiful day in Boston.

The Head of the Charles is coming this weekend, and you should definitely be going.

fall new england head of the charles rowing
Coaching The Uncoachable: How To Deal With A Genius
Can BC’s Defense Give The Offense A Chance Against Clemson? 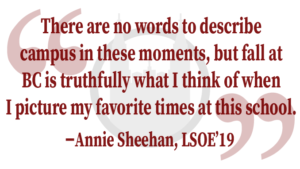