Among the bustle of the up and coming Seaport District—just some blocks and a few crosswalks beyond South Station—sits an iron and brick gate. The metallic structure functions as an artistic interruption in the starkness of the seaport, and it is charged with the responsibility of preserving spirit secrets and malt mysteries. Adorned with representations of nautical tools, the gate stands as tall today as it has for the past 20 years.

Just steps beyond the entrance rests an adult version of Willy Wonka’s infamous factory, in which the maritime aromas of the neighborhood are replaced with those of soaking barley.

Harpoon’s Boston Brewery has remained in the same Seaport location since 1986, and the local company’s founding principles have remained the same as well—the love of brewing great beer. This passionate notion is reiterated by their motto, “Love beer. Love Life. Harpoon,” which is scrawled across the metallic drums of the Boston brewery.

“As a young twenty-something living in Boston, I obviously loved the idea of taking a job at a brewery, but here we are doing so much more,” said Michelle Palerimo, a manager in Harpoon’s Boston Beer Hall. “On the human side of things, we are not just here making and serving beer but doing something bigger—we have set up this environment that creates a community.”

After passing the faded, red “H” logos that stamp a pathway from the gate into the industrial building, a set of stairs leads to the warmth of the Beer Hall. Laden with rustic, interior brick on one side and glass paneling that looks directly into the brewery on the other, the location’s main room is a conglomeration of the traditions and technologies of the modern beer making process. With a view of the Harbor just outside the windows, it’s a perfect space to enjoy a Boston-brewed beer.

Centered in the Beer Hall, stretching under the very New England pastoral chandeliers, lays a simple wooden bar counter dotted with glasses of different varieties of the brewery’s specialty, all of which flowed from the fanciful taps at the hands of Harpoon’s staff, the Beer Captains.

“Being a Beer Captain isn’t just about being able to answer any question a customer may have, but it allows us to be able to serve someone at the start of the night and watch them leave later, laughing and shaking hands with the people around them,” Palerimo said.

Truly deserving their maritime title, the employees of the brewery accentuate the intimate, beer-centric experience that Harpoon offers as they all function as bartenders, tour guides, and Beer Hall staff—as comfortable pouring a glass of Octoberfest as directing beer connoisseurs along the bottling line and barrels of the brewing process.

Founded by the original Beer Captains, Dan Kenary, Rich Doyle, and George Ligeti, in the mid-‘80s, the Boston brewery was originally surrounded by fish processing plants and car repair shops. As the Seaport experiences a transformation that began in 1986, Harpoon is still producing the same quality beers that the founders envisioned.

Always on hand among the seemingly endless varieties that the Beer Hall has on tap is Harpoon’s India Pale Ale, the beer that made the Boston brewery an immediate favorite for both locals and beer drinkers across the North East. First served in the summer of 1993, Harpoon IPA has been brewed in the same “spirit of fun and sociability,” ever since, according to their online beer guide.

“It’s an exciting time to be in craft beer,” said Harpoon Media Correspondent Liz Melby. “With the success of the craft beer industry, there is much more conversation about quality, locally brewed beer.”

After the success of its yearly options, Harpoon became one of the first breweries in the country to offer seasonal beers. Now, even if options ranging from unfiltered pumpkin ale to grapefruit summer shandy aren’t enough to get anyone of age excited, Harpoon has recently installed a 10 barrel pilot system which allows it to experiment with different styles in order to craft its next brew.

Harpoon’s love of all things beer goes beyond its multitude of selections and the seemingly unending knowledge of its Beer Captains, to make it into the Beer Hall’s famous pretzel recipe, at least 200 of which twist each day. Not only is the traditional IPA used in the dough, but it is also used to boil the pretzels in, as opposed to a more traditional cooking liquid. But the brewery doesn’t stop there, as it uses dried spent grain from the brewing tanks in its pretzel salt mixture and each of the pretzel dipping sauces, from Ale Mustard to IPA Cheddar Cheese, are made with seasonal beers on tap.

Whether it be through enjoying a seasonal ale and pretzel combination, taking a voyage through the brewery with one of their Beer Captains, or stopping by for a quick drink in the rustic Beer Hall, Harpoon hopes that it can share its passion for great beer in as many ways as there are drinks on tap. “Beer is a sociable product,” Melby said. “We want people to feel welcome, to feel proud of their local brewery, and to have a really wonderful beer drinking experience.”

And it is just that—an experience—that is part of what is hidden behind Harpoon’s entrance gate, burrowed between back alleys of the Seaport: an experience, a love of life, and most importantly, a love of beer.

Correction: The original version of this story incorrectly stated that the Harpoon Brewery produces light lagers like its founders envisioned. 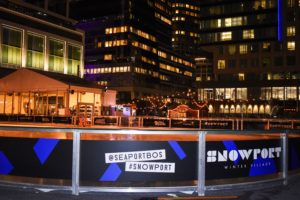