Introducing ‘The Silver Age’ Of Television

The finale of ‘Breaking Bad’ marked the end of TV’s Golden Age. Now we’re stuck making sense of the world it left behind.

When Walter White bowed out last spring—despite unfounded and malicious rumors that Breaking Bad could be headed for a sixth season—it was a momentous occasion for television. Breaking Bad is a really, really good show. It’s up there with Sopranos, The Wire, Mad Men, and a couple others plastered onto the Mount Rushmore of television (Note: if I’m found lying battered and broken in an alley, it’ll most likely be Community fans who did it over the above slight).

Anyway, the Golden Age had ended. The shift from whatever television was in the ’50s, to Knight Rider (’80s show about crime fighting car, yes it starred David Hasselhoff), to West Wing (Andrew Sorkin before going full Sorkin on The Newsroom), to finally the Breaking Bad premiere when critics and regular old viewers embraced in “a holy s—t television is awesome” bro hug. TV is cool.

But here’s the thing. Breaking Bad isn’t even AMC’s most popular show. That title goes to the occasionally contemplative zombie slasher The Walking Dead. And it’s not even AMC’s most stylized series. That goes to the eternally suave Mad Men. What I’m trying to do, by name dropping shows and opinions on them—is bring you, gently, into the world of modern television, and perhaps make you feel slightly uncomfortable about all the series you haven’t found time to watch.

Welcome to the Silver Age of Television. No, I didn’t come up with that. Yes, it’s from the Internet. Aren’t you glad there are people who think about these things so you don’t have to? Basically, it’s the dilemma of the 21st century, 14 years late. There’s too much watch. There’s too little time. It’s all so confusing, and the pressure’s on to keep up with an impossible long list of shows.

The Golden Age was about event television—those carefree Sunday nights when it was just you and a tragic story. Think of Lost. (Now forget about Lost, I never meant to upset you.) The Silver Age is about reclining dangerously in your family room as you queue up 11 straight episodes of American Horror Story, Orange Is the New Black, if you’re into tights, Arrow, or if you’re into animated tights, Young Justice.

We’ve reached the point where FOMO has crept into the virtual world. No one wants to miss out on the next great show. I can’t even finish The Office because I’m afraid of missing out on the next Office. The time to watch these shows is relatively scarce, so we’re forced to live with the guilt of never fully understanding what the Silver Age is about.

It’s like being at a party with too much food, too many drinks, too many pretty people. This isn’t a battle over the last drops of watermelon vodka at totally fun, totally clean “party” in Walsh. This is a party with too much fun to be had—a party where any decision you make must be judged against the decisions of others and those you might have made. I’ve spent more time flipping through my Netflix queue this week than I have actually watching anything.

All right, that’s probably not true. I’m also aware that comparing watching Netflix to going to a party is an ironic analogy, but that’s a discussion for another day. Ironic analogies aside, I feel obligated to warn you.

The self-righteous TV Police are everywhere. They might be in your classroom. You might pass them in the quad. You might wait an hour next to them on the Lower steak and cheese line. Maybe they’re even in your dorm. Maybe they live in the bunk below you. Maybe you’re dating one (just kidding, dating isn’t real). On Friday night and all nights henceforth, they’ll be dressed up as vampires, Mario and Luigi, maybe even … Batman. They’ll act cool, channeling the inner Tao of Walter White, a fictional murderer.

You’ll say, “yeah, maybe I did watch the second season of Arrow a couple weekends ago.” They’ll give you a cautionary glance. They’ll say, “you got to check out True Detective. It’s so deep, man.” “Yeah, kind of like How To Lose A Guy in 10 Days deep?” They’ll look like they’ve seen a ghost. “But yeah dude you got to check out House of Cards it’s so good.” Sure, but are you sure it’s not just a mediocre show without any semblance of narrative pace that you watched in one day so it all blurs together like old chowder?

But I know them for who they really are—a sick pervasion of the Thought Police. They’re out there, always watching what you’re watching, trying to get you to watch what they watch. The Television Police stand for nothing but their own self-gratification. I know them, because often I’m one of them.

Welcome to television. Let’s check your pretension at the door.

house of cards television netflix breaking bad sopranos orange is the new black
Restaurants Are Tapping Into The Social Side Of Dining
Foo Fighters Serve Up ‘Feast Of The Famine,’ And More Singles This Week 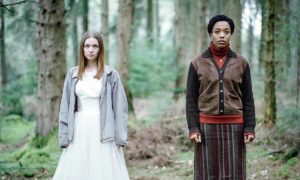