How Soon Is Too Soon? ‘SNL’ Pushing The Limits of Comedy

The tension between comedy and tragedy was clear on Saturday, when Chris Rock opened ‘SNL’ with a joke on the Boston Marathon Bombings.

In his opening monologue of SNL on Saturday, Chris Rock did what he does best: stirring up controversy and pushing the limits of comedy—but this time, with jokes on the Boston Marathon Bombing. “Just think about it, 26 miles is a long drive,” said Rock on Saturday. “People jogging for 26 miles, their knees are hurting … you’ve been training for a year, you finally get to the finish line, and somebody screams ‘RUN!’”

In the same monologue, Rock joked about Sept. 11, making jabs at Freedom Tower, which opened on Ground Zero Monday. “They should change the name to from the Freedom Tower to the Never-Going-In-There Tower, ‘cause I’m never going in there,” he said. “What are they thinking? Who’s the corporate sponsor? Target?”

To many here in Boston and for those in New York, it’s hard to hear a joke about those tragic days without a feeling incredible sadness, or at least reservation. In his monologue, Rock became one of the first comedians to joke publicly about the Boston attack. In doing so, he put himself at the forefront of controversy, raising the question: how early is too early? Will we ever be able to joke about these events without offending anyone?

Chris Rock is no stranger to controversy. His stand-up in the past has included jokes varying from topics such as racism, domestic abuse, AIDS, slavery, and abortion—and the list hardly ends there. Almost 20 years ago, he actually was fired from SNL for causing so much trouble.

The question “how soon is too soon?” will have a different answer for everyone. Imagining being a mother of one of the victims of these tragedies and watching last Saturday’s episode changes the perspective. Jokes about terrorism can arguably never be funny, certainly not for those closest to the events.

Many critics will praise Rock for pushing the envelope with his humor. If we can’t joke about terrorism, they claim, the terrorists win. Controversy is what comedians thrive off of. From Aziz Ansari to David Letterman, there is not a successful comedian out there today who does not use shock comedy from time to time. And if comedians can joke about atrocities such as rape or racism, is that all that different from terrorism?

Rock knew that he would face criticism for his monologue, and at one point even says, “Hey, I’m not joking about 9/11.” Yet it’s hard to believe him—only moments before he was cracked a joke on the Freedom Tower corporate sponsorship, the punchline “Target.”

But it comes down to this: comedians are the ones who allow us to recover from tragedy. My grandmother can still point to the first person who made her laugh after my grandfather died. The return of shows like The Tonight Show and Late Night with David Letterman made return to life after Sept. 11 easier, and while humor frequently gets us into problems, it also takes us away from others. Being able to laugh after tragedy is vital to recovery.

It is the job of a comic to push the line. His or her job is to confront societal issues, challenge authorities, and probe audiences to tease out just why we keep from talking about certain issues. Living in a city like Boston—where the sense of pride is so strong—it isn’t easy to see such a devastating moment in our history turned into the punch line of a joke. But that is not what Rock did. He didn’t make fun of the victims or praise the terrorists. He praised the runners for their dedication and the “good people of Boston” for bouncing back. He recognized the integrity of the event, and, like a good comedian, his jokes encouraged us to get back up and running. 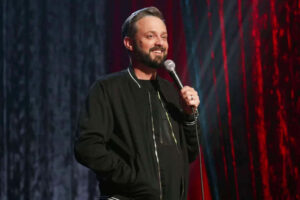