Home » Perfect Or Not, Love Yourself
Column, Featured Column

Perfect Or Not, Love Yourself

Next week, though, I’m breaking out of the old comfort zone and doing all of those things. I’m going to be in The Good Body, a set of monologues written by Eve Ensler of Vagina Monologues fame.

The staged reading that about a dozen girls and I are going to put on caps off Love Your Body Week, one of the Women’s Center’s many awareness initiatives of the year. The point is to get people—men and women—to consider the way they think about their bodies, why they think about them like that, and how to change their attitudes so that every person loves the body he or she has.

I thought The Good Body would be a safe bet. It’s about body image and self worth, not sexual awakenings and vaginas. Right? Well, not quite. This is Eve Ensler we’re talking about, after all.

So I tried out, even though I had no clue what I was doing, because I wanted to try something different. I wanted to shake up my life a little bit.

To my infinite surprise, I got a part—I’m apparently not a bad actress. And I’m told I can do a mean Italian accent.

One of the things that’s so great about doing this show is that it gives us performers, and by extension the audience, a way to talk about issues and ideas that we wouldn’t normally feel comfortable discussing. We have the play as an excuse, in some way—I didn’t say I hated my stomach, Eve did. I never said I gave up eating bread because I think I’m fat, that’s just the character I’m playing.

But we also have the play as a starting point. Ok, so you didn’t say it. Eve did. But haven’t we all thought it before? Can we at least admit that?
Most of the characters consider their bodies flawed, and they get a sort of relief out of being able to talk to someone—to the audience—about their issues with body image. And it’s cathartic for the audience too, or at least, I hope it will be, because it’s all so familiar. We enact it all the time. I hate my insert-body-part-here. I wish I could cover up my whatever. Won’t it be nice to see that no one’s alone in their dissatisfaction?

There’s another type of character, though, that I found refreshing in my first read-through of the play. It’s the girl who’s totally okay with her body. The one who loves food too much to diet, the one who’s realized that her plumpness is just part of her, the one who discovers that the less she worries about her body, the more it starts to look the way she wants.

When everyone else is bashing their bodies, it’s hard to speak up and say, “I like myself just the way I am, flaws and all.” It can come off as overcompensation, or even as being a show off. It’s almost socially unacceptable to not see your body as a disaster, much less say it aloud.

That’s why I like this play. It gives people who constantly worry about their bodies a way to feel less ashamed of our insecurities because, look, here are half a dozen other people who are equally worried. It also gives people who are confident in themselves a chance to speak up without fear of being misinterpreted. It’s okay to be a little insecure, but it’s also ok to own it. Flaunt it. Don’t they say to use what your mama gave you, or something like that?

It’s clear that by the end of this play, Ensler hopes that everyone will come to appreciate his or her body for what it is, without comparing it to everyone else’s figure. While it can take a long time to get there—she certainly goes to great lengths to convince herself to love her body—there’s no shame in talking about the journey, no matter where you are on it.

So come see us. Listen to us talk about all sorts of uncomfortable things. Hopefully, when the lights go up, you’ll be a little more able to talk and listen about those same things.

love your body week The Good Body
Greek Life Has Been A Part Of BC’s Campus Before, But The Tradition Seems Unlikely To Make A Resurgence
Love Your Body Week 2014 Celebrates Every Body 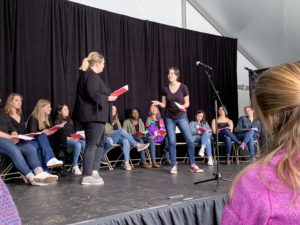