Resisting The Normalization Of Love

BuzzFeed is great. Clever and to the point, it’s accessible to our generation, and it’s clear that we, as late teens and early 20-somethings, are its target. Information and entertainment are presented in lists or as condensed paragraphs, making it easy to digest in our ever-busy lives. And, normally, I love it. Who doesn’t want to take a quiz to find out who your inner Disney princess is, or grab a nugget of information about pop culture?

Yet, scrolling through the webpage this past weekend, I stumbled across a video that I wasn’t expecting—or at least, I wasn’t expecting my reaction. Entitled “11 Signs You’re Ready To Say ‘I Love You,’” it was a typical BuzzFeed publication, targeted directly at our generation. And the video was cute—an adorable couple experiencing the “11 signs” that prove, to themselves and to others, that they were ready to say those three big words. But wait—since when is there a checklist for love?

First, lets jump back to the video: The 11 things included being able to plan for your future, being comfortable around each other, and being able to have a conversation with the other’s family. Nothing out of the norm was proposed, I thought. But in that exact thought lies the problem. I was creating a norm for relationships, for the intimate experiences that should be between only the people involved, and I was an outsider. I failed to remember that every love is different—it arises out of unique circumstances, is composed of different people, and exists in completely dissimilar contexts. Who was I, or anyone else for that matter, to judge such a thing by any standard?

Still, according to BuzzFeed, our generation’s understanding of love has been reduced to a list of qualifications that are considered the norm. Why and how have we reached this point of depersonalization, you ask? Technology. Through constant Instagramming, Facebook checking, and communication, the Millennials have created what experts call a “group mentality.” The desire to fit a norm is not new, yet the obsession we as a generation have is, ironically, certainly not normal. While there are benefits of highly socialized lives, such as networking and the ability to stay connected with those far away, there are also drawbacks. Namely, we feel we must be on the same page as and constantly on par with our peers. There is a constant pressure to be average, to not have oddities that could ostracize us from the group of which we so desperately feel the need to be a part. And so we normalize—we normalize what is “healthy,” even if everybody is different; we normalize being a certain gender, limiting both; and apparently, we normalize even the most personal of things: love.

Thus, through technology, we have created a culture devoid of personal moments. I’m not talking about the need to share everything you do via social media, though that in itself is its own concern, but rather the fact that we feel the need to measure relationships on a scale that is determined by our peers. We strip away personal aspects, aiming simply to meet the prescribed benchmarks. Have you gone out to dinner together? You’re dating. Have you been together for a few months? You can call her your girlfriend. Have you met your significant other’s parents? You can say “I love you.”

The sad truth is that BuzzFeed made a checklist for love because our generation felt it needed one. We cannot determine relationships and their meaning in our lives for ourselves because we have to make sure we are experiencing the same thing as those around us before we can label it. But what about just knowing, simply looking at the other and knowing?

Of course, I’m not saying I don’t suffer from the plague our generation has specifically designed (unintentionally, of course) to hinder only ourselves. Yet, if I too am afflicted by “group mentality,” I need to understand it. So I pondered how else it was affecting my own relationships and those of my peers. And then it hit me—the group mentality is perpetuating the game. I’m referring to the “wait a few hours to text back, three days to contact, and under no circumstance show too much interest” game. Fun for no party involved, the game thrives because we allow it to thrive. Now “group mentality” cannot be faulted for creating the game, as that is rooted in our fear of rejection, but it certainly perpetuates it. The game feeds off of our desire to be similar to those around us. It gives us “guidelines” to follow when entering a relationship, as terrible as they may be.

But wait, what if I AM interested, and I WANT to get to know someone? Well, the game tells me it’s not appropriate and that I’ll come off as creepy if I act too interested. So, I partake in the group mentality. I check in with my friends to make sure I’m not over-zealous, I try to act casual and I show little, if any, interest. As if reading from an instruction manual, I am forced to play the game.

Breaking away from the norm is not easy. In fact, I’m not even sure it is always possible. But maybe, in some cases, the difficulty is worth it. So, from now on I refuse to let others tell me how to act in my relationships, and I refuse to play the game. I invite you to do the same. Love is not normal, it is extraordinary, complicated, beautiful, and a completely unique experience for everyone. It doesn’t deserve to be reduced to a checklist, to be normalized. So, when should you tell that special someone you love him or her? Whenever you’re damn ready. 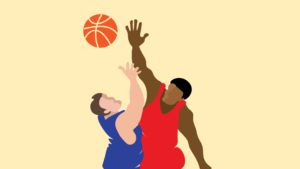