Workman Dominates At The Net On Senior Day

While it was officially Senior Day in Power Gym, it was unofficially Katty Workman Day. The outside hitter, who came into yesterday’s match ranked seventh in the ACC with 3.39 kills per set, led all players with 12 kills and led BC with 34 total attacks. The junior also recorded 10 digs in the match, setting an all-time Boston College record with her 38th career double-double and helping BC (9-13) sweep the Clemson Tigers (17-10).

“Katty has really worked hard in the last two weeks to step up her game offensively,” said head coach Chris Campbell. “She has always been one of the hardest hitters in the conference, and she has always had the power to kill the ball. She is making such great decisions now on when to rip on the ball and when to move it to different parts of the floor.”

The Eagles looked far stronger than their 9-13 record might suggest, firmly controlling each set en route to their 3-0 win. All three seniors started the match and highlighted their own strengths throughout. Kellie Barnum led the game with 36 assists, advancing her season total to 804, while Courtney Castle had a team-high 18 digs on the day. Lauren Fields totaled an impressive six digs while playing in one rotation.

Campbell praised the trio’s efforts. “Kellie, over the course of the season, has continued to get better. That’s often tough to do as a senior,” he said.Courtney switched positions and began playing libero this year. That’s not an easy thing to do your senior year, but she’s embraced the challenge of it. Every time Lauren steps on the floor, she brings a lift to the team. She’s been doing fantastic back there for us, and she can be an emotional charge when we most need it. The three of them have been playing like seniors, and to see them cap that tonight is really rewarding for them.”

BC started off strong from the beginning, keeping a lead of a few points as Clemson continued to fight back. The Eagles eventually sparked a run, at one point holding a 10-point lead. Although the squad allowed the Tigers a run of their own on BC’s set point, the Eagles cut the comeback short, winning 25-18 and taking a 1-0 lead in the match.

After falling behind for a couple points early in the second set, BC regained its flow and held the lead for the remainder of the set. Although Clemson cut the deficit to one several times, the Eagles always secured the next point. BC made sure to minimize its mistakes in this set, totaling just two attack errors to Clemson’s eight.

The tune barely changed at all in the third set, though BC did allow Clemson to tie the game at 18. The Eagles took their second and final timeout at this point, looking to refocus for the final seven points. They did just that, going on a 6-1 run to make the score 24-19. Clemson would get one more point in the match before BC finished out the 3-0 sweep.

“It’s a good win,” Campbell said. “Clemson’s a great program. They pushed in every set, as you expect a great team to do. But, we were able to maintain our composure, and I was really happy with that.”
This win marks BC’s first sweep in over a month, when the team beat Syracuse 3-0, and it improves BC’s record to 5-7 in the ACC.

Besides the seniors and Workman, Julia Topor also had a strong match. She recorded a double-double of her own, finishing with 11 kills and 10 digs. Barnum, Anna Skold, and Kam McLain led the effort up front, each recording at least four assisted blocks. Meanwhile, the entire team’s effort led to a sizable gap in attack percentage, with BC finishing at .274 to Clemson’s .104.

volleyball bc volleyball workman
No. 8 UNC Outlasts BC In Three Highly Contested Sets
ACC Tournament’s First Round Too Much Of A Hurdle For Eagles 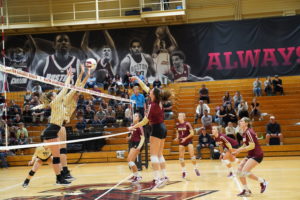