The setting is the New York City studio of abstract artist Mark Rothko. Finished paintings of pulsating red squares, entrapped in black boxes, fill the backdrop while half-finished red and black pieces sit in the foreground—as if daring the audience to come and complete them. This is stage set for Red in the Bonn Studio Theater—the show that will run today through Saturday.

Crimson, scarlet, ruby, cherry, maroon: red-upon-red saturates the stage as Rothko (Leo Bond, LGSOE ’16) asks the audience, “What do you see?” His assistant Ken, (Matt Consalvo, A&S ’15) speaks for us when he answers the only justifiable response: red. Yet both the answer and the color are more than they appear to be, as Red expertly paints a tale of art, color, and just what it is to be human.

Director Joe Meade, A&S ’15, brings the Tony Award winning play Red, written by John Logan, to Bonn in great style. Set in the late 1950s at the end of abstract expressionist Rothko’s career, Red begins as a decaying and tired Rothko undertakes creating a set of paintings for a newly-built restaurant with the help of his young, naive assistant, Ken. Over the course of the next two years, Rothko attempts to instill the underlying ideas behind his art in Ken as they struggle to reconcile artistic perspectives.

It is a clash of young and old, novel and antiquated, red and black. Once at the precipice of a budding movement, Rothko sees his contemporaries fall victim to consumer culture and depression—demons he is forced to face himself over the course of the show. Meanwhile, Ken’s past and future are in constant limbo, and this inner turmoil boils over into the studio.

Consalvo does well in the role of Ken, shifting from a timid, unknowing ingenue to a burgeoning artist willing to challenge Rothko. Respectively, Bond’s take on the influential artist is a powerful depiction of a virtuoso in decline, someone who has it all and still lacks. At first, the two seem a little hesitant to fully dive into their characters, but this doubt quickly diminishes, leaving us a show that is bigger than the sum of its parts. These two actors play off each other masterfully, each changing as the relationship between them becomes more intimate. It is here that they truly shine, free to feed off of the red-hot energy created as egos and tempers meet, sparks flying in the name of their art.

The whole concept of what makes an artist helps the play to transcend the period in which it is set. Rothko’s seemingly amateur paintings are deconstructed into the bare truth behind each brushstroke as we, along with Ken, are challenged to see more than just red. Asking us to “allow them their grandeur in silence,” we can’t help but admire Rothko’s incessant need to present tragedy, color, and motion through his paintings to an unsophisticated, oftentimes apathetic, audience.

Red dares audiences to look at their lives through the lens of color, a refreshing task that Red masterfully handles, allowing them to consider their own preconceptions about art and where pieces like Rothko’s fit in their own, personal artistic framework.

The lighting and sound design for Red bring the show’s concept to our senses, working in tandem with a skillful cast. As Rothko says in the show, lighting is everything when it comes to his art: the right lights intensify his work and allow the colors to dance on the canvas. So too do the light cues function within Red, allowing the actors to dance, so to speak, across the stage where they would otherwise be left still. Instead of just playing support, the lights take a leading role in progressing the story, setting the scene, adopting a mood, or displaying a change.

The sound appears as if a soundtrack in a movie, seemingly swelling in emotional crescendos and heightening feeling in what would otherwise be silence. Aided by the craftily designed set, Rothko’s studio is transported 50 years into the future and the actors are free to paint their every emotion into the show. The end result is pulsating with vibrant, red energy that builds tension between the two, and ultimately, creates a synergy between them.

The mind keeps wandering back to the show’s first question: “What do you see?” Again and again, the answer seems to be “red.” The glowing passion both characters possess, their bloodred aggression as they fight for their beliefs, the subtle friendship that develops, and the vermilion fire felt leaving the theater, emblazoned by a newfound respect for the color. The beauty of Red is that, just like the Rothko paintings it is about, it is a slightly different shade for every audience member, no two experiences exactly alike. Red is simultaneously everything red and anything but.

Featured Image by Arthur Balin / For The Heights 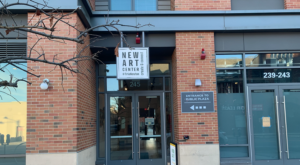