Greek Life Comes To Robsham With ‘The Trojan Women’

Constructing a post-apocalyptic world in Robsham, the BC theatre department offers a powerful take on Euripides’ tragedy.

We all know the story—Paris kidnaps Helen, or Helen seduces Paris, really depending on who you ask, even now. Scorned Menelaus and his brother Agamemnon rally the Greeks to their cause and sail across the Aegean Sea to Troy. The Trojan War ensues. Hector falls. Achilles falls. The Trojans accept an odd wooden horse, and then, the city and the rest of its men fall, sacked beneath the Greek army.

Written by Euripides, The Trojan Women takes a look at Troy after the infamous horse incident. The city’s men have mostly been killed or captured, but the women remain. The Trojan Women takes up the glorious war epic and gives it a haunting epilogue—the last breath of a dying city and its people. And that last breath is told through the anguished pain of the women whose fate now lies in slavery to the men who’ve destroyed their home—principally the fates of Hecuba, queen of Troy and mother to Hector; Cassandra, a daughter of Hecuba; Andromache, the widow of Hector, and even the famed Helen.

Director John Houchin and his team have given the Boston College production of The Trojan Women a timeless and “eternal” feel. This is not eternal beauty, however, but eternal war and destruction. The production opens in darkness to the chaotic hum of war—guns, explosions, and the beat of helicopter. The set displays the bones of a city. Costumes range from tattered contemporary wear to Helen’s classic and impeccable golden dress. Euripides called it Troy, but for the purpose of the production, it could be set anywhere, in any time. The Trojan Women may be a Greek tragedy, but here, the city is post-apocalyptic.

Like most classical Greek dramas, the action has already occurred off stage. What’s left is the women’s striking lack of power and torturous fate. The women must come to terms with their bleak reality, and while Euripides’ content hovers above redundancy with speech after speech, it’s the design of the production and the performance of the actors that keeps the play engaging. It has a Shakespearian quality, where the emotion and skill of the actor does more work than the actual words. Brendan Kennelly’s translation is particularly weighty, with fits of soaring abstraction. The story is told in the voices of these wrecked women, but it’s their eyes that draw you in.

Hecuba (played by Amanda Melvin, A&S ’17) carries the introduction and necessary transitions through the story. She’s the embodiment of the city—its fallen queen, claimed by the cunning Odysseus. Melvin takes on the persona of a much older woman with a hunched gate and radiates a combination of pride and horror.

After a lofty introduction from Poseidon and Athena, the production reaches a rhythm. The Greeks enter to claim the remaining women, one by one, for victorious Greek leaders. Virginal Cassandra is taken first to be the prize of King Agamemnon. Aryn Mello Pryor, A&S ’16, plays the prophetic Cassandra with a crazed flair. She peers into the audience, not pleading like Hecuba, but daring—there’s something off about Cassandra.

Sarah Mass, A&S ’15, appears next as Andromache. Mass carries the most intimate performance and carries the weight of the only real action that occurs in the story—the execution of her son due to a “boy who lives” fear that he might grow great like his father Hector. Mass’ horrified expression nearly matches the horrifying and disturbing scene around her as harsh light turns the set into a nightmare.

Helen, played by Caroline Portu, A&S ’16, appears last. Helen (and Portu) has a particularly difficult task. She carries the weight of fault. Helen must convince husband Menelaus that the war and the deaths of countless Greeks do not lie on her shoulders. And Portu does this a conviction of tone and certain stillness. She refrains from the expressiveness of the other women. The Trojan women remain unconvinced that the war cannot be blamed upon the golden hair of Helen, but she convinces the audience that something deeper than the work of one wily woman is at work here.

Trojan women do not dance. The time for dancing has long passed and, by the end, so has the time for tears. The BC production of The Trojan Women speaks to the gravity of the situation these women were placed in, bringing a compelling post-apocalyptic world to Robsham Theater. It’s a gritty, powerful alternate take on the fall of Troy and its mythological characters—devastatingly dark, beautifully human.

The Trojan Women’ runs in Robsham Theater Thursday, Nov. 20 through Sunday, Nov. 23. Tickets are available through the Robsham Box Office. 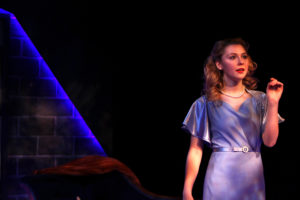