Devlin 008 was packed, and a quick scan of the oversized classroom could clue one in that these students weren’t here for a lecture. Early Saturday evening, the Heightsmen of Boston College were hosting their fall cafe—a culmination of the all-male a cappella group’s work through the fall semester. Here, the group debuted new tunes and also sang some classics from its repertoire—this time around, inviting male step team Sexual Chocolate along for the ride. Although a universally strong evening of music and performance, this year’s fall cafe had some stand-out moments. Here are the highs of the Heightsmen’s fall cafe.

Ushered in with some soulful dance, the Heightsmen’s rendition of T-Pain’s “Buy U A Drank” was a whole lot cooler than T-Pain—which admittedly, doesn’t necessarily say much in itself. Soloists David Goebel, A&S ’16, and Harrison Daubert, A&S ’15, garnered the audience’s attention with sultry R&B vocals and couple rap verses to match. The Heightsmen performed the song attentively, keeping with their pedigree of musicality even as the crowd responded, quite vocally, to the group’s comic dance routine. This song was the Heightsmen in its best form—fun and energetic, but always technically on point, too.

Owen Lyons, A&S ’17, took control with his powerful solo in the Penguins’ classic “Earth Angel.” Lyons was all about that bass, and with his shockingly deep and accurate low register, he had the audience craving more. The Heightsmen, however, aren’t about keeping in the comfort zone, and Lyons transitioned into a smooth falsetto by the song’s end, demonstrating a nearly boundless vocal range. Debuted in this fall cafe, “Earth Angel” will prove a strong addition to the Heightsmen’s repertoire in semesters to come.

Catering to its a cappella-loving audience, Sexual Chocolate made its entrance through song. Specifically, the group began a rousing pseudo-performance of Vanessa Carlton’s “A Thousand Miles.” Quickly admitting that they should leave singing to the Heightsmen, though, the Sexual Chocolate members dropped the vocals and kept to what they do best. A step team with strong performance traditions at BC, Sexual Chocolate did not fail to captivate the crowd, adding sweet flavor to the Heightmen’s rich sets. With precision, intensity, and charisma, the dance crew enhanced the evening in a way only a good dose of Chocolate really could. An all-male a cappella group and an all-male step team together in one place—as coach Steve Addazio might comment, “That’s a whole lotta dudes.”

Although Alicia Keys may seem like an odd choice for the Heightsmen’s testosterone-infused identity, their arrangement and performance of “If I Ain’t Got You” undoubtedly stole the show. With a stunning solo from Patrick Fei, A&S ’18, the vocals perfectly carried the lovesick emotion of Keys’ 2003 hit. Energizing the entire room, the Heightsmen’s “If I Ain’t Got You” was a power ballad with exceptional versatility. As Fei’s fellow Heightsmen stood behind the freshman singer—driving his solo home with impressive background vocals—the unity with the group was palpable.

In tune with Heightsmen tradition, the fall cafe serves as a testing ground for the group’s newest soloists. For four members of the group, Saturday’s show was a first fall cafe. Jeremy Medina, A&S ’17, Mike Mastellone, CSOM ’18, Michael McKernan, A&S ’17, and Fei all joined together in an elaborately choreographed dance before the ensemble’s last set. Grooving to songs like Justin Bieber’s “Baby” and Nicki Minaj’s “Anaconda,” the dance was a way for the audience and performers alike to relax and laugh, as well as an opportunity for a few of the newest Heightsmen to shake it off to some sick beats.

Leading off the night’s last set, the Heightsmen performed “Overnight,” a romantic, soulful song from Zac Brown Band. Although the Heightsmen might not be conventional country, they did manage to incorporate two songs from Zac Brown Band into their routine: both “Overnight” and “Colder Weather.” Neither tune seemed out of place, and the Heightsmen were able to put their own spin on the rustic, acoustic feel of these pieces and make them a powerful piece of repertoire. Sean Spata, A&S ’16, took the lead in “Overnight,” bringing a little country to Boston for the night. 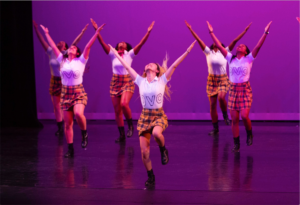