Robsham Theater lit up this weekend as Dance Ensemble brought style and story in its Vogue’ showcase.

Fashions may come and go with the seasons, but the Boston College Dance Ensemble—who presented its Vogue showcase in Robsham this weekend—is always in style. From DE’s moves to its costumes, the group was on-trend for its biannual performance, whose proceeds benefit the children of the local Campus School.

DE’s show featured a varied selection of 20 student-choreographed routines, which did not all fit the Vogue theme quite like a glove, but did all highlight the fierce technique and versatility of DE’s 32 dancers. The girls strutted their skills across various genres of dance, including ballet, pointe, lyrical, and tap. Whether clacking their heels to Passion Pit’s “Moth’s Wings” or twirling gracefully on their toes to “Ave Maria,” the dancers tailored their steps to different kinds of music for an altogether surprising and entertaining evening.

The definite high points of Vogue were the routines that enabled its dancers to break away from set formations and model individual flair and talent. Numbers such as “Rubber and Soul” choreographed by Emily Durkin, A&S ’17, for example, flaunted a sense of dynamism and seemed more dimensional than some of the others—largely because its dancers both soloed and were in sync at distinct points during the song.

DE excelled most when its choreographers focused not only on dancing, but also on storytelling. Routines like “Rubber and Soul” and “All The Lonely People” each possessed a narrative line that allowed the group to connect with the audience on a deeper level. Put together by fan favorite Taleen Shrikian, A&S ’15, “All The Lonely People” was choreographed to the music of the Beatles’ classic “Eleanor Rigby.” It described what it feels like to be bullied, teased, or ignored, conveying its message through lyrical dance moves. The routine was undoubtedly beautiful, but its appeal was more than just aesthetical—it was emotional, too.

While the sometimes inconsistent nature of the lineup distracted from Vogue’s theme as a whole (shifting from a Frank Sinatra routine to another set to “Vamos a La Playa” was slightly jarring), the diverse nature of the showcase was, paradoxically, one of its strengths. Guest performances by Indian dance group Masti and Latin dance group Fuego del Corazon outfitted the show with a certain cultural vigor. The two troupes performed patch worked medleys of songs for which they are known and loved.

Fuego, who won first place in the dance category last year at UGBC’s annual Showdown competition, delivered a fiery routine and was as brilliant and technically sound as always. With expectations being so high for the group, Fuego consistently has to transcend the standards it sets for itself. It has big shoes to fill every time it takes the stage. This Friday, when one of the group’s dancers was mysteriously missing her own shoes for the performance, Fuego’s Sydney McNeal, A&S ’15, rose to the challenge, exemplifying the pinnacle of dedication and high fashion by doing the salsa in her socks.

Robsham was practically transformed into a runway for Vogue’s finale performance, organized by DE’s officers. Channeling a kind of catwalk presence, each member of the group paraded across the floor in a line and was introduced over the speaker to music. The sequence not only gave the show a degree of panache, but also added a more personal touch. When the entire organization stood in front of the audience all together for the first and last time of the night, it was met by the applause of friends and family. The crowd seemed to come to a consensus—DE’s 35th fall showcase was all the rage. 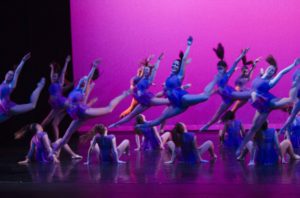 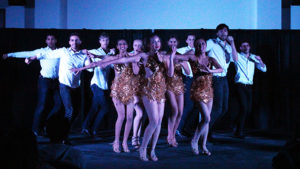