Among the family of Boston College student publications, The New England Classic has always been something of a black sheep.

Always, that is, since 2007, when a pair of sophomore girls stuck on College Road joked about smashing down their adjoining walls to make their own CoRo eight-man. They ended up making their own satirical publication instead.

Seven years later, the paper’s unofficial shepherds are Ben Shapiro, CSOM ’16, and Anthony Perasso, A&S ’17. On the New England Classic website, they go by John C. Reilly and L. Ron Cupboard, respectively: a sign of the paper’s commitment to anonymity, as well as its commitment to not taking itself too seriously. In fact, its very mission is to not take BC too seriously—to poke holes in the everyday fabric of life at BC with satire that is outrageous and often very close to home.

Student to skip last 9am Calculus I course "for old times' sake."

In many ways, The New England Classic retains the same basic strategy that has guided the paper since 2007. It has always been funded out-of-pocket, and printed without University aid or significant alumni donations. It usually appears about once a month in a simple paper issue, which is printed out at Eagle Print and then aggressively distributed around campus. The newest issue drops today, just in time for finals, and Shapiro noted that they are committed to continuing the print edition into the foreseeable future.

At the same time, though, The New England Classic has made considerable strides toward strategically expanding its reach and relevance. “Over the last couple of months, it has just really blown up,” Shapiro says. The key to this success, perhaps, lies in its presence on social media. On any given day, you can find The New England Classic engaging in a Twitter war with The Gavel, sarcastically tweeting about up-to-the-minute happenings on campus, or posting decidedly unattractive “#CarneyGrams.”

Carney's beauty has the power to brighten up even the dreariest of rainy days #CarneyGram pic.twitter.com/Av0kASXm3k

Moreover, the paper’s engagement with other campus publications has extended into its own content. Recent stories have included an “Inauthentic Eagles” piece featuring the Bapst grout wall, in a parody of the popular Gavel series, and a “His Campus BC” article about a Plex bro’s disgust at the relocation of the elliptical machines. Through pieces like these, the paper uses the style of The Onion and Clickhole to satirize BC publications as well as the way campus talks about itself. And through its expanded online presence, including a revamped website, the Classic has found new ways to assert its voice beyond the print edition and to tap into the daily foibles of BC students.

Talking with Shapiro and Perasso, it quickly becomes clear how shrewdly they understand what is on students’ minds. There is a science to tapping into the layered babble of the BC bubble. One crucial tool for finding comedic material is Yik Yak, the popular and anonymous messaging app. “Yik Yak is surprisingly effective at figuring out what people agree with,” Perasso explained. On a particularly rainy Tuesday, for instance, they noticed Yik Yak users overwhelmingly complaining about the weather, and then tailored their tweets to reflect that, picking up a dozen new followers over the course of a day.

Of course, relying on crowd-sourced anonymous messaging also has its problems. Shapiro discovered this for himself earlier this week, when he put a satirical spin on a Yik Yak post alleging that a freshman-area RA had been busted for drug possession. The original post, along with Shapiro’s ensuing story, was like pretty much everything The Classic writes factually false, but by sheer coincidence the joke story described a fictional RA whose floor assignment and major matched a real one. The result was an unfortunate misunderstanding, where the real student felt his reputation had been unfairly tarnished by those who mistook the satire for reality.

Shapiro took full responsibility for the incident on Monday, removing the story in question, issuing a public apology on the New England Classic’s website and social media accounts, and directly apologizing to the student. “We try and avoid those situations if possible, and we’re going to work harder in the future to make sure that doesn’t happen again,” Shapiro said.

This one incident aside, the paper has never run into any major trouble with those misinterpreting its content, or with the administration. In fact, the duo counts it as a source of pride that the official Boston College Twitter account is among the paper’s followers. “That was a big turning point for us, when Boston College followed us on Twitter,” Shapiro said, before half-jokingly adding, “We’re thinking that’s more of a way to just keep an eye on us.”

A lot more eyes are on The New England Classic these days, and when I asked the duo what was next for the publication, the answer was swift: world domination. Beyond that modest goal, Shapiro and Perasso hope to continue doing what they are doing: delivering a healthy stream of satire both in print and online. For both students, their brand of satire is a natural fit for BC’s campus culture and may even serve as a corrective to it.

“I think satire can thrive in the BC environment,” Perasso said. “It’s a little uptight; it’s homogenous, and that’s easy to poke fun at. And the positive side, I guess, [is that] it’s good to bring awareness and to get people to think about it.”

“We fall victim to that, too,” Shapiro added. “But if you can’t make fun of yourself, there’s no point.”

New England Classic
J. Cole’s ‘Forest Hills Drive’ Is Out Of The Woods
Why I Deleted My Uber App 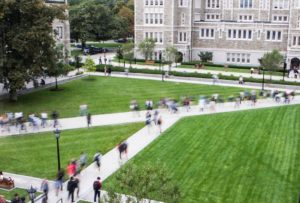