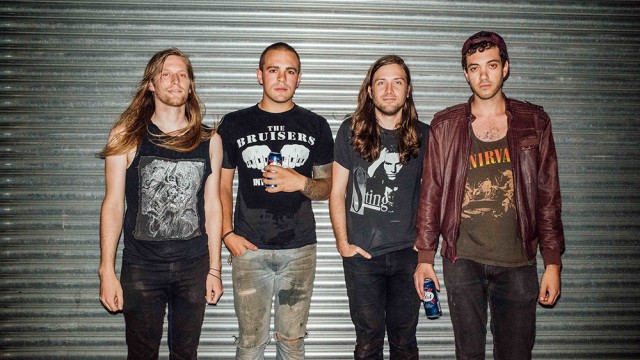 The punk band California X is a bit of a paradox. Maybe that is why they have the “x “in their name, for the unknown, the undefinable. You see, the boys behind the band—Lemuel Gurtowsky, Dan Jones, Cole Lanier and Zacky Brower-—are not from California at all. They were formed in Amherst, Mass. The second paradox comes in because California X defines itself as a punk band. They are not a punk band really, at least not on their sophomore effort, Nights In The Dark.

The punk rock genre has always been popularly defined by two characteristics: a lack of musical skill that transfers into a gritty guitar sound and a social consciousness that comes through in the lyrics.

California X has one of the two characteristics: dirty guitars, as the guitar is the main feature of the album. Unlike the punk rock heroes of the past, however, Gurtowsky can actually shred as lead guitarist. He is versatile with an ability to cross genres.

The heavy distortion and long, drawn-out notes at the beginning of the first and title track recalls that of the seventies art house rock bands. Then, all of a sudden the song explodes into a dirty, gritty, chugging guitar vehicle that seems as though it is a steam engine barreling towards its destination, ready to decimate all in its wake. This is complemented by the lead guitar that lies on top of it like a more experienced lover, whose sole purpose is to titillate. It works. This technique of lead guitar solos over a solid rhythmic guitar base, is one of the albums strongest attributes and is used and different times in many different ways throughout the album.

It is used on “Hedley, MA,” where the solo is structured as a scale and the underlying rhythm guitar part is relaxed and distorted, like a hazy drug fueled dream. Then, there is “Blackrazor Pt. 1, which recalls Metallica’s great guitar epic “One.” California X then reuses guitar techniques on the second part of this song, a separate track and the next on the album. It recycles the charging, chugging guitar idea on the title track, which connotes a lot of anger, befitting a song with the word “Blackrazor” in its title.

Then, there are the guitar tracks that break from the norm. “Ayla’s Song” is a one minute acoustic, instrumental track that holds more emotion than many of the other tracks on the album due to simplicity.

Conveying emotions, or emotional depth, though is where this album falters. This is what makes them fall short of being a truly great punk band: Their lyrics are the least important part of the songs. In contrast, seventies New York punks—people like Patti Smith and Richard Hell (of Television)—considered themselves writers above all else. Everything else, the hardened instrumentals, came second.

With these guys it seems the opposite. Their lyrics and potentially catchy melodies are drowned out by the overbearing, albeit good, guitar. There is no chance of an emotional connection. While at first listen one might be impressed by the striking instrumental complexities, the songs lack the complexity of a more complete work, which makes them listenable but ultimately forgettable.