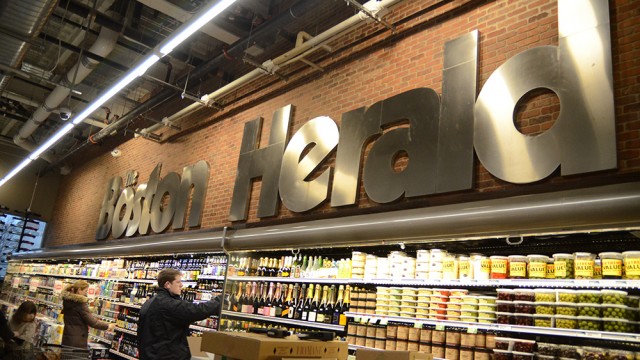 Now situated above a seemingly unending selection of craft beer, the large silver Boston Herald sign that once graced the brick wall of One Herald Square has a new home in the South End.

Last week, the popular natural foods grocery store, Whole Foods, opened the doors of its newest Boston location at the former Herald Harrison Avenue headquarters. Termed “Ink Block,” this South End location housed the local news outlets’ print, interactive, and administrative offices for 53 years. As of Jan. 9th, however, the bustle of printers and journalists has been replaced with the shuffle of soccer moms and shopping carts.

Although The Herald has been operating out of a new location in the Seaport since early 2012, it continues to leave its mark on the South End and Herald Square. Reminders of the building’s history can be found up and down every aisle of the store, including headline-inspired signs and typography. Items like spices and grains are noted in bold fonts that hang above aisles from a high, industrial ceiling. In addition to utilizing the newspaper’s old sign as a focal point of the store’s alcohol section, significant front pages from old Herald issues are used as backdrops for aisle and lane markers.

“The decor team for the North Atlantic region of Whole Foods Market worked closely with The Herald in developing the plan for the store,” Claire Davies, the location’s Marketing Team Leader and Community Liaison, said. “They felt it was only right to incorporate some of the historical elements in the design so you will see newsprint used as backing for signs over the registers and some of the decor is actually repurposed from the boxes of the old type sets.”

In addition to the Herald nods, the majority of the location’s design elements have all been created by local New England artists and designers. “Every store has a feel that reflects its community, so how could we not call back to the history of the building and its neighborhood?” Davies said.

On opening day, members from The Herald returned to Ink Block to see the transformation of their previous space. “We’ve had a long and successful run at the South End location,” Herald Publisher Patrick J. Purcell said when announcing the news outlet’s move to the Seaport in 2012. Purcell, who is a minority investor in the development of the Ink Block, celebrated the opening of the new store by handing out challah at the store’s bread breaking ceremony for its grand opening. “It will be a great part of the community, but I’m almost blown away by how much recognition of the Herald has been preserved,” Purcell said to The Herald.

The 50,000 square-foot, high-end, grocery store is the first of many construction projects to develop the neighborhood. Along with shopping at the new Whole Foods, South End residents will soon be able to dine at restaurants and live in apartments planned for the Ink Block.

The Ink Block project is the most recent venture of local company, National Development, which is based in Newton. National Development and managing director Ted Tye hope that the new Whole Foods sets the tone for the area, as an upscale and desirable part of the city.

This venture shouldn’t be hard to impose by the South End’s newest grocery store. In addition to the vast selection of high quality products common to all Whole Foods, the Ink Block store also includes a pressed juice bar, a ramen and noodles bar, and a full service spa.

Glass walls surround the in-store amenity, an auxiliary location of the Austin, Texas based milk + honey spa. Offering services ranging from pedicures to facials, the feature is not only a unique attribute of the new store but also aligns well with the values of its grocery partner, using natural and organic ingredients in all treatments.

“For every store we like to try out new concepts, so milk + honey and some of the other food venues you will see are unique to this Boston flagship store,” Davies said. “Everything is based on the needs of the community so yes, we are anchored in the South End but we want the store to serve greater Boston but all of this is based on the response we have seen in the entire city community.”

Although the store opened its doors just six days ago, it appears as if it has been operating for years, judging by the state of its operations. Shelves are constantly being restocked and the store’s 210 team members are available to answer whatever questions may come their way.

“This is my third store opening and by far this has been the smoothest,” Aelcio Santos, the location’s Baking Team Leader, who has been with the company for twelve years, said. “Everything is new and beautiful, even the bakery is offering more unique options like Mediterranean pastries and local breads,” he said as he gestured to the piles of baklava staked on newspaper-printed parchment paper.

The members of the South End community are embracing their new grocery store as much as it has worked to embrace them, as well. The response to the Ink Block Whole Foods on social media alone is overwhelming, and the store has received countless positive phone calls in its first few days of operation.

Claire Davies was enthusiastic about the community’s response.

“We are hoping that people come in because they are excited about the buzz surrounding the store but hope they stay as they learn about everything that makes us Whole Foods Market,” she said.